With Immense Data Having Being Collected In Previous Sessions, Keeladi Gears Up For Sixth Round Of Excavations In January 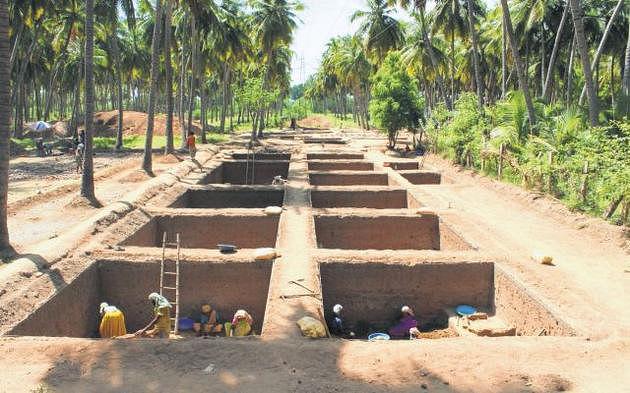 With the five seasons of excavations at Keeladi in Tamil Nadu providing a rich haul of material and data about the past, the next excavation at the spot would begin by the end of January 2020, said K Pandiarajan, Minister for Tamil Official Language and Tamil Culture, here on Tuesday (29 October).

"The Central Advisory Board for Archaeology has given permission for excavations at Keeladi in the Sivaganga district, Kodmanal (Erode), Sivagalai and Adichanallur (Thoothukudi)," Pandiarajan told IANS.

The Tamil Nadu government has allocated Rs 2 crore for excavations and field studies. The government will collaborate with reputed institutions in the fields of archaeo-botony, molecular biology, population genetics, environmental archaeology and linguistics archaeology.

The materials gathered during previous excavations indicated that Tamil civilisation is about 2,600 years old.

According to the state government publication, "Keeladi - An Urban Settlement of Sangam Age on the Banks of River Vaigaia", six samples of antiquities sent to Beta Analytic Lab of Florida, USA, for accelerator mass spectrometry were found to belong to 6th century BCE and 3rd century BCE.

The government said as there was considerable deposit below and above the dated layers, the Keeladi cultural deposit could be dated between 6th century BCE and 1st century CE.

According to noted archaeologist K Rajan, the recent findings at Keeladi answers to several hypotheses that were held till date.

Earlier, the date of Tamili (Tamil-Brahmi) was considered as 5th Century BCE. This was based on radiometric dates recovered from Kodumanal, Alangulam and Porunthal excavations.

"But the recent scientific dates obtained from Keeladi findings push it back to another century -- 6th Century BCE," the state government said. Based on samples it could be said people have been living in Tamil Nadu for 15 lakh years.

The Keeladi excavation ascertains that the people of 6th century BCE had attained literacy or learnt the art of writing Tamil-Brahmi that were evident from several potsherds that were found.

Similarly, the earlier hypothesis was the second urbanisation didn't happen in TN after the early historic phase that began in 3rd century BCE.

But the excavations at Keeladi of brick structures suggest the second urbanisation did happen in the state at 6th century BCE as in the Gangetic plains.

During the five seasons of excavations, over 14,540 samples were taken out.