With Rafale Done And Cornered, India Launches Search For Another Fighter Aircraft 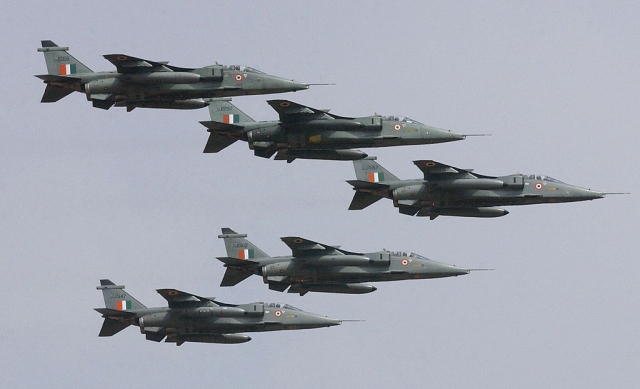 Five Jaguar aircrafts in an arrowhead formation of the Indian Air Force fly over the Yehlanka Airforce Base. (Photo Credit: INDRANIL MUKHERJEE/AFP/Getty Images)

According to the Diplomat, Indian Defense Ministry has issued a Request for Information (RFI) to global aircraft manufacturers, seeking application from those interested in constructing a medium, single-engine fighter jets for the Indian Ari Force (IAF). The move comes after the government cleared a long stuck deal for the off-the-shelf purchase of 36 Rafale jets from French manufacturer Dassault Aviation on September 23.

The India Air Force is currently dealing with a serious shortage of fighter aircraft. A portion of those currently active in the IAF’s fleet, including MiG21Bison and MiG21MF, are approaching the end of their life-cycle and will be retired soon. Over 245 Mig21s and 120 Mig27s are set to retire from IAF between 2017 and 2022. The retirement of these Soviet-era jets will further reduce the number of operational fighter aircraft in the Indian Air Force.

‘The new fighter program is meant to replace 11 squadrons (one squadron equals 18 aircraft) of the Russian MiG 21 and MiG 27 aircraft, which are retiring in the next ten years. The Indian Air Force is already facing a shortage of combat jets as it has around 33-34 operational fighter squadrons, while officials believe they would need 45 squadrons in a hypothetical confrontation with China or Pakistan,’ Vivek Raghuvanshi, writing for the Defense News, noted.

The Indian Air Force is in need of approximately 300 new light combat aircraft to reduce the shortfall. Among the planes expected to be in the running are Lockheed Martin’s F-16 Block 70 and Saab’s Gripen E.

According to analysts, the production of Tejas and the development of Fifth Generation Fighter Aircraft (FGFA) with Russia will not be affected by the purchase of new aircraft.