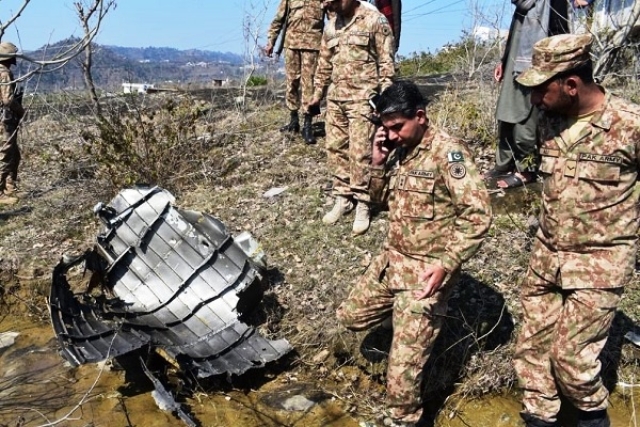 The wreckage of a Pakistani F-16 jet believed to have been shot down by an Indian MiG-21, has been found, according to media reports.

A picture of the wreckage of what is believed to be the Pakistani F-16 jet was posted by news agency ANI on Thursday (28 February).

The picture allegedly shows a portion of downed Pakistani Air Force jet. The wreckage has reportedly been found in the Pakistan Occupied Kashmir (POK).

According to ANI, commanding officers of Pakistan Army’s Northern Light Infantry are also visible in the pic.

This is the wreckage of the downed Pakistani F16 from yesterdayâs failed PAF raid https://t.co/wCQNlfV5V0

Notably, the same picture is being ciruculated on the social media saying that this is an Indian MiG fighter. However, multiple IAF sources confirm that this is the wreckage of the Pakistani F-16 jet downed yesterday, the news agency said.

Same picture circulating on social media claim this is an Indian MiG fighter, however multiple IAF sources confirm this is the wreckage of Pakistani F16 downed yesterday https://t.co/C7t5lYtP51

The news agency has also tweeted a picture comparing the portion of the downed aircraft with the engine of an F-16 aircraft.

Earlier, the Ministry of External Affairs on Wednesday (27 February), in a press conference, had confirmed that a fighter jet of the Pakistani Air Force was shot by India after Pakistani unsuccessfully tried to target military installations on the Indian side. India also lost a MiG fighter jet in the engagement.