Year After Cattle Smuggler Was Killed By Vigilantes And His Family Paid Lakhs By State, Son Held For Same Crime 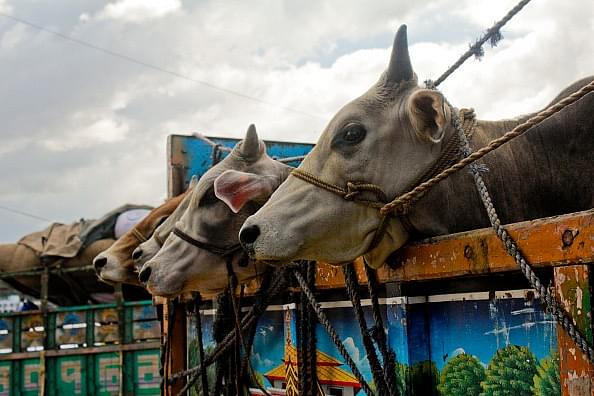 Despite the family receiving several lakhs in compensation from both the governments of Rajasthan and Haryana, cow smuggler Ummer Khan’s son, Maqsood Khan has now been arrested by the Rajasthan police for the same crime, The Times of India has reported.

Ummer Khan was allegedly shot dead by cow vigilantes in November, 2017 in Alwar's Khaidili area while indulging in cattle smuggling. However, on Tuesday (21 January), the Rajasthan police arrested his son, Maqsood along with five other alleged cattle smugglers.

The police said all six of them -- Liyaqat Khan, Shabbir Khan, Sameen Khan, Asroo Khan, Irshad Khan and Maqsood -- have multiple cases of loot and attack on police personnel registered against them across Rajasthan and Haryana.

Umesh Beniwal, station house officer (SHO) of Khaidili police station, told the media that they received information about cow smugglers around midnight on Monday. When they reached the place where cow smugglers were said to be, they found Maqsood and others with their vehicles. They were arrested after questioning.

“We found one country-made pistol, nine live bullets and 40 bottles of alcohol in the car,” The Times of India quoted Beniwal as saying. Beniwal further said, “In last three months, we had multiple confrontations with the alleged cow smugglers in the area. Sameen and Asroo are the main players of this gang and Maqsood also works for them.”

News18 quoted the SHO as saying that a vehicle recovered from them looked like a water tanker from outside but it was actually used to smuggle cattle. He said there was a door at the back of the vehicle to let the cattle in and pegs were also there inside to tie them down. The tanker is reportedly a modified Tata 407 truck.

He said these smugglers would feed cattle liquor which would render them incapable of protesting or making a sound when being transported. Since water tankers are not checked by police, they would easily get away.