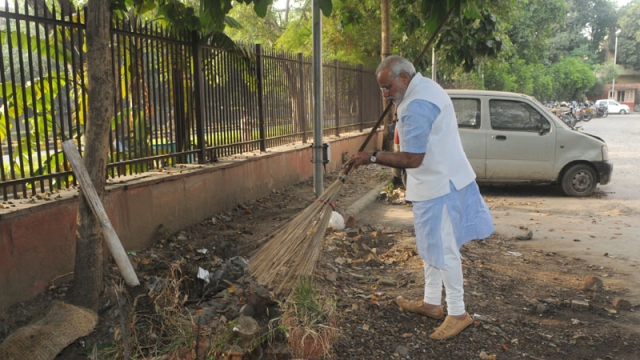 The great student leader of the great Jawaharlal Marx University has told us that a certain Lenin is his hero. Now this Lenin was a violent, murderous, cruel fellow who did great damage to his country, Russia, possibly setting it back at least a hundred years. The fact that Lenin is a hero to at least some young people in the country is worrisome.
The silver lining in the dark cloud is that most students in India attend colleges and universities which are not infected with antiquated, failed, violent ideologies.

Most of our young people are not into grievance-mongering or into exaggerating their handicaps or into maintaining a posture of antipathy towards the Indian State. Many are looking for opportunities to get ahead, to achieve something constructive and to overcome their constraints, not wallow in them.

This then should remain a source of optimism.

The other thing that makes for sanguine feelings about India is that there is an emerging continuity in the intellectual and political tradition from Chandrashekhar, through Narasimha Rao, Vajpayee and Manmohan Singh right on to Modi. Poor Manmohan Singh. He actually wanted to auction telecom spectrum and coal mines. He wanted GST and greater FDI in different sectors. He was against silly environmental fanaticism (remember his diatribe against the Kudankulam-baiters?). He pushed for Aadhaar. Unfortunately for him, not only an obdurate opposition, but forces within his own party and his own coalition, successfully stymied him.

Senior members of his own government worked to create an environment of fiscal indiscipline, hostility to business (remember retrospective taxes?), conferment of exaggerated and impossible-to-achieve rights on a hapless citizenry (right to all kinds of things which the government would promise and not deliver), active encouragement of otherwise unimportant activists to sabotage Manmohan’s plans (remember Posco? Our Prime Minister personally made promises more than once to the Korean Prime Minister and was not able to live up to those promises), intense turf fights between ministries and ministers (this more than even the Opposition probably got Aadhaar only half-done)—in short, Manmohan was opposed by an Opposition that now, when in government, embraces many of his positions and in this Modi is not being actively sabotaged by elements inside his tent.

Manmohan was also the victim of corruption among his colleagues and their penchant for patronizing their favorite crony capitalists. Modi has successfully banished fixers in the corridors of Delhi. He is letting the market determine success and failure—and we know that the market does a very good job of that.

The frothy fiscal excesses of UPA 2 have been abandoned. We may miss our deficit targets—but this will not be a conscious strategy. Projects will proceed despite the best efforts of random NGOs to stop them. The government now has a conscious mindset of trying to be friendly to legitimate businesses, not just to cronies and supportive of genuine entrepreneurs. We will not become another Brazil, either in terms of fiscal profligacy or in the realms of high-level corruption.

Our government leadership has embraced continuity in policy where it makes sense, even if earlier such policies had been opposed. We are therefore pragmatic apropos of FDI, and the Aadhaar. Benefits Transfer through Aadhaar and semi-dormant bank accounts opened up as part of the Financial Inclusion project, may end up giving us not only enormous gains in cutting waste and corruption, but by putting real cash into the accounts of millions of citizens, may end up being the ultimate vote-winner of the 2019 elections. We have always known that if the tens of thousands of crores of rupees that we have spent for so many decades on poverty alleviation had not been wasted or siphoned off, we would have got rid of “garibi” long ago. There is a high probability that this might just happen now.

Another source of optimism is the uncanny realism that one can notice in the public pronouncements of our leaders. Jaitley has praised Narasimha Rao. Jaitley has openly talked about the “lost decades” when other countries pulled ahead. He has openly admitted that double-digit growth rates, while a desirable objective, will be difficult to achieve, given the sluggish international economy. I have not witnessed such candour and realism in a long, long time.

Modi has gone one step further. Whether it is in cleaning up our very dirty country or in improving gender justice, he has made it clear that the achievement of national goals will depend not just on what the government does, but on the active engagement and involvement of all citizens. This may be a first in our history where agency is sought to be passed back from the mai-baap sarkar to ordinary citizens.

Success will be difficult as the previous dispensation has fed us so many lies about absurd “rights” that we are supposed to have in theory and never in practice. But if we are playing a multi-innings game and if we are really serious about aiming for a prosperous India, this idea of a pact that involves, animates, excites and energizes citizens is really the only way to go. Because the path will be difficult and because we have been overfed with a silly and impractical set of slogans on “rights”, does not mean that we can run away from this task. We must put our shoulders to it.
What about areas where we could do with a little more sensible attention?

The government is still being coy about getting rid of “retrospective tax terrorism”. One wonders what exactly are the political compulsions that force us into half-hearted compromises. The bureaucracy still has a field day trying to undo, as many of the government’s business-friendly measures as the mandarins possibly can. The pusillanimous approach to Genetically Modified crops has been a great disappointment. This is going to ensure that India falls behind not just China in agricultural productivity, but even behind Bangladesh. Not embracing change and new technologies out of cussed obscurantism may end up proving very costly for us.

The pseudo-economists around Indira Gandhi wasted many years pushing us into adopting “appropriate technologies”. The same pattern seems to be getting repeated with GM and agriculture. The recent spat with Monsanto also remains a mystery. Quick stroke-of-the-pen decisions based on private conversations among civil servants in the dark corners of government offices, rather than openly debated and discussed measures, are eerily reminiscent of Indira Gandhi and the MRTP/FERA days when laws were passed not based on economic logic, but in a whimsical manner. And let’s remember, these laws set us back by decades.

The UPA inherited the following from Vajpayee: low inflation, combined with low interest rates, burgeoning tax revenues, a declining fiscal deficit, a high savings and investment rate, a declining BOP deficit and a positive environment for business. When Modi took over, the legacy he received was high inflation accompanied by high interest rates, sluggish tax revenues, widening fiscal deficits, declining savings and investment rates, a widening BOP deficit and a very negative environment for business. It is churlish and actually silly to ascribe Modi’s success in reversing the trend only to the decline in oil prices. A UPA government would in all probability have squandered that opportunity by more extravagant indulgences and appeasement of insatiable grievance-mongers.

By sticking to the better aspects of the Chandrashekhar-Narasimha Rao-Vajpayee-Manmohan (I mean, the better Manmohan!) tradition, Modi has enhanced his position as a statesmanlike leader and has significantly increased the odds in India’s favour. The balance is certainly on the side of optimism. For several years now, I had given up on the prospect of poverty being eliminated in India in my lifetime. I now believe that there is a decent chance of this happening. And the pattern of policy continuity that I referred to earlier, gives me hope that we have an excellent chance of succeeding in doing it in a sustainable way and avoiding the flash-in-a-pan performances of the countries of Latin America.