A Rather Rosy Picture 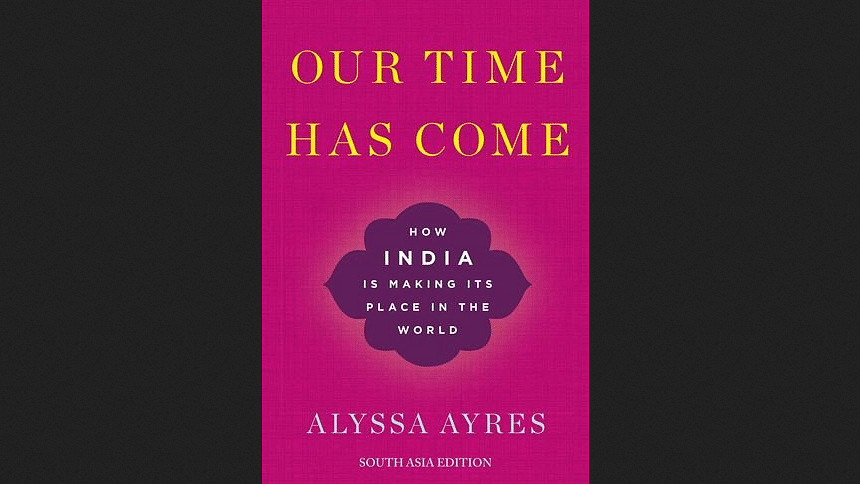 Cover of the book Our Time Has Come.

Ayres brings the reader a nuanced understanding of India, but is it a tad too much of a feelgood book?

Alyssa Ayres’ book dwells on India as an emerging major power on the global stage driven by its size and economic growth. Ayres paints the picture of a confident nation that is today willing to take a stand on global issues based on its perceived self-interest and well laid-out principles. Notwithstanding her optimism, the title is premature even if well-intentioned.

Ayres has strong credentials to write on this subject, given her close-to-three-decade association with India, including serving as deputy assistant secretary of state for South Asia during 2010-2013 in the Barack Obama administration. Maybe because of her long association with India, she has a sympathetic view of our nation, whether it is in its relations to Pakistan or China or its dealings with the US, and the work comes across as a feelgood book. While it lays out the case for India’s rise, it glosses over some of the challenges that exist. More on this later.

First, the book is a very easy read and not steeped in bureaucratese. Anyone can pick it up to get a good understanding of the evolving nature of India’s foreign policy, India’s ambitions and role on the global stage and how there is a continuity not only with India’s heritage and history but also from one government to another.

Second, the book, divided into three parts and eight smaller chapters, is well-sequenced. The first part is India’s past. Ayres looks at how India’s statecraft, foreign policy and terms of engagement with the world has its roots in ancient India and its heritage (Chanakya, Arthashastra, Swami Vivekananda). She quickly moves to post-independent India, how its policies have been shaped by the worldview that the country has had and how things have changed since India opened up its economy in 1991 and also the collapse of the USSR.

The second part is about an India seeking its rightful seat at the global table of large nations and institutions and India’s ambition to be recognised as a global power. But India remains hesitant to play the role that other countries, particularly, the USA, would like India to play. Ayres sees India as a cautious power refraining from explicitly intervening in other countries’ issues as a matter of principle. India appears as a country that wants to have a seat at the global high table but is not willing to share all the responsibilities that come with it.

The last part looks ahead and envisions how India’s role in the world is set to change over the next 20-30 years as it grows to become one of the largest economies in the world. Ayres speculates how India could behave when it has the economic might, by drawing a brief parallel in how the Indian cricket establishment has used its power in world cricket administration. That vision of trying to hold the rest of the cricket establishment hostage to its demands would not be comforting to India’s friends.

The last section also has practical suggestions for any US administration on how to deal with India. Ayres says that India should be looked upon as a joint venture partner and not an ally who will unquestioningly side with the US in each and every decision. India will not be anyone’s poodle, whether in climate change talks or WTO negotiations. Even as India continues to strive to be a part of the decision making countries in global institutions in sync with its size, it is also working with other developing countries to set up new institutions like the BRICS Bank, notwithstanding its troubled relations with China.

Ayres brings to the reader a nuanced understanding of India, which is one of the biggest strengths of the book. For example, she points out that India’s ancient texts do not put the country at the centre of the universe, but one of the continents, which is very different from how China sees itself. The influence of this worldview and the Arthashastra is visible in India’s foreign policy. If anything, former foreign secretary Shyam Saran, in his excellent book, How India Sees The World, rues the fact that we have not paid enough attention to the repertoire of knowledge on statecraft in some of our ancient texts.

The second thing that stands out is the Narendra Modi government’s decisive and bold steps which make it markedly different from its predecessors. There is a change of pace and a sense of urgency as the following examples will show. Modi became the first Indian prime minister to skip the NAM (Non-Aligned Movement) summit completely. Even while improving relations with Israel, Modi has strengthened relations with the Middle East. Modi spoke at the inauguration of the first World Sufi Forum attended by Islamic scholars from 20 countries and highlighted India’s syncretic traditions. At the same time he has projected India’s soft power through yoga and use of Hindi when travelling overseas. In 2015, India announced building a base in Seychelles — a first for India.

The book falters in three areas. First, the economic backdrop which is discussed lacks depth, is often stereotypical with some notable omissions. For example, the demographic dividend that Ayres discusses can well turn into a disaster. Given the stress points in our society and rising demand for reservations from sections of the society that one would consider well-off and powerful (Marathas in Maharashtra, Jats in Haryana, Patels in Gujarat), this subject needs a deeper discussion.

Also missing is the issue of the poor health of the population. Malnourishment in more than 50 per cent of children and poor maternal health have devastating consequences for the population and healthcare costs for the nation, a subject that cannot be ignored in any discussion on India.

Ayres sees the tradition of politicians wearing khadi as the nationalist appeal of the fabric, whereas most Indians would see it as the sign of a hypocritical venal politician even as khadi has emerged as a fashion choice among the elite. The author forgets to mention the economic reforms undertaken by the minority government from 1996 to 1998 when P Chidambaram was the finance minister.

FveAyres believes that the Indian economy is not as open as its peers. But if laws are compared sector by sector, India is most likely more open than any other large country in Asia. India stumbles in implementation as rules and regulations in the hands of the bureaucrats make it a nightmare to navigate the Indian system. The book points out that until 2006, foreign direct investment (FDI) in retailing was prohibited, but misses to mention that until 1996, there was no restriction on FDI in retailing. Similarly, the discussion on Bangladesh’s success in garments exports has been reduced to just labour laws, when the subject is more complex. It feels like many of these issues have been mentioned in the passing with clichéd arguments or causes being highlighted.

While discussing the Rashtriya Swayamsevak Sangh (RSS), Ayres sees the organisation from the prism of Hindu nationalism, but misses out that the government that had banned RSS after Mahatma Gandhi’s assassination, invited RSS to be part of the Republic Day Parade after the 1962 India-China war. There is no substantive discussion on historical India-US relations and the reasons for mistrust between the two countries. A second area where the book falters is that there is no critical assessment of the foreign policy of the Modi government. Also much of what is said about what this government is trying to do reads like a PIB (Press Information Bureau) press release. This seems unfair given the achievements of the government. Lastly, Ayres does not draw too much from her own experience in the government or at least doesn’t share it with her readers and that is disappointing.

Minor quibbles and misses aside, this book is a good easy read to understand the drivers of India’s ambitions on the global stage, India’s foreign policy and what India, one of the oldest civilisations and the world’s largest and most diverse democracy, has to offer to the world. It will hopefully help in improving the understanding of India in the US. And whether India’s time has come or not, the West would certainly like to see India deliver on its potential.