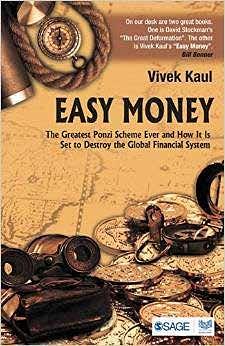 The final part of Vivek Kaul’s ambitious trilogy raises questions that all those who believe in free markets are struggling with.

My heart quailed when I was asked to review this book in four days. After all, this wasn’t fiction. How could I plod through 344 pages, all about money and financial markets, in just four days? My pleading got me only another two days.

Well, the review got written in the original four-day deadline. Fiction the book isn’t, but it turned out to be quite a racy read. For those not familiar with Vivek Kaul’s writings, he’s known to begin articles on fiscal deficit with a dialogue from a Hindi movie and another on fluctuations in rupee value with a line from Sheila ki jawani, or whatever the latest chartbuster is.

He has a way of drawing in lay readers and getting them to understand and appreciate complex economic and financial issues. He brings that same quality to this book, employing a lucid style to explain esoteric financial instruments like option adjustable-rate mortgage and collateralised mortgage obligation and other such jargon.

But enough of style (though that’s what makes the book work); let’s get on to substance. The book I am reviewing is the third and final part of a trilogy, all called Easy Money and all with the same cover, though the colours change slightly. That’s not a good idea, since the cover does not number the volumes. The first volume, sub-titled Evolution of Money from Robinson Crusoe till the First World War, tracks the history of money from the days of the barter system till 1914. The second, Evolution of the Global Financial System to the Great Bubble Burst, takes readers through the post-First World War years, the ascendancy of the United States and its currency, and closes with the dotcom bust.

The third volume, The Greatest Ponzi Scheme Ever and How It Is Set To Destroy the Global Financial System, sets out in wonderful detail what led to the Crash of 2008. The Ponzi scheme in the title is Kaul’s way of describing how the United States provided an attractive export market to other countries (especially China), how they invested their surplus dollars back in set the stage for the bursting of the real estate bubble.

He also points out that no lessons appear to have been learnt from the dotcom bubble burst. “When a bubble as big as the dotcom bursts, what follows typically is a few years of restraint. But the conditions prevailing in America were such that the country was already moving towards the next bubble.” The low interest rates and the easy credit policy, he notes, were away of countering the effects of rising income inequality in the United States.

It’s a bit of a frightening picture Kaul paints. The biggest and most respected names in the financial world, in whom people have blind trust, are shown to be behaving in an extremely irresponsible manner. Hedge funds and government treasuries invested in overhyped financial products with little knowledge of what they were getting into, blinded by the triple-A ratings.

The book raises questions all those who believe in free markets are struggling with—how much can be left entirely to the markets, what the role of regulators and government should be. Regulations work only up to a point, Kaul notes, with regulators often out-manouvered by market players and sometimes even turning a blind eye to shenanigans, as happened in the Bernie Madoff case. In fact, there is one school of thought that does not even want independent regulators, since they are so vulnerable to capture by those they seek to regulate.

Kaul also flags the “too big to fail” issue— when companies grow so large that any failure (especially in the case of financial companies) can take the entire economy down. Should the government regulate their size and forcibly break them up? If they do grow too big, should the government rescue them in the case of failure? Will this not lead to crony capitalism? The book also strikes a sombre note, pointing out that the opportunity to reform the financial system in the wake of the crisis has been missed. All in all, a thought-provoking book.