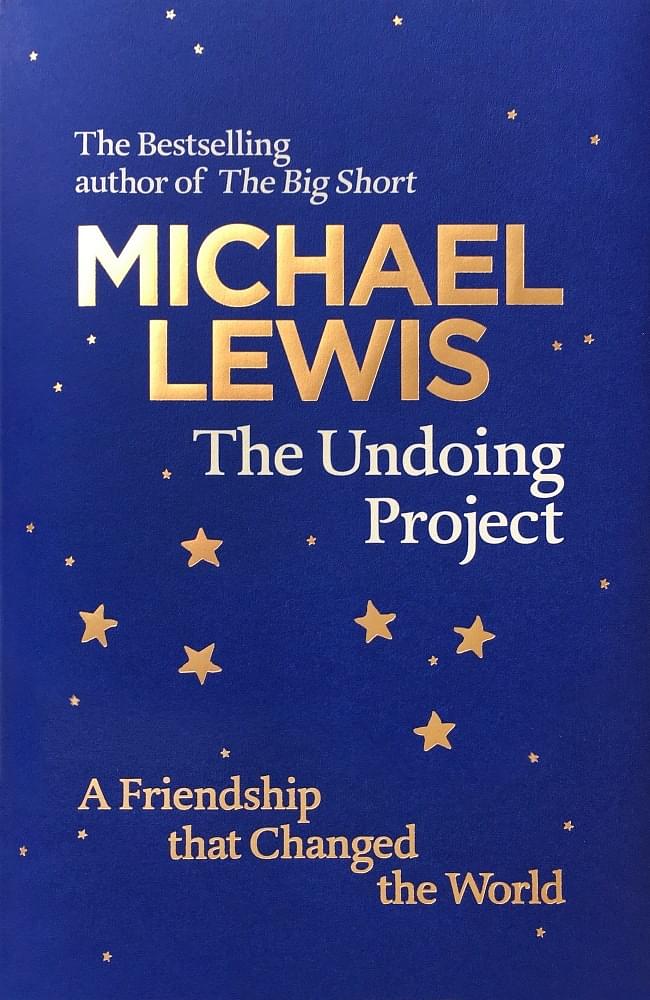 I spent a large part of 2016 following the American election and then trying to understand Trump’s shocking victory. Since Trump defied the odds (and the polls) to come out on top, a lot has been written about how and why this happened. Why is so much conventional wisdom bullshit—across industries? Why are so many industries ripe for disruption? Why is there so much to be undone?

Michael Lewis’s new book The Undoing Project may provide some interesting insights on why gut instincts are often wrong.

It’s hard to believe that a book about Wall Street brokers or statisticians can be a Hollywood blockbuster, but Lewis has the uncanny knack of turning even the prosaic into spellbinding, humorous yarns. Thus Moneyball, The Blind Side, and The Big Short—stories about the market, had an audience excited and laughing about numbers, charts and economics. He humanises what we hadn’t imagined could be humanised—the abstract. His trick is to focus on the people in these stories; their behaviour is what he follows closely and reports on. And though his new book is a departure from his usual themes, this is perhaps his most ideal book to demonstrate the connection between our emotions, our minds and the decision making process—all of which have been the underlying themes in his books.

It was, in fact, only after Lewis had published Moneyball that he realised he had missed out on an even greater story that was lurking under it—the story of Amos Tversky and Daniel Kahneman, the first men to have offered an explanation for the psychology behind the key decisions we make: that it flows from our guts more than from any rational thinking.

It was a review of Moneyball that first alerted Lewis to the two psychologists Tversky and Kahneman. In the review, the critic had pointed out that what we witness in the story had been explored in academic papers decades ago by these two brilliant behavioural psychologists.

In an interview, Lewis said:

“I’d set out to tell a story about the way markets worked, or failed to work, especially when they were valuing people. But buried somewhere inside it was another story, one that I’d left unexplored and untold, about the way the human mind worked or failed to work when it was forming judgments and making decisions.”

Realising quickly that there was a tremendously interesting story to be unearthed here, he began writing the biographies of Tversky and Kahneman, but in his usual maverick way conceived The Undoing Project as a story of an intellectual friendship that changed forever how we view the mind, giving birth to behavioural economics. The subtitle of his book says it all wonderfully: “A Friendship that Changed Our Minds”.

In an interview with National Public Radio, Lewis summed up what the two men had been after.

“I think their central question is ‘How does the mind work?’ Not when it’s in an emotional state, but when it thinks it’s in a rational state; when it’s faced with a judgment or a decision to make, what’s it doing? That’s what they were interested in.”

Such dependence on randomness and our own gut responses dismantled traditional economic and behavioural science theories. And these brilliant men had described this as far back as the 1970s, but it is only now that psychologists and economists are beginning to see its application in both personal, individual behaviour, finance and politics.

Though cognitive psychology forms the background of the book, this is really a story of an intense and fierce friendship that began to, sadly, unravel as it progressed. Lewis follows their extraordinary intellectual bond closely, engaging the reader’s mind and heart.

Michael Lewis is a master story teller. I had met him in the Silicon Valley at a discussion of his previous book The Big Short. I was also fortunate to meet Daniel Kahneman at the World Economic Forum in Davos soon after the publication of his much talked about and less understood bestseller Thinking, Fast and Slow (the book is dedicated to Tversky). I learnt about the genius of Tversky through this book.

Only Lewis could have done justice to the unique story of these two very different but gifted minds. It won’t be long I’m sure before we hear of Hollywood making a movie version of The Undoing Project. Read it before you see it.