At A Time When The Dragon Is Raising Its Head, Victory Of A Friend In Japan Is Good News For India 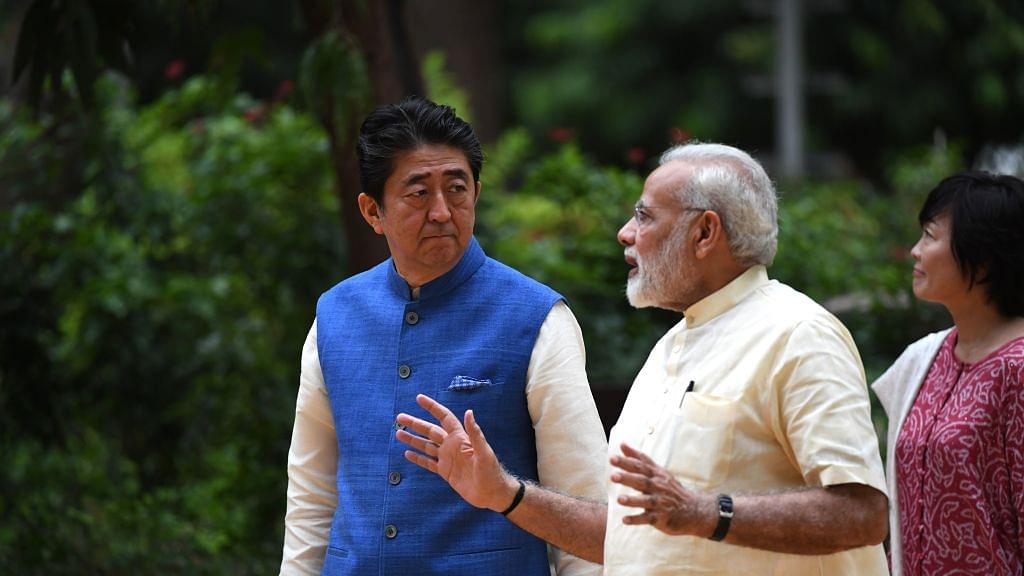 Just a few months back, Japanese Prime Minister Shinzo Abe’s political future was looking uncertain as his unpopularity rose and corruption scandals took the sheen off his governance agenda. But last month he bounced back and how! Abe’s ruling coalition won a clear majority with success in more than two-thirds of Parliament’s 465 seats, with Abe’s Liberal Democratic Party holding a majority even without its coalition partner. Abe’s gamble of calling snap elections paid off and he underlined that in his post victory comments: “We were able to earn the powerful support of the Japanese people, well surpassing our goal.”

Flush from his win, Abe went straight down to business by focusing on his priority: “My immediate task is to deal with North Korea,” Abe said. “It will take tough diplomacy. With the mandate given by the people, I would like to exercise my command in diplomacy.” Even during the congratulatory call from the US President, Donald Trump, Abe’s focus was on the need of being united to increase pressure on North Korea.

Along with a focus on the North Korean threat, a victory for Abe means a continuation of his earlier policies which include strengthening the alliance with the US, a more robust defence and foreign policy vis-à-vis China as well as a super-loose monetary policy. With a so-called supermajority in both houses, Abe can now move forward to push for a revision to Japan’s war-renouncing constitution, a long-cherished goal of his and his nationalistic supporters. While Article 9 technically bans the maintenance of armed forces by saying that “land, sea and air forces, as well as other war potential will never be maintained.” it has been interpreted by successive Japanese governments to allow the nation’s Self-Defence Forces for exclusively defensive purposes. As China’s regional ambitions rise and uncertainty over America’s willingness to continue contributing to regional security continues, Article 9 is viewed by some as something of an anachronism. Abe had set a deadline of 2020 to revise Japan’s constitution, though this remains a highly divisive issue.

Abe will be welcoming US President Donald Trump’s during the latter’s first trip to Asia while in office in early November at a time when China under Xi Jinping is shedding its reticence and is convinced of the inevitability of its emergence as a global superpower. And the Trump Administration’s chaotic foreign policy is causing consternation about the future of its commitments to Asia. Abe has invested a lot in reaching out to Trump but he has also developed other regional partnerships.

An assertive Japan will be welcomed by India. Of all of Japan’s neighbours, India is perhaps the most comfortable about its rise. The two nations already share a close relationship across various sectors—economy, defence, nuclear—and a personal chemistry between their leaders. Prime Minister Narendra Modi shares a close personal rapport with Abe which has only grown over the last three years. And Indo-Japanese partnership is key to maintaining a stable balance of power in the wider Indo-Pacific region. Abe always had a special place for India in his vision of the emerging order in the Asia-Pacific. Much before anyone else, he could foresee the need to view the Indian and Pacific oceans as a cohesive unit. In Modi he has found a kindred spirit. India-Japan ties have got a boost from the personal camaraderie of Abe and Modi. Both leaders are emblematic of a new, ambitious and nationalistic Asian landscape. They have decisive mandates to reshape the economic and strategic future of their respective nations. And both have a vision for the region in which the Indo-Japanese relationship plays a central stabilising role.

India and Japan are keen on building a broader coalition of like-minded countries with the US and Australia to manage the unfolding strategic realities in the broader Indo-Pacific. Abe had articulated a need for such a security architecture way back in 2012 when he had suggested: “a strategy whereby Australia, India, Japan, and the US state of Hawaii form a diamond to safeguard the maritime commons stretching from the Indian Ocean region to the western Pacific.” China’s aggressiveness has only made this idea more tangible. This lies at the heart of New Delhi and Tokyo attempting to align Japan’s free and open Indo-Pacific strategy with India’s Act East policy in the wider Indo-Pacific.

India and Japan complement each other economically and this has allowed the two to leverage each other’s strengths. While Japanese investment in India continues to grow and India’s need for Japanese technology in Indian infrastructure sector keeps on expanding, India has also decided to send three lakh youth to Japan for on-job training for three to five years as part of the government’s skill development programme. India is the largest recipient of Japanese foreign aid. Japanese investment in India is booming with the Japanese making record investment in private equity and venture capital in India. Japan made an exception to its rule of not conducting nuclear commerce with any state that is not a signatory to the Nuclear Non-Proliferation Treaty (NPT), for India. The two nations are working on an ambitious programme, the Asia Africa Growth Corridor, which will find place in the Abe-Modi summit. With a Japanese commitment of $30 billion and the Indian commitment of $10 billion, the project is aimed at capacity building and human resource development in Africa as well as developing infrastructure and institutional regional connectivities.

While there has been a lot of focus on the bullet train project, the Japan International Cooperation Agency has been involved in the funding of the Delhi Metro, India’s biggest subway system, and has agreed to fund the next phase of the Mumbai subway. Japan is playing a major role in a number of high profile infrastructure projects, including completion of the ambitious Delhi-Mumbai industrial corridor, a Chennai-Bengaluru industrial corridor and a dedicated freight project in southern India. India has also invited Japan to invest in infrastructure projects in its northeastern region, where tensions with China loom large. India has expressed keen interest in buying Japanese ShinMaywa amphibious aircraft, the US-2i, a deal of around 15 planes worth more than $1.5 billion.

As Abe begins work on his ambitious agenda for Japan, he will find in India a reliable friend. And as Modi works to project India as a leading global power, he will find in Japan an important and powerful interlocutor at a time of unprecedented change in the larger Asian landscape. Delhi and Tokyo will need to continue to nurture this very important bilateral partnership and Abe’s victory augurs well for it.