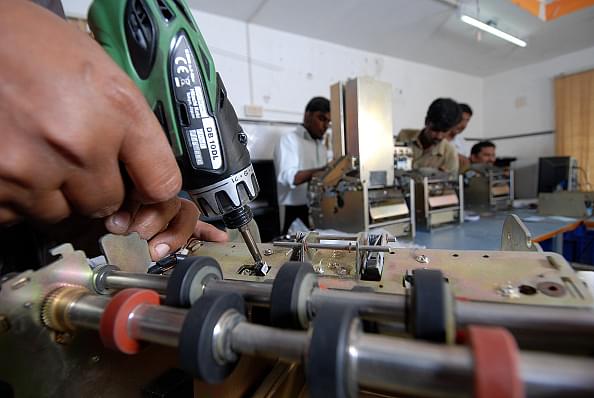 Not long ago ‘land of snake charmers’ was a widely-used epithet for India. By the turn of the millennia, it had a new sobriquet — land of IT engineers. By any metric of progress, this was a tremendous advance. Many economists, columnists and business leaders considered this achievement so unique, so path breaking and so mesmerising that they came up with new developmental paradigms around this alleged Indian exceptionalism. Aided by a ‘flat earth’, India was supposed to ‘leapfrog’ into a developed economy without investing in craftsmanship and manufacturing. An average twenty-first century Indian engineer would, much like the ancient snake charmer, travel the world, mastering and executing complex codified protocols using a ‘pungi’ made by someone else.

As an unprecedented global boom followed the dotcom crash, the dying public sector engineering firms and derelict factories were soon forgotten as fossils of a bygone era. In those heady days, missionary wisdom dictated that while China will remain the world’s factory, India, by unwittingly ignoring manufacturing, transition into a global software and e-commerce superpower.

Within a decade, this smug dream was shattered. Today, Chinese firms like Alibaba, Baidu and Tencent are among the world’s biggest Internet companies. More alarmingly, China is now competing with the US in the highly-sophisticated domain of cyber technologies such as artificial intelligence (AI), cyber security and data analytics. Chinese scientific output in these areas along with myriad other high-tech specialisations now dwarfs even Western counterparts. In the meantime, Indian services-led dreams have leapfrogged out of limelight.

China, like its peers earlier and most conspicuously US, have followed the usual track of mastering manufacturing and craftsmanship before propelling towards more sophisticated technologies. In hindsight, by not investing in manufacturing and craftsmanship during the boom era of last decade, India is now at an unenviable position — a monochromatic e-commerce dominated tech landscape and a steady cannibalisation of low-end manufacturing by technologies like 3D printing and advanced robotics.

The urgency of this problem is not hard to miss. Not surprisingly, the current political leadership announced the ‘Make in India’ initiative as a signature move. But now when India desperately requires skilled workers, it is facing a severe shortage of expert personnel. What makes this a tragic conundrum is that India is one of the largest mass-producers of engineers in the world. A culture that once deified toolmanship (shilpkala) with Vishwakarma is now tragically suffering from an acute lack of skill.

India’s deemphasising of craftsmanship is a recent affliction. Not long ago, the thriving Indian manufacturing industry was razed to the ground by the East India Company. Among the horror stories of the Raj are how the British soldiers wrecked the looms of Bengali weavers and broke their thumbs. Everything was done to systematically destroy India’s thriving textile manufacturing and export.

Indian manufacturing was the victim of a premeditated murder; it now needs to reincarnate.

The ability to create tangible objects from formless raw materials is one of the singular achievements of humanity. The ability to carve out wooden wheels, which helped us roll out of forests, to crafting tools to aid agriculture, to forging blades to slay tyrants, to finally constructing the jet engine — toolmanship is the hallmark of man’s ability to be the undisputed leader of this ‘pale blue dot’. As India’s economy shifts toward middle-income group, the need for skilled workers is evident in almost every aspect of Indian life.

The massive consumer classes of Indian mega-cities and the fledgling manufacturing industry are creating significant opportunities for skilled workers, but there is no workforce to take these opportunities. The shortage of skilled workers manifests in our everyday lives as we witness the deficient quality and finish of everyday items of indigenous make. From poor bathroom fittings, to chalta hai repairs, to annoying call drops, the lack of quality shows up in the life of an ordinary Indian in both subtle and overt ways. Apart from day to day inconvenience, the lack of skilled workers also imposes severe financial constraints on the Indian population. For example, many large-scale projects in India never seem to end!

In the defence sector India is at the receiving end of cartelisation by other superpowers who achieved nuclear and military technologies much earlier. This forces our government to invest billions of dollars purchasing the cast-off obsolete equipment of more technologically advanced countries. Such severe and often punitive economic and geopolitical costs are direct consequences of the cynical neglect of skills development, which should be entrenched in the DNA of our proud land of Viswakarma.

But, how to explain the dichotomy of lack of skilled workers in a country, which is the largest producer of engineering graduates in the world? The exponential growth of technology over the last century has led to the creation of multiple domains of technical excellence. Alongside the discipline of engineering exists a technology-specific discipline, often referred to as engineering technology, polytechnic or industrial technology. Take for example the mathematical precision with which rockets routinely place satellites on predetermined trajectories. For the common man, such feats of conspicuous accuracy would seem otherworldly.

However, technological marvels — rockets, modern computers and humanoid robots hide more than they reveal. The engineering aspect of rocket science concerns itself with the meticulous calculation of forces on the rocket, and computing the effect of hydrodynamic forces on the rocket’s trajectory. However, hidden in plain sight is the intricate craftsmanship, fabrication and assembly of the object itself. The near perfect alignment of thermal tiles, PCB boards that govern the function of the aircraft, showcase the melding of specifically related aspects of technology.

These proficiencies, although clubbed under the umbrella of engineering, are not the same as traditional engineering. More importantly, they cannot be interchanged and therefore, training and education requirements in these areas are distinct. This distinction is critical and failing to address it can lead to disastrous policy prescriptions.

The traditional engineering education is not meant to be a substitute for vocational training. Modern engineering education typically consists of gaining fundamental knowledge of mathematics and sciences before moving on to specific engineering components. This system is critical to producing practitioners, who can understand the ‘why’ and not just the ‘how’. Engineers seldom have a good knowledge of the very specifics of the systems they study in their classes. For instance, a typical electronics engineering graduate would not be able to repair a modern LED TV.

Similarly, in all likelihood a mechanical engineer would not be able to fix every problem plaguing a modern automobile. In spite of such contradictions, there is no changing of this mode of engineering education. However, the problem comes from viewing this type of education as the panacea to improve the technological prowess of a country like India.

This highly elite and prolonged process of imparting engineering education has specific purposes, but over emphasis on these can lead to unintended consequences. These include elevation of this mode as the only path to integration into the technical economy. This has led to almost consistent calls to expand the number of engineering colleges.

However, the prescription for success is simply the opposite — end India’s fetish with engineering degrees. India is producing far too many shoddy engineers while completely neglecting vocational training. We need polytechnic colleges, where the toolsmanship aspect of engineering is stressed.

Vocational training institutes, such as Industrial Training Institutes (ITIs), in India are plagued by reports of extremely poor-quality infrastructure along with serious allegations such as undermining of the accreditation processes. The result is that individuals graduating from these institutions must be retrained by employers. This is not feasible for all industries nor is it desirable.

More importantly, vocational institutes like ITIs are not aspirational, nor have they been able to set a benchmark for quality education. Therefore, the standalone ITI model should not be scaled up. To redress the educational shortcomings plaguing Indian technical training, the country’s elite institutions must admit an academic bifurcation within their engineering setup. They should lead this educational revolution by creating, under its aegis, Shilpalayas.

Shilpalayas, affiliated with and managed by eminent engineering colleges, can cater to the demand for industry-ready training by offering engineering technology related short-term courses and degrees. The curriculum of such integrated Shilpalayas, would be set with proper supervision from expert faculty and industrial partners which will have ready acceptability in related industries. The benefits of Shilpalayas will be manifold. As India’s engineering colleges themselves transition from teaching-centric to research-centric institutions, they will create ideal training grounds, and possible employment opportunities, for skilled workers.

This will be a shot in the arm for experimental research and development (R&D) facilities in elite academic institutes and will create a trickle-down effect. A separate faculty ladder and facilities would have to be created for the functioning of Shilpalayas. This process itself will trigger a massive employment opportunity.

At the societal level, we must develop a consciousness, which allows us to appreciate craftsmanship as an important and necessary skill and as a window to economic liberation for the masses. We must develop an appreciation for toolmen — the electrician, the mechanic and others. For millennia we have worshipped both devi Saraswati and Viswakarma. Somewhere as a society, we have forgotten the critical role of Viswakarma. Time has come to awaken him.

The article expresses the personal opinions of the authors.