Bangladeshi Hindus: Living On The Run 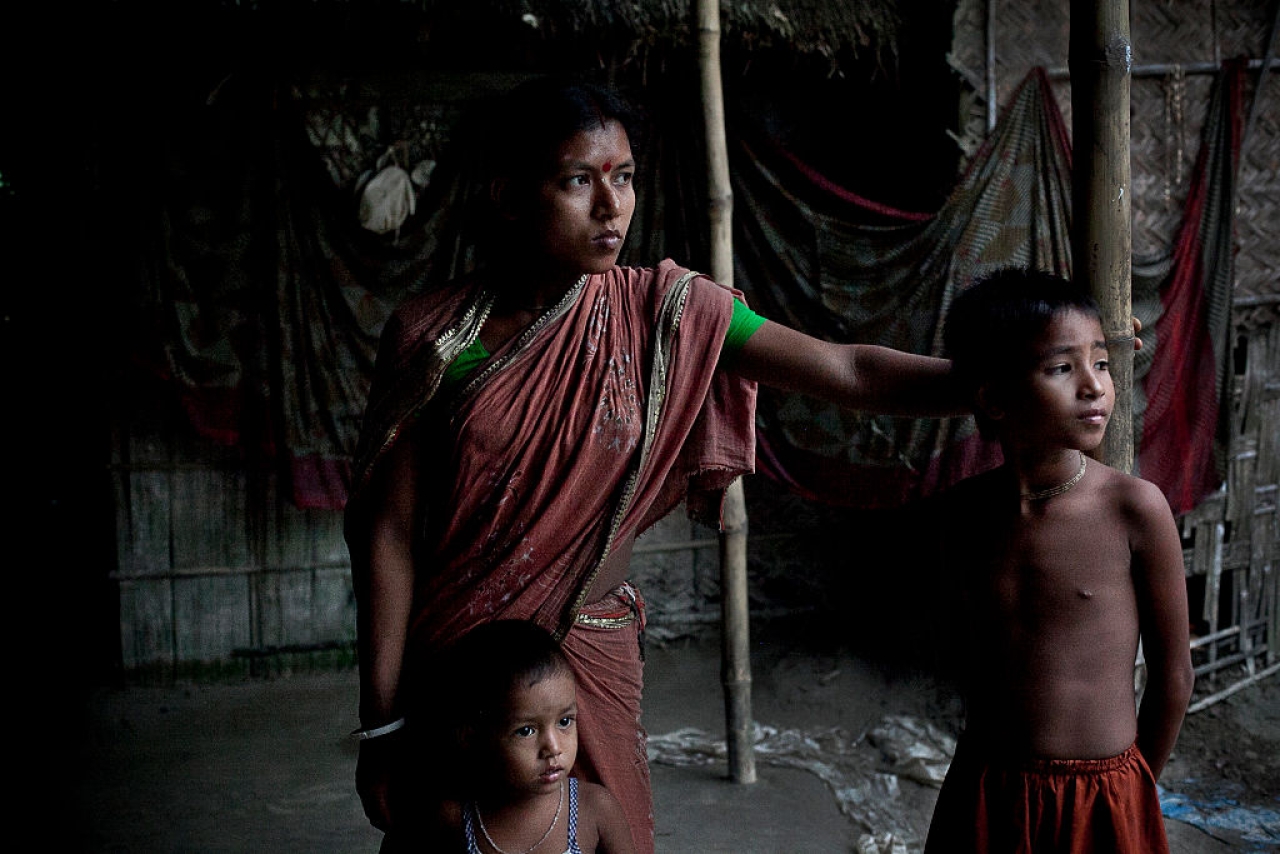 Gota Mari Indian Enclave resident Bobita Rani stands outside her home in Lalmonirhat District, Bangladesh. She and her family are Hindus and will be moving to India as citizens at the end of the month. (Shazia Rahman/Getty Images)

For many years now, Snehalata Roy has not been able to stack her saris neatly inside a cupboard, as she used to at her home in Ratirampur village of Rangpur division in northern Bangladesh. Not that she has many saris — only a dozen odd cotton ones, most with holes and tears that she has skillfully darned — but she doesn’t have the luxury of a cupboard. Anyway, her present address at Uttar Khagrabari in Bengal’s Jalpaiguri district is only a temporary one. She has overstayed her welcome at her distant cousin’s place and was intending to move on before the end of November (2018).

Snehalata Roy (45) and her family of five: husband Tapan (47), sons Subir (23) and Sukumar (21) and daughter Sharmila (18) fled Ratirampur in August 2012 after their house was attacked and ransacked by Muslim zealots protesting an alleged Facebook post by a Hindu man in the village. The post, deemed derogatory to Islam, was found to be a fake one later. But the maulvi of Fokiran Jame Masjid, just across the Paglapir-Badarganj Road passing through Ratirampur, gave credence to rumours about the fake post during his Friday afternoon sermon and incited the gathering against the Hindus living in Ratirampur. While no one was killed or injured, 10 Hindu houses were looted and destroyed. The Ratirampur Shiv Mandir was desecrated, but timely police intervention prevented attack on a nearby Durga temple.

The Roys lost their small grocery store — their only means of livelihood during that attack on Ratirampur on 24 August 2012. Before that, in 1974, about 20 bighas (one bigha is 33 decimals) of farmland that Tapan’s father Kamalakanta Roy used to own was confiscated by the government through the controversial and highly discriminatory Vested Property Act that allowed takeover of properties of people deemed ‘enemies of the state’. Kamalakanta’s elder brother Kumud Ranjan Roy had, in April 1971, fled to India after his 12-year-old daughter Sukanya was abducted by Islamists (and forcibly converted to Islam and married off to a Muslim cleric) supporting the then West Pakistani regime, which killed millions of Bengalis.

Kumud fled to Bengal’s Cooch Behar district and, later, migrated to Haridwar with his family. But even though Kamalakanta became the owner of the entire property, the government, ironically, headed by Sheikh Mujibur Rahman, the father of current Bangladesh Premier Sheikh Hasina, deemed Kumud to be the owner and since he had fled to India. He was considered to be an ‘enemy of the state’. After losing their farmland overnight, Kamalakanta set up a small grocery store, which provided him an income of less than one-tenth of what he used to earn from his farmland.

Dhaka University professor Abdul Barkat, who authored a seminal book titled Inquiry into Causes and Consequences of Deprivation of Hindu Minorities in Bangladesh through the Vested Property Act, says that 9.25 lakh Hindu families — or about 40 per cent of Hindu families in Bangladesh had their properties confiscated under this act until the year 2000. Nearly 7.49 lakh families, including that of Kamalakanta, were dispossessed of 1.64 million acres of agricultural lands they used to own (this was 53 per cent of the total land owned by Hindu families in Bangladesh and 5.3 per cent of the country’s landmass). According to the Bangladesh Hindu Bouddha Christian Oikya Parishad and Bangladesh Puja Udjapan Parishad, from 1965 to 2006, 2.6 million acres of land belonging to 12 lakh Hindu households were confiscated under this act. The act was reformed [it became vested Property Return (Repeal) Act] by the Awami League government in 2001 to return confiscated lands and properties to the original owners and heirs, but the implementation of the amended act has been extremely tardy.

The Vested Property Act of 1974 (it was earlier the Enemy Property Act, 1965) has been one of the major factors — others being religious, social and political persecution — behind the continuous exodus of Hindus from East Pakistan and Bangladesh. According to Dhaka University Professor Barkat, between 1964 and 2013, around 11.3 million Hindus left Bangladesh. Based on his 30-year-long research on Hindu exodus from his country, the professor says that the daily rate of migration was 705 before Bangladesh gained Independence in 1971. The rate of migration came down to 512 persons a day during the 1971-1981 period, and to 438 people a day during 1981-1991. But in the following decade (1991 to 2001), the number increased to 767 persons each day while around 774 Hindus left the country each day during 2001-2012. Tapan Roy and his family were five of them.

“My father had decided to stay on in newly-independent Bangladesh because he didn’t want to take the risk of fleeing to India with us. My elder brother Tarun was just four years old then, while my sister Tapati was three and I had just been born. Also, Sheikh Mujib had promised to make the country a secular one and ensure equal rights to all. But things turned sour soon and became terrible under successive military rulers who made Bangladesh an Islamic nation,” said Tapan, who earns a pittance doing odd jobs in Jalpaiguri town. His sons Subir and Sukumar slog as daily wage labourers at Mainaguri town, which is 3 kilometres away from Uttar Khagrabari.

Tapan shudders to think of the dark days in Bangladesh. “We (Hindus) were always treated as second-class citizens and from a very young age, we learned to treat Muslims as our masters and never offend them in any manner. We were always oppressed and were the subject of taunts and worse. Some Muslim neighbours of ours were kind, though, and they helped us. But they had to face warnings from the local maulvi and the radical Muslims. Life was getting terrible, more so since some local leaders of the jamaat (Jamaat-e-Islami Bangladesh) started making demands for cash from me and started taking things from my shop on credit. They never repaid and I was slowly going into the red. And then the attack happened. The jamaat men took the lead in it and they deliberately looted my shop and set it on fire. I had no alternative but to flee to India. There was no way I could have stayed back in Bangladesh. I had no means of earning, no land, nothing. I sold my small two-room house and the 2.2 katha land it stood on (one katha=720 square feet or 1.65 decimal) for just taka 1.5 lakh (worth about Rs 130,000 then). It was a distress sale and the buyer (a local leader of the Awami League) took advantage of my desperation to sell and migrate,” says Roy.

In late September 2012, Tapan and his family packed all their meagre belongings into four battered tin trunks and three cane baskets and started their journey to India. They paid a tout about 20,000 taka to help them cross the border. “We journeyed for about five hours north from Ratirampur by bus and then on foot to cover the 95km distance to the border with India. We met the agent and two of his people on the banks of the Teesta river and they took us by boat to Kuchlibari (the international border at this point is a notional line across the Teesta river that flows into Bangladesh from India) in India around 10 pm,” said Tapan. “Setting foot in India was like coming to the promised land. We felt free and emancipated immediately, it was as if we got a fresh lease of life. We touched our heads to the ground and cried in sheer joy and relief,” he recalls.

While planning his migration to India after losing his small grocery shop, Tapan Roy contacted his first cousins (Kumud Ranjan Roy’s sons) who are settled in Haridwar, but they asked Tapan to procure Indian documents first. “I would have to first enter India to procure the documents. But my cousins in Haridwar, who are in government jobs and businesses, did not want to take a risk. So, I got in touch with my wife’s second cousins in Uttar Khagrabri (their grandparents had migrated to India in 1947) and they agreed to host us for some time,” said Tapan. His elder brother Tarun died of measles when he was 19 and his sister Tapati is married and settled in Mymensingh (Bangladesh).

After crossing over to Kuchlibari, Tapan and his family were met by some men sent my Snehalata’s cousin’s husband, who owns considerable farmland and is involved in some small business ventures. These men took them in a vehicle to Uttar Khagrabari, some 52 km from Kuchlibari. “We have stayed with them (my wife’s cousin’s family) for six years now and it is time to move on. I will now go to my cousins in Haridwar and with the money I have managed to save, will try and set up some small business there,” said Tapan. In these four years, Tapan also managed to procure (through touts) ration cards and other documents for himself and his family. He has got himself and his wife and children enrolled in the voters’ list, but he is not too happy with the fraudulent means he employed to do so. “I would have preferred to go the legal way, but there is no legal way now,” he says. That is why, he hopes, the Citizenship (Amendment) Bill, 2016, gets enacted soon. The bill promises to provide Indian citizenship to Hindus, Sikhs, Buddhist, Jains, Parsis and Christians who have illegally entered India from Afghanistan, Pakistan and Bangladesh and stayed in this country for six years.

Before the end of November, the Roys will take a train to Haridwar and start a new life there. Tapan’s cousins have promised to give them two rooms in their house to stay in, and help him set up a business. Snehalata hopes one of the two rooms promised to them by her husband’s cousins will have a cupboard. She is tired of living out of the tin trunks.