Being The First Indian To Work On A Permanent Gallery Of South Asia At The British Museum Has Been A Real Privilege: Sushma Jansari 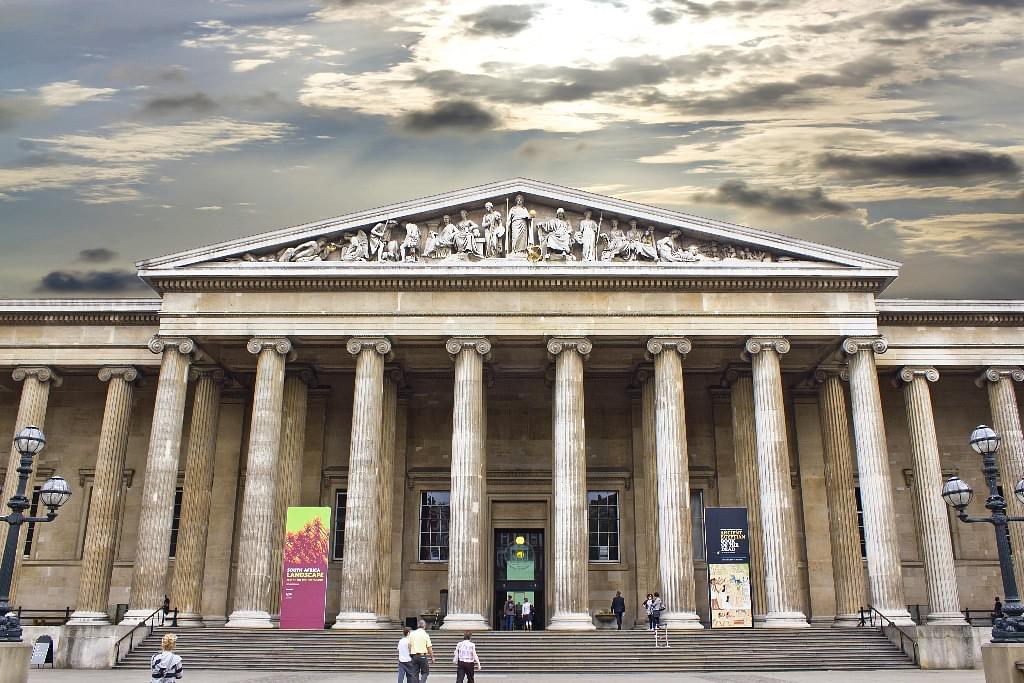 Dr Sushma Jansari is the curator of the Asian Ethnographic and South Asia Collections at the British Museum. It is one of the most iconic public museums in the world and has informed debate about how history and culture are collected and displayed since it first opened in the mid-eighteenth century. Deepika Ahlawat asks Dr Jansari about her work at the museum, and its continued relevance in today’s politicised and connected world.

Where do you work and how would you describe the work you do?

I am curator of the Asian Ethnographic and South Asia Collections in the Department of Asia at the British Museum. In this capacity, I am responsible for some 30,000 objects: the ethnographic collections, which are from Siberia in the north, to Sri Lanka and the Maldives in the south, and from Pakistan in the west to Japan in the east. In terms of the South Asia collections, more specifically, I look after the ancient material, most of which comprises sculpture and archaeological objects.

I knew the museum’s collections were vast and important, but nothing could have prepared me for their sheer size and scale. On my first day, I remember walking around the stores in a daze trying to get to grips with the tens of thousands of objects and wondering if they had chosen the right person for the job. As you can imagine, it was an overwhelming experience, but I took a deep breath and got on with it. Thankfully, I work with some fantastic colleagues, who are generous with their knowledge. This type of knowledge-sharing across the generations is especially important when you work with collections that have been formed over hundreds of years and which have moved between departments as the institution has evolved over the centuries. It is a real privilege to add to this knowledge and pass it on in turn.

It is in the nature of museum work that you are drawn in directions that extend beyond your core research area, and this is also what I have found at the British Museum. My work is as wide-ranging as the collections I curate and I have lots of opportunities to expand my knowledge. Recently, I have written about Sri Lankan collections made by the colonial official Hugh Nevill (1847-1897); an overview of the ancient-to-early-medieval Jain collections; and the collection history of the Siberian ethnographic objects. Happily, a lot of this work involves collaborating with colleagues at the museum and other academic institutions, and this is something I enjoy immensely.

I see it as a central part of my role to bring the collections, and the often extraordinary stories behind their acquisition, to the wider world. So, alongside gallery talks and writing for different audiences, I often share objects that are on display or which I am researching, on Twitter. The response has been great so far.

How have Indian art and India been seen, collected and displayed at the British Museum? How do you think this changes/has changed over time, political climate and intellectual zeitgeist?

People may be surprised to know that objects from India have been at the British Museum since it was established by an act of Parliament in 1753. I love the fact that it was created as the world’s first national, public and free museum, open to ‘all studious and curious persons’ – I know I fit that profile.

The museum’s Indian collections have grown exponentially over the last 259 years, from the original handful of exquisite mid-eighteenth century Mughal objects in the museum’s founding collection bequeathed by Sir Hans Sloane. Large parts of the Indian collections came to the museum during the colonial period, particularly, mid-nineteenth century onwards, when colonial officials brought objects back from India and donated them to the museum. Lots of other material, numbering in their tens of thousands, now resides at the museum’s sister institutions – the British Library and the Natural History Museum.

The sculpture at the museum is the most important collection held outside India. After all, it includes some of the sculpture from Amaravati. Don’t overlook the vast and wide-ranging ethnographic collection, as well as hundreds of textiles, historic and contemporary paintings, photographs, coins, medals, archaeological material and much more. It is hard to overstate just how incredible the collections are and just what a privilege it is to work with them.

In terms of contemporary collecting, we keep our collections up-to-date and relevant by acquiring modern works of Indian art. Artists such as Jamini Roy and Somnath Hore are represented at the museum and a sculpture by Mrinalini Mukherjee was purchased specially for display in the newly-refurbished Hotung Gallery. We also have paintings by Rabindranath Tagore. In the last year alone, colleagues have exhibited diverse historic and contemporary objects, including newly-commissioned masks, from Assam; a recent donation of nineteenth century Indian popular prints; and a ground-breaking exhibition using interactive technology to display a double-sided relief from the stupa at Amaravati.

Although I am an ancient historian at heart, I have long been interested in the collection history of the museum’s South Asian collections more broadly and continue to research and publish on this subject. It is one of the ways I engage with the collections to explore and navigate the difficult and problematic issues surrounding colonialism and the museum. This month, a colleague at the University of Brighton and I were awarded a grant to enable a student to study the South Asian collectors represented in the museum’s collections. This is a new direction for collection history research at the museum and I am keen on the results of this study to influencing future studies and displays.

What is the particular project you are working on?

For the last two years, I have been working with a project team on the refurbishment of the Sir Joseph E Hotung Gallery for China and South Asia, which reopened in November 2017. It has been a wonderful opportunity to rethink our collections and display in light of the many changes that have taken place in scholarship and museology over the last 25 years. It was a once-in-a-career opportunity to work with the full range of the museum’s spectacular ancient and medieval South Asian and Sri Lankan collections, and to develop a new, broadly chronological narrative for this period. Our collections are such that the whole history of South Asia can be told, from the Paleolithic period to the present day, and this is what we have done. The gallery was last refurbished in 1992 and the new displays will also be in place for some 20 years as well. So, no pressure! Being the first Indian to work on a permanent gallery of South Asia at the British Museum has been a real privilege and a personally important and emotional experience too. On a lighter note, I wrote most of the 150-plus labels listening to Bollywood songs, so who knows if that has had an impact too!

I curated half of South Asia, from the mid-third century BC to the twelfth century AD, as well as a section focussing on Sri Lanka. There are over 700 objects in my section and one of the things I wanted to do was draw links between some of this ancient material and contemporary India, including the Indian diaspora in the UK – a community of which I am a part. I felt this was important for various reasons, not least because the ancient world resonates in so many different ways in the present day. Also, many of our six million annual visitors, who come from around the world do not have deep knowledge of Indian history, so I hope it will give them something extra to learn and think about when they see the displays.

I’ll give two brief examples. I show the links between Ashoka and newly-independent India by displaying banknotes, coins and stamps issued soon after independence and which bear the national emblem of India – the Lion Capital of Ashoka – alongside the Ashokan inscription. In another section, which focuses on Jain sculpture from western India, I have included photographs of the jina images and architecture in the Jain Centre in Leicester – the first Jain temple to be consecrated outside India – that were carved more recently in western India. In this section, I also talk about the Gujarati diaspora, which arrived in the UK and settled in Leicester after expulsion from East Africa in the 1960s and 1970s. This is the story of my own family’s journey.

My next project is also gallery-focussed: Manchester Museum is building a new South Asia Gallery in partnership with the British Museum. The British Museum will loan most of the objects for the gallery and, as the curatorial liaison for the project, I will be advising on object selection while working with colleagues in Manchester to develop a narrative. It’s a very exciting project, not least because it is a unique opportunity to work closely with the local community, including the Pakistani, Indian and Bangladeshi diaspora, and display the history of South Asia to a regional audience.

What is your favourite object in the collection and why?

This is such a difficult question to answer because the collections I curate include objects such as the Bimaran casket, Mathura lion capital, reliquaries from Sanchi and sculptures of the Buddha from Sarnath. Can I choose them all? I did say the museum’s collections were superb. If I had to choose just one, I would select a small, unassuming fragment of an inscription. It is, however, one of the most important objects in the entire collection from South Asia: an Ashokan pillar inscription from Meerut (later moved to Delhi) dating to the mid-third century BC.

Ashoka is one of the best-known Indian rulers and it was during his reign that the Mauryan Empire reached its greatest extent, and political and cultural peak. Ashoka was also the first to erect monumental inscriptions across the subcontinent. Our fragment is engraved with part of Pillar Edict VI, of which only six copies are known today. The portion preserved in the British Museum bears part of the last two lines of this edict written in Prakrit in the Brahmi script (the ancestor of most South and Southeast Asian scripts in use today).

When I see this object and know it is amongst the collections I curate, I sometimes have to pinch myself because it is such a privilege to look after something that is so important and linked to an extraordinary ruler. It is astonishing to think that we have a small part of this key moment in Indian history – I believe we are the only museum outside the subcontinent to have any part of an Ashokan inscription. It is displayed prominently in the Hotung Gallery, where millions of visitors from around the world, who freely enter the museum every year, can see it.