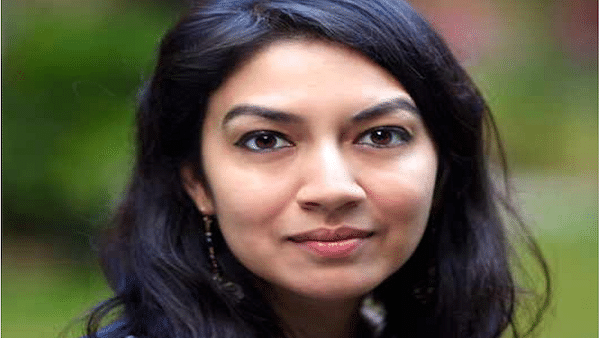 Reading The Bones Of Grace, Tahmima Anam’s third novel, one is immediately struck by the lyrical quality of her prose. The British-Bangladeshi writer weaves her story of love and longing, of breaking down and building anew, across continents and, indeed, across millennia. And while you may gasp at the overdose of feeling she conveys at times, the novel glides smoothly, evoking the East and the West and the schizophrenic life between the two that many South Asians lead.

The novel’s first person narrator is Zubaida Bashir, a Bangladeshi marine paleontologist who is doing her PhD at Harvard. Days before her departure to Pakistan, where she is to join a dig to excavate the bones of a prehistoric, amphibious whale, she meets Elijah Strong, a sometime PhD student, at a Shostakovitch concert. Their connection is immediate, electric— sparked not just by their common love for music, but by an ineffable empathy that knocks the breath out of her. She tells him that she was adopted, that she has no idea who her real parents are, and he seems to sense at once what that not knowing means to her.

Zubaida falls in love with Elijah, even though she is engaged to be married to the rich and handsome Rashid back home in Bangladesh.

At the dig in some remote, sun-blasted spot in Balochistan, the team of paleontologists finds the fossils of the whale, Ambulocetus. It is a staggering discovery. But before the work is complete, Zamzam, a member of the team, is arrested on the charge of terrorism. The dig is abandoned and the team buries the bones back where they had rested for 50 million years.

Zubaida returns to Dhaka, dejected, and continually haunted by the twin abandonment— of Zamzam who disappeared, and of the remains of the Ambulocetus pushed back into the darkness again.

Though she knows Rashid is not the man for her, she soon succumbs to the pressure of what is expected of her and marries him. She moves into his lavish house, and, as she had known all along, feels stifled by her all-you-could-wish-for life amidst the entitled Dhaka elite. She has a miscarriage, is overcome by a sudden, profound sense of loss, and from thence begins her long, slow trek to reclaim her past and build her present and future.

Anam, whose novels are rooted in the history of her native land— her first novel, A Golden Age, was set against the backdrop of the 1971 war— places The Bones of Grace against Bangladesh’s war criminals’ trials of 2012-14. However, the political and social convulsions over the trials and their verdicts are only hinted at. The narrative is centred around Zubaida’s journey of self-discovery, accentuated by two dominant metaphors for her quest: the fossils of the whale dinosaur (an amphibian which mirrors Zubaida’s embrace of the East and the West) that must be unearthed and put back together; and Grace, a resplendent, decommissioned, passenger vessel that lies on a ship-breaking beach in Chittagong.

Zubaida goes to Chittagong to be part of a project to film the lives of workers at a ship-breaking unit. As Grace is hacked to pieces to be sold off as scrap, her old life too disintegrates. Elijah travels to Chittagong to be with her for a brief while and her marriage to Rashid collapses. When fate propels her towards discovering her origins at last, Zubaida, always deeply conflicted about her choices, is finally able to choose without fear or cowardice.

There are several autobiographical elements in the novel, of course. Anam has a PhD in anthropology from Harvard and, like Zubaida’s parents, hers too were involved in the Bangladesh Liberation War. Though Anam has lived in the West most of her life, she paints members of Bangladesh’s privileged society with quick, deft strokes: Rashid and her sister Ruby with their Western education and vocabulary; their parents Dolly and Bulbul, who preside over their wealth with smug pride and are biting in their contempt for the “shit-poor”—the people from whom Zubaida was taken as a baby. Anam looks at the rich and also at the crushingly poor, bled dry by petty tricksters and big-time industrialists alike. In their midst are Zubaida’s parents— wealthy yet left-leaning, clinging to the shreds of the idealism that had turned them into freedom fighters in their youth.

The narrative falters at times, though— chiefly when Zubaida addresses herself to Elijah and alludes to past incidents and future occurrences that seem decidedly woolly. The tone of these love notes is also cloying. In fact, if Anam has one spectacular failure in this book, it is the character of Elijah. He is poorly realised, almost always insubstantial and shimmering in the distance, an idea of perfection in Zubaida’s mind rather than a man of flesh and blood.

The Bones of Grace is a deeply felt work. There are times when Anam lets the feeling of love and longing drown the narrative. But there is a sanctity to Zubaida’s quest, a sharpness to her observations about life in Bangladesh, that override her protagonist’s self-indulgent protestations to Elijah. And that redeems the novel.