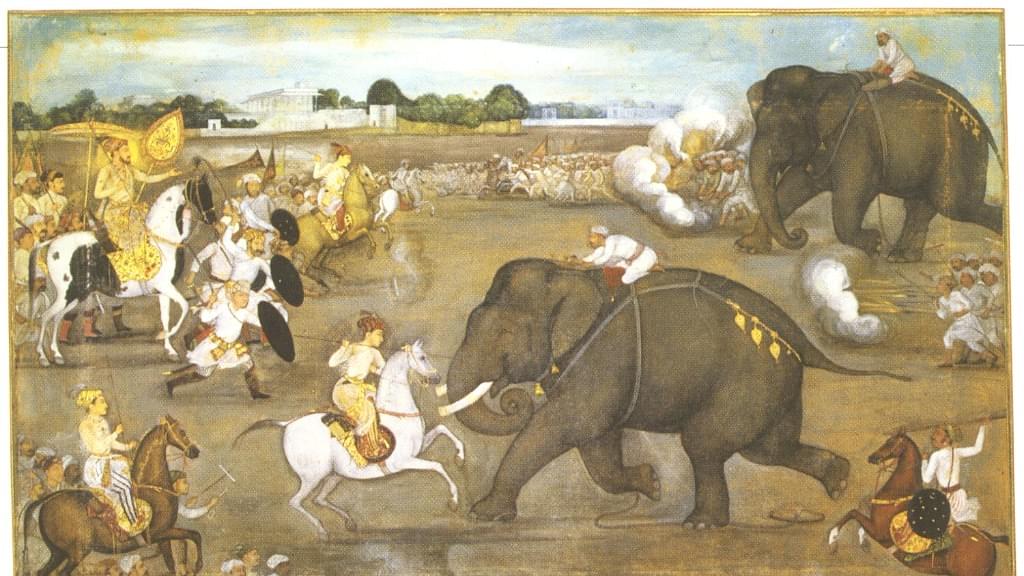 From the subjugation of Makran in 643 to the third battle of Panipat in 1761, why couldn’t we come up with an effective answer to such repeated Islamic invasions?

In my last column, I chronicled, nay, lamented the destruction of Nalanda. The wanton demolition of great temples of learning and the decimation of their inhabitants, deplorable and outrageous as they were, are not the only things that gall. It is the deliberate and insolent devastation of this great seat of ancient education that is so saddening. No doubt, information, teaching and research in a variety of disciplines including mathematics, philosophy, linguistics and natural sciences were set back by centuries. The mass execution of so many learned professors, scholars, monks and students resulted in a huge knowledge deficit and pedagogical vacuum.

Much of the old Hindu India was similarly laid waste, with so much vandalism, destruction, and killing that it shames the pages of history. The fact that the region was re-christened “Bihar Sharif”, with many other temples demolished or converted into mosques, attests to this continued conquest and conversion. Among these newer shrines of the conquerors superimposed upon already sacred and ancient sites is the dargah of Sheikh Sharfuddin Yahya Maneri, which gives the place its name, reputedly situated on the ruins of the ancient Odantapuri. The tomb of Syed Ibrahim Mallick, not too far away, was remade from a temple constructed by King Gopala.

These facts, however well-hidden or massaged by our “secularist” rulers and their well-rewarded historians, keep staring us in the face wherever we care to dig just a bit below the surface. However much we may live in denial, the terrifying and colossal devastation that our civilisation suffered is incontrovertible. If there is an unhappy and distressing truth that historians the world over have withheld from us, it is this: the classical world was destroyed by Christian and Islamist armies both in the West and in the East. Egypt, Greece, Rome, and later South America, were laid waste, the last with shocking cruelty and devastation, by the vice-regents of god on earth, which is what the Roman Catholic Church still considers itself to be. Constantinople, the second Rome and the heart of Eastern Roman Empire, Anatolia, Persia, Central Asia, and Hindu-Buddhist India — all were wrecked, wasted and shattered by Muslim warriors.

Europe was just barely saved. The Iberian Christians beat back the so-called Moors and fully reconquered their peninsula in 1492. On the South-Eastern borders, the Polish King Jan III Sobieski led a Christian coalition against the Ottomans in 1683, lifting the siege of Vienna. By the end of the seventeenth century, much of Hungary had been recovered from the Ottomans. This was the turning point in the 300-year war between the Habsburgs and the Ottomans. Of course, even earlier, from 1095 to 1410, the Christians and Muslims bitterly fought during the Roman Catholic Church-sponsored crusades.

The United States, which had no direct experience of Islamist jihadism, awoke to its shocking horrors on 9/11/2001, when Osama bin Laden’s holy warriors crashed fuel-laden jetliners into iconic American skyscrapers, turning transportation devices into passenger-carrying missiles. After years of confusion and denial, the true extent of this new threat to the world order has now been acknowledged by most. Except, of course, the jihadists themselves and their feeble-minded or sold-out left-liberal supporters the world over. Ironically, it would seem that the ideological and theological descendants of those who ruined the ancient world now wish to bring down the modern world too.

Won’t a thinking person, examining the evidence and joining the dots, be able to draw a line connecting the assault on Nalanda and the twin towers of the World Trade Center? Won’t she see both attacks as being underwritten and justified by a similar religious mentality?

A New History of India

Turning back to India, when we review our mediaeval history, we find king after king, kingdom after kingdom destroyed by Islamic invaders. This repetitive saga of pillage, destruction, death, slavery, rape, loot, vandalism and destruction, we must admit, does have some notable, even spectacular, exceptions. There are, besides, many new cultural, social and spiritual formations on the ground where the two communities, the converted and the unconverted, learn to live side by side, under the hegemonic, often despotic, rule of invaders and conquerors.

An accurate history of India, sympathetic to the conquered and converted, is yet to be written. But that doesn’t stop us from wondering what the scholars, teachers, intellectuals — not just the kings, courtiers and soldiers — were doing during this millennium. From the subjugation of Makran in 643 during the last years of Umar’s Caliphate to the third battle of Panipat in 1761, in which the Marathas lost to Ahmad Shah Abdali, why didn’t we come up with an effective answer to such repeated and devastating assaults? Over a thousand years of defeat without a successful answer? In case this sounds terribly self-castigating, I can only add that it might have been worse. The other way of looking at that period is as a thousand years of resistance to total defeat, annihilation, or assimilation, as was the fate of many other countries and cultures seized, occupied and destroyed by Islamic armies.

In my last column, I proposed that we must admit that we failed. We must not be in denial or try to mitigate the impact of these conquests. We must not try to seek revenge in present times either. Instead, we must recognise that our failure was as much intellectual and strategic, as it was economic or political failure. No real renaissance is possible without understanding, coming to terms with, and learning from the breakdown of the ancient Indian civilisation or the desolation that we suffered during those centuries.

A simple answer, one that best fits all the facts, stares us in the face. Indian civilisation was unable to counter challenges outside the framework that it had proposed and mastered during its classical, some might call golden, age. Once this framework itself was shattered by an attack that used a totally different configuration based on a totally different idea of religious warfare, India was unable to resist it. We lacked cohesion or the adaptive competence to deal with this challenge. We were unable to exploit the cracks and confusions in the enemy’s systems or structures against them. Simply speaking, we did not have the civilisational counter that effectively negated the invaders’ strengths.

What to Make of Pax Britannica?

The Indian or, to put it a little more bluntly, Hindu re-conquest of India, mainly by the Sikhs and Marathas, was interrupted by another imperial and colonising power, Britain, which, by the first quarter of the nineteenth century, established its absolute mastery over the sub-continent. But, of course, Pax Britannica, at least its peace, was a hoax. There were revolts and uprisings in some part of the empire or other throughout British rule.

But our rulers were crushingly interested in making money from their colonies. Or to put it in slightly more technical-sounding economics terminology, in extracting the surpluses from India. Political power and military might were mere props that scaffolded the terribly violent and exploitative edifice of the Raj. To this end, the British succeeded in recruiting Indians of various varieties and ethnicities into their armies and police. They hired Indian bureaucrats, servants and spies. Dissent was ground into the dust with an iron heel. Several native princes, landlords and members of the educated classes were also co-opted into the imperial scheme. An effective and elaborate system of blandishments and punishments was put in place to ensure the more-or-less smooth functioning of the imperial, extractive engine.

From early on, Indians were fed up with the rule of the East India Company, but the Revolt of 1857 failed. India was, instead, absorbed into the empire, no longer ruled by proxy by the East India Company, but directly by Queen Victoria herself. The latter, triumphantly, proceeded to crown herself as the Empress of India on 1 May 1876. Right into the early 20th century, absurdly lavish and brutally wasteful imperial and coronation durbars celebrated the magnificent power of our distant monarchs.

The British were, in some ways, worse than their predecessors. They bled and nearly starved us. But we owe them in one respect. It is they who, in large measure, gave us back our pre-Islamic past. Without access and recourse to that ancient record of what noted historian A L Basham called “the wonder that was India” in his eponymous book, the project of modern India would never have taken off. I have demonstrated this thesis at length in my book Making India (Springer 2013; Amaryllis, 2015) and elsewhere.

Indians, mostly upper-caste Hindus, took to Western education. They worked out another way to resist the empire, a modern, constitutional way, which had the conditional sanction of their rulers. It was mostly a species of contained, if not controlled, dissent. But it gave a beleaguered people some respite to work out who they were, what went wrong in the past, what their future might be.

The Rediscovery of Nalanda

When it comes to Nalanda too, it is our British colonial masters who ordered a thorough investigation and excavation. Indeed, what is perhaps little known is that the rediscovery of Nalanda is quite recent, dating back only to 1915. Prior to that, as photographic evidence shows, the place was only a mound of rubble. Though Alexander Cunningham, the founder of the Archaeological Survey of India (ASI), surveyed the area as early as 1861–1862, no one quite knew what lay underneath.

The first excavations from 1915 to 1937, supplemented by those in 1974-82, revealed six major brick temples to the west and 11 monasteries to the east, spread across some 30 acres, with a 100-feet road running between them. According to the ASI, the original plan of the Mahavihara at its height would have exceeding 250 acres, with each monastery consisting of a central courtyard, rows of cells around it, secret chambers for valuables, kitchens, granaries, and common meeting and prayer areas.

This ancient university, far older than Oxford or Cairo, attracted students and scholars from many countries, including Korea, Japan, China, Tibet, Indonesia, Persia and Turkey. Some of the greatest acharyas of Mahayana Buddhism, including Nagarjuna, Aryadeva, Atisha, Chandrakirti, Dharmakirti, Dharmapal, Dignaga, Naropa, Santaraksita, Shilabhadra and Yijing, the Chinese Buddhist traveller, are associated with Nalanda. Indeed, the Dalai Lama himself considers Nalanda Buddhism the tradition he espouses.

Lessons for the Future

When confronted with these bitter facts about their past, many Hindus become angry, perhaps justifiably so. But against whom do we direct our anger?

What we must remember is that most Muslims in the sub-continent are themselves victims of this outrage, former Hindus and Buddhists, who were compelled or induced to convert, to accept the conquerors’ faith to escape death or terrible oppression. These sub-continental Muslims have themselves been in denial, some of them taking the disingenuous line that all that is in the past, now give us own constitutional rights and more as minorities. But in recounting these histories, it is hoped that these Muslims seriously consider publicly disowning the brutal record of the Islamic conquest of India and disaffiliating themselves from its triumphal depictions. Wouldn’t that be the prerequisite for better Hindu-Muslim relations in the future?