Differently-Abled People Remind Us Of The Value Of Compassion 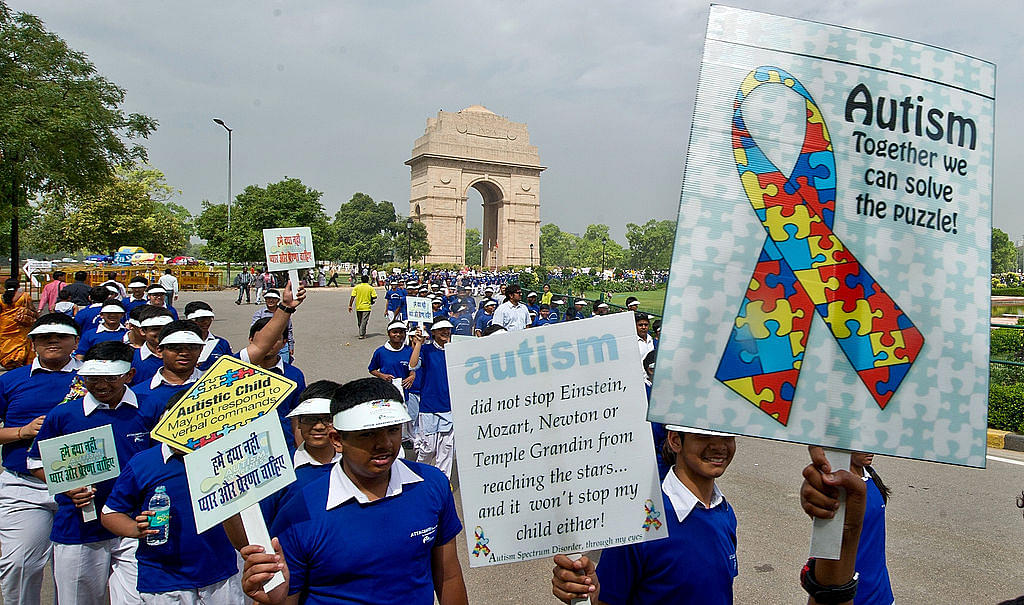 School children carry placards as they participate in the Autism Awareness Walk 2013.

Naoki Higashida is profoundly autistic. He is largely non-verbal and he has typical autistic traits – he jumps, he has meltdowns and finds it difficult to make eye contact. He is also the most translated Japanese author after Haruki Murakami.

His first book, The Reason I Jump was one of the most widely read books by parents with children on the autism spectrum. The book helped break many myths about autism and provided pathbreaking insights into the human brain. For instance, the inability to make friends is not because they don’t want to, but because they worry about the sort of impression they are going to make. However, nature is their best friend because autistic people, like nature, are non-judgemental.

In his latest book, Fall Down 7 Times, Get Down 8, one of Higashida’s most striking ideas is that there is a reason why people with autism and other special needs exist. “I can’t help but feel that some imbalance in the world first caused neuro-atypical people to be needed and then brought us into being,” he writes. “Those who are determined to live with us and not give up on us are deeply compassionate people, and this kind of compassion must be a key to humanity’s long-term survival.” This ability of special needs people to fundamentally raise human consciousness through compassion, is what I believe is the real impact of people with disabilities.

Ranked a great virtue in numerous philosophies, compassion is considered in almost all the major religious traditions as among the greatest of virtues. The word “compassion” has often been wrongly defined as “pity for someone else” (sympathetic pity and concern for the sufferings or misfortunes of others). The real definition of compassion is the response to the suffering of others that motivates a desire to help them. It is a combination of empathy and suffering (compassion is thus related in origin, form and meaning to the English noun “patient” – the one who suffers).

There are other positive aspects of people with disabilities. My friend, Thorkil Sonne, and Professor Rob Austin, in their landmark Harvard Business Review article, “The Case for Hiring Outlier Employees”, states that the perspectives provided by autistic people can be very important to innovation-based businesses. Another insight is that if we can design solutions for the outliers, then it would work for everyone else. For example, subtitles were first introduced so that hearing-impaired people can read the text; this is now used by everyone, even those who know the language, so that they don’t miss any information lost due to delay in understanding specific accents or dialects used in the dialogue/narration!

While there is a compelling case being made for outliers being good for innovation, they are even better to increase the human consciousness. At a time when artificial intelligence (AI) seems to have captured the imagination of humankind, the more difficult question is about the understanding of artificial consciousness or machine consciousness. The debate has been split between the sceptics and the theorists. The sceptics hold the view that consciousness can only be realised in physical systems because consciousness has properties that necessarily depend on physical constitution. For theorists, who define mental states in terms of causal roles, any system that can instantiate the same pattern of causal roles, regardless of physical constitution, will instantiate the same mental states, including consciousness.

Human consciousness is difficult to understand and even more difficult to clone. The only finality is that this debate will go on for a very long time and that the core identity of a human being will remain human. The day when machines can empathise, it would be the end of humankind.

People with autism and other disabilities may seem like an aberration but they invite us to a place of greater empathy, compassion and humanness. They help us see the world with a different lens. When the world is becoming more and more connected and less and less human, this seemingly disconnected group of people makes us more and more human.

Author Yuval Harari in his book, Homo Deus, talks about a need for a catastrophe or a natural calamity for humans to come together. Outliers, like the people with disability, are a reminder for humans to become more human. If everyone looked the same and did the same things, humans would not have made progress and hence the need to embrace people with disabilities in our society. Berkeley Professor John Danner once mentioned to me, “inclusion will be the next big revolution, and it will be our biggest failure if we did not recognise it.”

Unfortunately, the language we use when we deal with people with disabilities is that of deficit. If we keep saying that people with disabilities have a problem, it becomes a problem. The need of the hour is to change that narrative. We need to realise that being typical is not the holy grail. We need diversity and in many instances, we are heading towards a better world because of diversity in people.

In my own personal journey of raising a child with autism, I have had a fast track in enlightenment. Through my son, I have got a front row seat in the evolution of the species. I have started to see that my son is the solution to all the problems and that he is not the problem. I wish to live to see a day when an announcement/diagnosis of the news of a differently abled person is not seen as a death sentence but accepted with equanimity!

One of the most challenging tasks in the inclusion space is bringing a change in mindsets. I have been often asked, how can you prove that you have been successful in changing mindsets? My answer is, “the mindset I wish to change is my own”. This reminds me of Amos Tversky’s famous quote, “it is sometimes easier to make the world a better place than to prove you have made the world a better place”.

In my inclusion journey, I have attempted to move from sympathy to empathy to compassion. The journey to compassion needs deeper inner transformation and a lot of patience and perseverance. As my friend and founder of Service Space, Nipun Mehta, tells me, “there is no exit strategy. You just need to keep going – with compassion!”