For These Indian Muslims, Celebrating Hindu Festivals Resulted In Boycott From Their Own Community 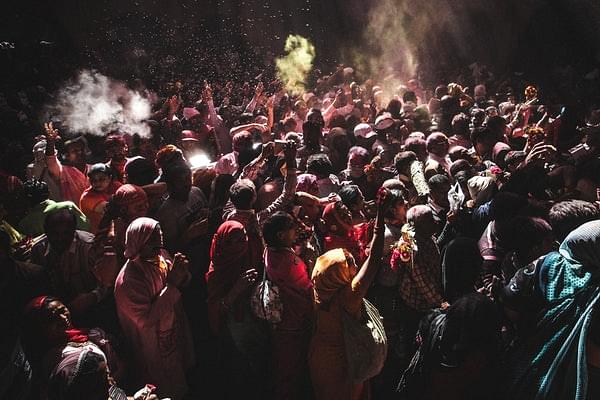 It’s troubling to think that celebrating local festivals can be seen as taboo.

Muntazar, a resident of Bihar's Begusarai district, came home dipped in colour from head to toe. His joy, however, proved to be short-lived as his furious wife declared she had had enough of her husband's "anti-Islamic" ways and returned to her maiden house.

Another Holi has just passed, but his wife continues to live separately. Twenty-eight-year old Muntazar, who married in 2017, told Swarajya that she has put a condition that he must give in writing that he would "behave as a Muslim" in the future. Muntazar has refused to do so, and his wife has demanded a khula (a form of divorce initiated by the wife in the Islamic law but subject to husband's approval).

The couple's case is being heard in a Darul-Qaza (a Sharia court) and a verdict is expected soon.

Muntazar shared with this correspondent a few pictures of him playing Holi that put his marriage in jeopardy. When asked if publishing the pictures could run him into trouble with the clerics, Muntazar replied, "Go ahead and publish. Let's see what they can do. This is India, not Pakistan."

In the adjoining state of Uttar Pradesh, Babu Khan wasn't spared the ire of the clerics, who resorted to downright violence. A resident of Baghpat district in western UP, Khan was thrashed at the gate of the local mosque for taking out a Kanwar yatra. He was told he should go to a temple instead.

Stories like Muntazar's and Khan's are seldom cited as challenges to communal harmony and multiculturalism.

Dissenting voices within the Muslim community say that instead, a perverted narrative around communal harmony is being pushed which suggests that the community must be 'protected' from Hindu festivities, like the case in a recent detergent powder commercial.

They say that such a flawed narrative not only leads to the othering of the community but also severing of Muslims' ties with their "roots".

Khaja Shah (surname changed to protect identity), who hails from a village in Andhra Pradesh, told Swarajya that he objects to the idea that celebrating a Hindu festival is 'haram' (forbidden) for Muslims — an idea that the said commercial seems to agree with.

Shah, who lives in Hyderabad, said that the discourse within the community peddled openly in the mosques is fanatically anti-Hindu and anti-Hindu festivals. "We are told that a real Muslim wouldn't wish a Hindu on Holi and Diwali for it means an acknowledgement of the Hindus' deity as a legitimate god. Likewise, splashing colours on Holi and lighting diyas on Diwali are declared to be 'haram' for Muslims," he said.

A reality across India, however, is that a large number of Muslims willingly celebrate Hindu festivals. They do so not only as a gesture of social courtesy extended to their Hindu brethren but also on their own volition, sometimes as an open acknowledgement of their Hindu ancestry.

Shah, for instance, said that most Muslims in his village continue to keep their Hindu surnames, worship the local Hindu deity, and observe all the major Hindu festivals.

Ali Muntazar shared his ordeal of how his in-laws and a section of the Muslim community dragged him over the coals for his zeal towards all things Hindu.

"They have been scaring me with dire consequences that they say are described in the Quran. They call me kafir and have created suspicion around me. A section of the community has labelled me as an RSS agent," he said.

"Whenever I have tried to debate on this logically, they have dismissed me as anti-Islam. You see, the label of anti-Islam is a strong tool for shouting down voices like mine and turn the community against us."

Muntazar told Swarajya that he is quite clear about his identity as an Indian Muslim rather than an Arab-Muslim. "I am son of the soil. I have nothing to do with the Arabs or their culture," he said.

Muntazar said the ongoing episode around his marriage has exposed him to several kinds of ideological hypocrites. He said that when he first began to question the Islamic religious text and tenets and attempted to debate with the clerics, he was never offered convincing answers.

"I would ask them why is it that in practice, Islam has never treated women well, be it invaders taking in women as sex slaves or the continuing rules regarding unilateral divorce. They would admit in person that they have no answers to my questions, but in public, they would advocate to women that Islam is best for them," said Muntazar, who hails from a family of clerics.

He said he married into a family with open communist leanings but, much to his shock, his in-laws are "hardcore Islamists".

"I thought communists must be non-religious or at least liberals. On my part, I made it clear to my wife before marriage that I am not much religious. But they turned out to be hardcore Islamists. They advocate burqa, pressure me to fast during Ramzan and prohibit me from keeping my feet towards the West," he said. "They have proven to be far less tolerant than my own family that even though disagrees with me on discussions around Islam, respects my choices and let me live my life my way."

Shubham Bhardwaj, a 23-year-old Bajrang Dal activist in Begusarai, told Swarajya that such harassment of dissenting Muslims is not uncommon in the area.

It was Bhardwaj, who is co-convener of the outfit in north Bihar, who helped Mohammad Anwar, also a Begusarai resident, to officially enter the Hindu fold after he faced harassment through social boycott by the clerics and the community two years ago. Anwar, who has changed his name to Anand Bharti, told Swarajya that he hails from a "model village" called Parora in Begusarai, where Muslims observe Diwali as a festival of cleanliness and Holi as a festival of colours.

But outside of the village, he was harassed by the clerics who told him he is committing gunah (sin). Constantly under the needle of suspicion, pressure on him increased, and he began to be told to send his children to madrassas instead of modern educational institutes. Eventually, Anwar decided to stand up against the bullying.

"Humne kaha, tum apna dharm samet kar apne paas rakho. Hum kattar nahi they aur na honge [Keep your religion to yourself. I was never an extremist and will never be one]," he told Swarajya about his decision on 'ghar wapsi'.

Scratch the surface a bit, and stories of Anwars and Muntazars of India reveal themselves. They tell us that communities would live in much greater harmony if involved in celebration of the local culture instead of being 'protected'.