Should India Be Ready To Reap Military Potential Of AI, It Can Redefine Warfare As We Know It 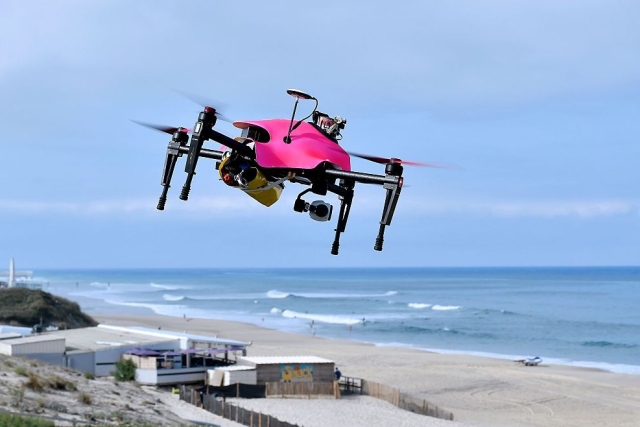 A surveillance drone flies over the beach of Biscarrosse, during a demonstration of a rescue operation. Photo credit: GEORGES GOBET/AFP/GettyImages

That artificial Intelligence (AI) is going to be central to economic and military power in the coming decades is by now a well-worn cliche. All major powers have jumped on the AI bandwagon in one way or another. In 2017, when Russian President Vladimir Putin stated that the nation that becomes the predominant leader in AI ‘will be the ruler of the world’, he only brought to public attention what was already being acknowledged in capitals across the world. Governments are beginning to see AI as a transformative technology that could enhance their military and economic capabilities, creating what has been called in popular media as an ‘AI arms race’.

An arms race, however, does not yet exist in this space, but what cannot be doubted is the increasing strategic competition among the major global powers, and especially between the two biggest players in this field, the United States and China. While this competition cuts across all domains, it is the military component that has got the most attention, and could possibly prove to be the most destabilising. Given the nature of the technology, AI could provide a technological edge to the militaries that manage to incorporate it faster than their rivals. The use of AI for frontline combat purposes could also exponentially increase the speed of warfare, while triggering a cascading set of questions on proportional responses, established escalation doctrines, and even nuclear posturing.

As the current technological leader in this field, the US was the first country to explore the implications of AI for its military. The US Department of Defense (DoD), for instance, released its directive on autonomy in weapon systems in 2012, before weapons autonomy became a major topic of international discussion. This was followed up by service-specific measures such as the establishment of the Low-Cost UAV Swarming Technology programme by the Office of Naval Research in 2015; the creation of the Defense Innovation Unit Experimental, which aims to help start-ups in this space work closely with the US defence forces; and the establishment of the Defense Innovation Board as a platform to bring together private technology companies and the US military to take advantage of emerging technologies. In 2017, the US DoD also rolled out Project Maven, in what could be amongst the first battlefield applications of AI, which is intended to analyse drone footage to provide actionable intelligence.

Other countries are closely following the US’ footsteps, but none more so than China. The Chinese government has identified AI as the fundamental technology of this century which will exponentially drive Chinese growth. Indicative of its ambitions, China put out the ‘Next Generational Artificial Intelligence Development Plan’ in July 2017, where it clearly outlined its aim to become the global leader in AI technologies by 2030. A central component of Chinese AI plans is the idea of ‘civil-military integration’, wherein advances in the civilian AI sector can and will be used to advance Chinese military interests.

China has already begun making rapid strides in this field. Chinese tech companies are at the forefront of cutting-edge AI advances, and Chinese universities are now amongst the most cited in AI research papers across the world. These investments are starting to have on-ground impact, with China now exporting its unmanned aerial vehicles (UAVs) to a number of countries, as a direct competitor to the US, and unveiling several cutting-edge autonomous aerial and naval projects. Recent reports also seem to indicate that China is interested in exploring the potential use of AI to augment its command and control systems, and has begun research on using AI in nuclear submarines to aid the decision-making capabilities of its commanders.

Given these global developments, India too has begun exploring the possible benefits of AI for its defence forces. There are several uses of AI technologies that can be of direct benefit for the Indian military including intelligence, surveillance, and reconnaissance (ISR) activities, border and harbour patrol, battlefield data analysis, command and control systems, and logistics. Another possible use, but one that could prove to be quite controversial, is the use of Lethal Autonomous Weapon Systems (LAWS), which the US Department of Defense defines as a weapon system that can select and engage targets without further human intervention. LAWS could theoretically be of immense benefit to the Indian armed forces, especially in harsh border terrains, where they could reduce soldier casualties. However, the development and use of LAWS has the potential to fall foul of international humanitarian law.

Therefore, whether LAWS should be developed, and if so, under what kind of regulations, is a global debate, with the United Nations constituting a group of governmental experts (GGE) under the aegis of the Convention on Certain Conventional Weapons (CCCW) to discuss this very issue.

Even if LAWS are discounted as a potential application for the time being, the remaining applications listed above, could within themselves provide immense benefit to the Indian military and help it retain a technological edge vis-a-vis Pakistan and possibly counter the technological surge of the Chinese military. India has begun taking definitive steps in harnessing the potential of AI for its military. The Ministry of Defence has established a taskforce (of which I am a member) to study how to encourage greater incorporation of AI in the functioning of the Indian armed forces. The ministry has also recently established a platform to encourage greater participation of start-ups in the defence industry, called Innovation for Defence Excellence (IDEX). Each of the three services have also expressed significant interest in incorporating various forms of AI across a variety of domains, and Defence Minister Nirmala Sitharaman herself has stressed on the need to focus on AI, and other emerging technology, to make the Indian military ready for the battles of the future.

While these developments are very welcome, the fact remains that India lags significantly behind not only the US, but also China, in the AI space. Barring a few honourable exceptions, the vast majority of Indian universities and research departments do not hold a candle to the level of technical and fundamental research being conducted in either of these countries. Neither does India have a domestic equivalent of a Google, Amazon, Alibaba, or Baidu that can invest the resources and manpower necessary to drive cutting- edge developments in the space. What India does have, however, is a vast talent pool, both within the country and outside, and a burgeoning start-up scene which, if properly tapped and encouraged, could not only provide indigenous military solutions, but could also create significant domestic expertise, which could then be exported, thereby unlocking immense economic value.

For this to happen effectively, however, new processes of defence acquisition would need to be developed, as the current models are not conducive to the flexibility required to encourage rapid development and acquisition of AI technologies. While AI is in many ways the flavour of the season, it is necessary to highlight the fact that it is only one of several emerging technologies, including quantum computing and gene-editing, that could potentially reshape warfare as we know it. How India chooses to engage with the military potential of AI will indicate how India will approach other evolving technologies and, therefore, how ready India will be for the new age of war.