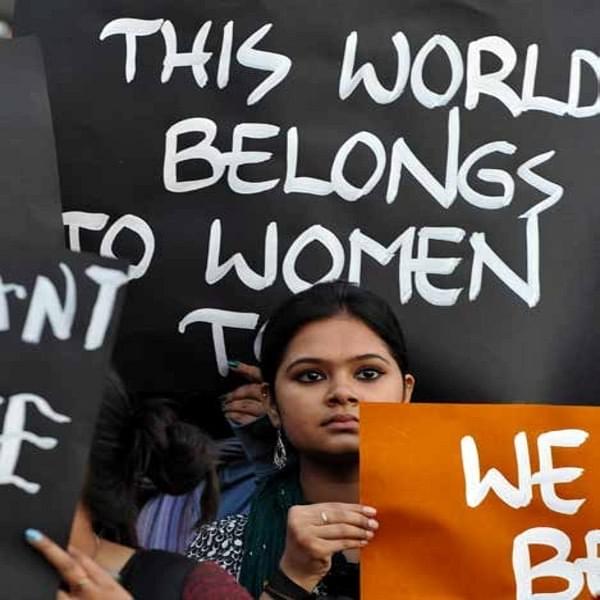 To end gender-based violence, we have to take action at three distinct levels: individual, familial, and State.

Well, first things first… “Let’s Orange the World” is not a covert attempt at saffronisation of the world by the “Hindu Taliban”. I am sure Mr Anish Kapoor can now relax in his plush sculpting studio before he puts pen to paper and writes another provocative piece for The Guardian, this time accusing the United Nations of getting in bed with the Indian Prime Minister. (Sorry Mr Kapoor, I wasn’t planning on making it personal but when you unfairly dub all my fellow countrymen “fascist”…well, you’re kinda making it personal.)

Anyway, moving on… Let’s “Orange the World in 16 Days” is actually a United Nations initiative for the Elimination of Violence against Women. Every year, beginning November 25th (International Day for the Elimination of Violence against Women) through the run-up to Human Rights Day on 10th December, the world celebrates 16 days of activism against gender-based violence. And no, you do not have to be either a female or a feminist to be a part of this movement. (Being human, but, is a prerequisite.)

While it has been argued by many that violence in general and violence against women in particular cannot be prevented let alone be eliminated, it simply does not give us the license to play ostrich with our heads perpetually stuck in the sand. The truth is, affirmative action can go a long way in preventing and eliminating systemic violence against women. It has worked in the past and I am pretty sure it can work in the present. All we really need is collective intent.

However, before we move forward, let us first understand the term “Violence Against Women” (VAW). According to the United Nations, it encompasses “any act of gender-based violence that results in, or is likely to result in, physical, sexual or mental harm or suffering to women, including threats of such acts, coercion or arbitrary deprivation of liberty, whether occurring in public or in private life”. In other words, gender-based violence includes all forms of violence that are perpetrated by (a) either a man or a woman and/ or (b) an individual or a State—directed towards another woman simply because she is a woman. (Yes, women too are capable of participating in gender-based violence—a strange and curious phenomenon, which we will probably discuss another time, in another article.)

Hence, violence against women is an umbrella term for all crimes against women/girls that are a resultant by-product of a patriarchal, patrilineal, patrimonial, and patrilocal society like India. Hence, they are not just perpetrated by individuals alone, but by States too. When it comes to individuals, violence against women gets manifested in the form of eve-teasing, stalking, rape, domestic violence, sexual harassment, sexual abuse, acid attacks, coercive use of contraceptives, female foeticide or prenatal sex selection, female infanticide, obstetric violence, mob violence, witch lynching, honour killings, dowry deaths, female genital mutilation, marriage by abduction, and forced marriage. Other forms of violence that are often perpetrated by the State (and often with impunity) include: war rape, forced sterilisation, forced abortion, stoning, and flogging. While organized crime syndicates perpetrate violence on women through human trafficking rings and prostitution networks. Phew!

As you can guess from the violence bucket list as enumerated above, if you are a woman, you have much to be worried about. In fact, according to Major-General Patrick Cammaert, former commander of the UN Peacekeeping Forces in the eastern Congo, “it has probably become more dangerous to be a woman than a soldier in armed conflict.” Now that is saying something.

This is also why the Indian government has been shying away from allowing women officers to serve in active combat duty during times of war. And while the government has finally given its nod for female officers to fly fighter jets (“partially” paving the way for women to assume combat roles), it will be a long time before they are allowed to march on foot into enemy territory.

If you think the government is wrong, here’s a sobering statistic. In 2012, a study conducted by the United Nations in Delhi found that 92 per cent of the women surveyed reported having experienced some form of sexual violence in public spaces in their lifetime. Similarly, according to Amnesty International figures, around the world, at least one woman in every three has been beaten, coerced into sex, or otherwise abused in her lifetime. Truth is, with gender-based violence at an all-time high, affirmative action is the only answer moving forward.

When it comes to combating gender-based violence, there are two basic facets that need our attention. The first is identifying and accepting that violence against women is simply a symptom of a much larger problem of patriarchy, which manifests itself through a dysfunctional discrimination against daughters. From the moment a woman is born to the moment she dies, she is forever treated differently from her male counterparts. The second aspect entails the action that needs to be taken in order to deal with this violence, which basically needs to work at three distinct levels: individual, familial, and State.

As for a man, it simply means making a single promise. A promise that he would never abuse the women in his life, nor let anyone else do so. When men stop being a part of the problem and start becoming a part of the solution, change is imminent. We already see this change at large as more men are stepping up to become equal partners at home.

Let’s be honest—gender socialization happens at home. From the moment a child is born, socialization lessons commence with a society-approved gender curriculum taught by zealous parents who indoctrinate their children on how to think and act based on their respective genders. Boys are actively discouraged from playing with dolls and openly encouraged to play with toys that mimic aggression and violence; while girls are provided with tea sets and dolls, so they can play “house”.

Hence, in order to prevent gender-based violence from becoming a problem of pandemic proportions, families must step up to stop gender socialization. As the most influential agents of gender socialization, it is the parent’s responsibility to stop differentiating between children based on their biology.

But most importantly, remember to undertake this simple job: “The day you talk to your daughters about safety, talk to your sons about consent.”

There is no denying that when it comes to our society, there is an overarching ideology that emphasizes male superiority vis-a-vis female dispensability. Society, through its strict adherence to gender stereotypes, provides its tacit approval to gender-based violence. The State therefore often has to step up and step in, in order to correct this anomaly. Even Article 4-c of the Declaration on the Elimination of Violence against Women instructs the State to “exercise due diligence to prevent, investigate and, in accordance with national legislation, punish acts of violence against women, whether those acts are perpetrated by the State or by private persons”.

One such example of a successful State intervention was Lord William Bentinck’s Anti Sati legislation of 1829, which declared abetment to sati as “culpable homicide”; even though there were many voices of dissent and cynicism back then that advised Bentinck against such legislation. One such cynical voice was that of Wilson Horace, a British Orientalist and secretary of the Asiatic Society of Bengal, who believed that any success of such legislation could at most be partial. But Bentinck had already made up his mind. A cursory perusal of his letter dated 8th November, 1829, reveals that Bentinck believed that if he remained silent on the issue of sati, he himself would be guilty of multiplied murder. After all, to quote Nicholas Cage, “If there’s something wrong, those who have the ability to take action have the responsibility to take action.” And so believed Lord Bentinck. Despite the ban being challenged by Hindu orthodoxy, the Privy Council upheld the ban in 1832 and the blot on our civilisation called sati became a thing of the past.

As the world embraces the colour “orange” and stands in solidarity against gender-based violence, let us be thankful that for every Wilson Horace of the world who thinks it cannot be done, there can be a William Bentinck who gets it done.