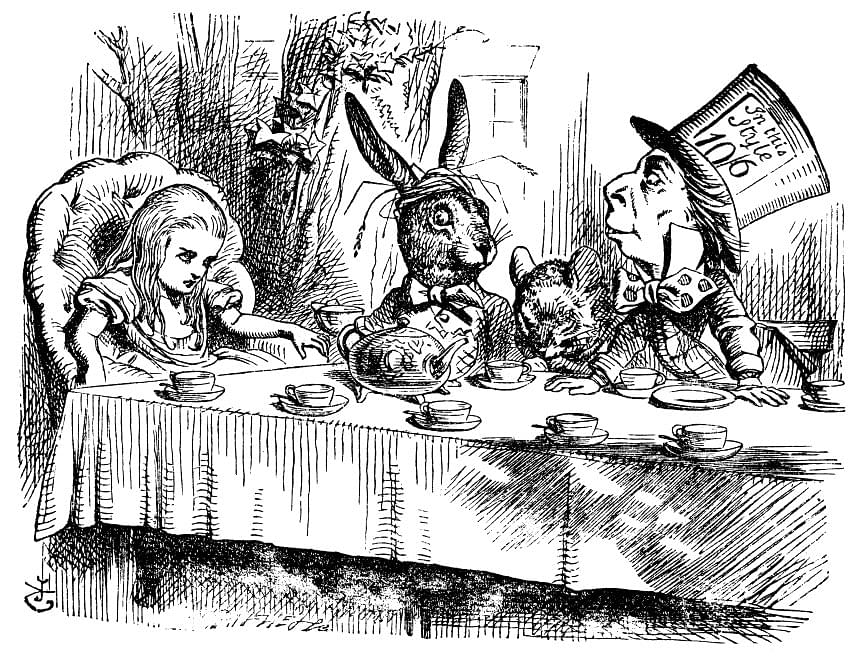 Alice in Wonderland turns 150 this year. You have to be living in a rabbit hole to think it’s a book meant only for children

On July 4, 1862, Charles Lutwidge Dodgson (who wrote under the pen name of Lewis Carroll) took a boat ride from Oxford to the nearby town of Godstow to have tea there on the riverbank. He was accompanied by his friend Reverend Robinson Duckworth and the three young daughters of another friend Henry Liddell: Lorina Charlotte (13), Alice Pleasance (10) and Edith Mary (8).

To entertain them, Carroll (1832-1898) made up the story of (fictional) Alice’s fall down a rabbit hole into Wonderland and her fantastic adventures there. He later wrote it down, on (real) Alice’s request, presenting it to her in November 1864 as a ‘Christmas Gift to a Dear Child in Memory of a Summer’s Day’.

By November 1865, the first edition of Alice’s Adventures in Wonderland was out, illustrated by John Tenniel, the political cartoonist of Punch. A hundred and fifty years and counting, it’s never been out of print.

Who Lewis Carroll was (really)?

Carroll was a mathematician and sub-librarian at Christ Church College, Oxford, a tall, lanky bachelor who spoke with a stutter and easily made friends with children. Apart from the Alice books (Alice in Wonderland and its sequel Through The Looking-Glass and What Alice Found There) which were a publishing sensation, he wrote a number of titles on linear equations, geometry and trigonometry.

The apparent “nonsense” of the Alice books have been analyzed threadbare, from being satires on Victorian social norms to caricatures of Oxford dons, from being a dark Freudian descent into the unconscious to an expression of Carroll’s discomfort with (then) newfangled notions of symbolic algebra.

Who Lewis Carroll was (accused of being)

Oh yes, Carroll, like many of his Victorian contemporaries, was also interested in photography. He photographed little girls (Alice Liddell among them), including nude portraits. His love for the nubile female child meant, of course, he was just waiting to be retrofitted by modern feminists into the paedophile straitjacket.

His letters (he mentions at one place: “I am fond of children (except boys)”) did not help his case either. The final word has spared him the shame though: nude photographs of children were apparently a widespread trend in Victorian society as depictions of innocence, and the fact that there is no record of an accusing finger ever raised at him.

Was Carroll on drugs though, and was Alice actually “tripping” in Wonderland? Are the hookah-smoking Caterpillar and size-altering mushroom pointers to mind-altering substance abuse, as the psychedelic 1960s would have us believe? The answer, again, is negative, in spite of opium, cocaine and laudanum being legit and widely in use in Carroll’s time. The embedded mathematical and linguistic puzzles and the internal logic of the book are believed to be too coherent for someone “high”.

What the Alice books have meant to the creative

More than anyone else, artists have had a field day illustrating this riotous journey of the imagination. From Tenniel (who turned Alice Liddell of dark hair with straight bangs into the fictional Alice of the long-flowing mane as we know her), to the surrealist Max Ernst to Salvador Dali and hundreds of others, the story of the Alice books is as much a story of gorgeous illustrations.

What the Alice books have meant to everyone else

Alice’s (hardly) tiny footprints are everywhere. If in Tokyo, you might end up at an Alice-themed restaurant that serves Mock Turtle Mimosa Salad by waitresses dressed up as Alice. A particular form of migraine-related disorder which makes it difficult to estimate depth and distance is called Alice in Wonderland Syndrome. Social scientists often use the Alice metaphor when talking of resource allocation (because as Alice kept alternately shrinking and growing, her position on the food chain changed).

While nonsense has been an integral component of our oral and folk traditions, its literary practice has been rather limited. One of the most exceptional influences of Carroll had definitely been on Bengali writer and poet Sukumar Ray (1887-1923), father of filmmaker Satyajit Ray.

His HaJaBaRaLa (1921)—a Bengali novella in which  a small boy falls asleep only to wake up in a world of chattering animals only to wake up again and find he was dreaming all along—has a plotline similar to Alice, and Ray’s idiomatic coinages have had a permanent impact on the Bengali language, much like Carroll had on English.