One Precious Book That You Can’t Part With 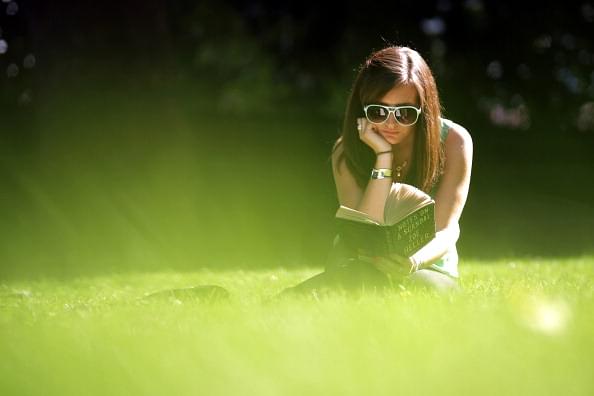 A woman reads a book in the sunshine in Victoria Tower Gardens in London. (Peter Macdiarmid/GettyImages)

All through the long, hot summer of 2017, dry fires raged in California. For a while, we, who were in Palo Alto, felt safe since the fires were far away. But soon we were waking up each morning to the news on TV that the fires were closing in. We all feared for the safety of our families, but I had something else to be nervous about: my precious collection of rare books. While we might tumble out safely, there was no chance I could rescue the books. That had me wondering, if I had to make a choice, what books would I grab (if I even could, that is) as I fled the fire. And then the fires seemed to die down, or were put out slowly, and I stopped worrying. I did, however, remember something Vince Price wrote in his book, I Like What I Know: A Visual Biography, “everyone with possessions plays the game of what you did save in case of fire”.

Later in the same year, I was vacationing quietly in Sedona, Arizona, and I happened to be reading that well-known book about books, A Pound of Paper by John Baxter. There is a chapter in the book, “if your house is on fire”. Inspired by that chapter, I wrote to my friends and asked one simple question, “if your house was on fire, (and I don’t wish for that!), and if you could save only one book from your bookshelf, which book would that be, and why? Do mention the uniqueness of the book (which edition, condition, signed/inscribed etc). The book should be irreplaceable because of rarity, sentimental value, inscription, binding, etc.” The response varied from a couple of sentences to detailed descriptions. One thing is for sure, I got to know my friends a little better after this exercise.

Essayist and novelist Pico Iyer, it turned out, had actually been in a California fire some years ago, and could speak first hand: “I must admit that my house did burn down once — I was surrounded by 70-foot flames and was caught in the middle of the conflagration for three hours, watching the flames pick through every last thing I owned. And on that occasion, the fire was moving so quickly (whipped on by 70 mile-per-hour winds) that I didn’t have time even to pick up the passport at my feet, or anything but my mother’s cat. One thing I learned from that experience is that whatever has value — analog photos, handwritten diaries, mementoes — is, by definition, what can never be replaced. And whatever can be replaced — books, clothes, furnishings — probably doesn’t have great value.

“The beauty of books for me is that they can always be replaced in some form (and I’m not a collector of signed books, or books carrying sentimental value, so for me it’s only the words, which never die, that matter). However, on the occasion my house was on fire, the only books I wished I could save were my three next books, all the handwritten notes for which got reduced to ash, stripping me of a future as well as of a past.”

Columnist and editor of Wisden India, Suresh Menon had no hesitation and knew exactly what those books should be: “close finish between autographed copies of books by V S Naipaul, Nelson Mandela and Don Bradman. The first is a reminder of my ‘Naipaul days’ when the great novelist rang me up out of the blue and I accompanied him on a part of his journey that culminated in a book. The second, of a historic Indian cricket tour of South Africa, the first-ever, and a meeting with Mandela which I have dined out on quite often. But I will plump for the Bradman Albums. Bradman and I sat on his porch and he signed on four different pages. It is a reminder of a warm, affectionate session, of a time when I was young enough and reckless enough to land up at someone’s place without an appointment and the thoughtfulness of a veteran who had spent a large part of his life avoiding the media.”

I was thrilled with author Gary Zukav’s response, as you’ll see here: “one book, its binding torn and pages yellow, is irreplaceable to me. Gitanjali, Rabindranath Tagore’s wonderful prose poetry translated into English from the original Bengali by its creator, Tagore, with a heartfelt introduction by W B Yeats, published by Macmillan and Co Limited, St Martin’s Street, London, in 1938, and brought back from India to me by my friend. Tagore’s words are jewels: ‘O thou lord of all heavens, where would be thy love if I were not?’ Who has written more bold, humble, magnificent and grateful words? Even today I pray his prayer: ‘O master poet… Only let me make my life simple and straight, like a flute of reed for thee to fill with music’.”

Author of Gently Mad, Nick Basbanes was torn between the flight that he and his wife would have to make with knees that made it difficult for them to move around let alone run, but the collector in him finally won out, and he offered his list. “As to which book I would regard as most precious? You must remember that two years ago I came to terms with such a separation, shipping 5,000 of my books off to Cushing Library at Texas A&M as part of their acquisition of my literary and professional archive. That included the thousand or so inscribed books I had assembled over a 40-year period, a fairly unique pot pourri that had at its core books inscribed to me by authors I had interviewed for my syndicated column. So they’re already gone. My New York Edition of Henry James, a real treasure, gone as well, my Melvilles, ditto. I kept a few things that I couldn’t bear parting with, my collection of Winslow Homer wood engravings in particular, which includes books but is mostly such classics as Snap the Whip and The Sharpshooter from Harper’s Weekly back in the day. And I did keep my magnificent set of Thomas Frognall Dibdin’s Bibliographical Decameron, 3 volumes, 1817 — as nice a set as you’ll ever see in every respect, with all points present.”

Author of Sacred Games, Vikram Chandra put it rather bluntly, “I’m afraid I don’t have any books that I’m so attached to; I’d probably try to get some old photographs of my parents and family. And — I’m not very good at writing short stuff; since my natural length runs to ‘long’ or ‘even longer’, writing short pieces seems like it requires much more discipline and effort, like writing haiku. So I’ve long stopped doing blurbs for books etc as well. I can’t seem to do it without obsessing about it, and then lose entire days fussing about with language.”

I felt this was an interesting contrast to the more bookish responses, and resonated with how Pico Iyer felt, that books can be replaced.

The author of Bapu Kuti, Rajni Bakshi picked a book that had actually been given to her, and so held sentimental value. “It’s a collection of musings by a person I knew very briefly, Jayantilal Parekh Jayatibhai, who spent more than 50 years as a sadhak at the Aurobindo Ashram — working closely with the Mother. I got to know him briefly, just before he died in 1999. He gifted me a ‘book’ which is actually xerox copies of what he wrote over the years for the Ashram magazine. He was also a painter.”

“My best books are on Kindle. So, if I have my phone, my books are safe!” This was author Abhijit Bhaduri’s tart but realistic reply. “I would like to save the (unpublished) manuscript of a book Feni is Five. It has the stories I wrote for my daughter. They are all in verse and have sketches and comic strips that I drew to pass on values and habits. I would feel sad to see it go.”

My friend Nisha, a patent engineer, said, “if I had to pick only one, I would probably pick my school textbook of Shakespeare’s Macbeth. I have had it since 1993 and it brings back fond memories of Mr Vivian Gass, my English teacher. He is the one person who got me interested in Shakespeare and literature and writing… The book is very special also because I have my notes scribbled on the sides… The book and the memories it carries are indeed priceless.”

As for my personal choice, I may end up thinking so long, that my house would be turned to ashes and I would still be thinking which book to save! However, if I have to make the difficult choice, it has to be the presentation copies between two of my heroes. A copy of Tagore’s Letters to a Friend (1929) in a beautiful gold-tooled blue leather binding with the Tagore inscription: “To Mahatmaji”, and signed by poet. Another one would be Gandhi’s Songs from Prison (1934) with the inscription “For Dear Gurudev”, and signed by the Mahatma.