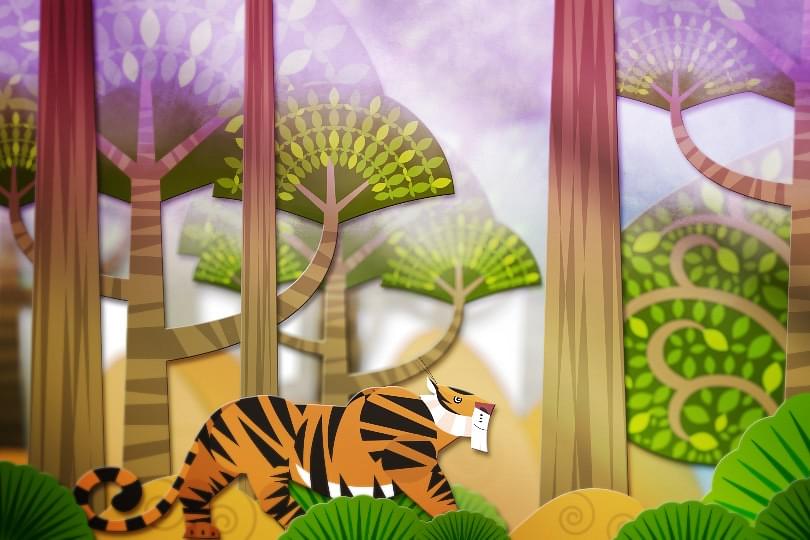 No lights, no camera, just action. This is how a unique experiment in movie making is coming along. Once it is complete, it will be India’s first crowd-sourced and crowd-funded animated film in Sanskrit. The name of the film, you might have heard it before, is Punyakoti.

“There is no shooting, no studio, no meetings. Some of the people working on the movie are those I have never met in my life,” says Ravi Shankar V, a man with immense passion for storytelling.

What marked the beginning of Shankar’s journey in Punyakoti? A bus ride from his home in Basavanagar to Infosys in Electronic City, Bengaluru. His colleague shared the story of Punyakoti, the honest cow. It is a story of how Punyakoti, the cow, comes face to face with a tiger, Adbhuta. Adbhuta is set to eat up Punyakoti, but she asks for time for feeding her young one. The cow makes a promise to return. She keeps her promise, and returns.

The story left Shankar and his colleague in tears. Countless thoughts flowed along with the tears. There were many questions, too. Why did the cow venture into the woods? Why did the tiger leave the dense woods and head towards the village? What about Kaveri, the river of Karunaadu, the village in which the story is set?

Shankar began rewriting the story, the untold tale of Punyakoti.

He ‘reverse engineered’ the story. “It is like a flashback of Punyakoti and Adbhuta,” says Shankar. He then gave the story, which he had turned into a book, to Sanskrita Bharati, which came out with an illustrated storybook in Sanskrit called Punyakoti.

It was this book that left world-renowned music maestro Ilayaraja impressed. “If you find a producer, make it into a movie, said Raja sir. That was where it all began,” says Shankar, nostalgically.

This was not his first animation project. He wrote the script for India’s first animated film Panchatantra. Having a penchant for cinema and storytelling, many of his lunch slots at Infosys had been spent talking about making movies. After a nudge from Ilayaraja, he began to think how he could turn this dream into a reality.

What would it take to turn a story into an animation film? It would cost around Rs 1 crore at least. “If 100 people gave me 1 lakh each and 100 animators gave me one minute of animation, the film would be made,” he says. It wasn’t going to be easy.

“Why not?” he asks. “If children can watch Japanese cartoon films, they shouldn’t find it difficult to follow Sanskrit. Moreover, it is the most scientific language. The pace of speech has been handled well and comprehension is not an issue,” he adds.

The search for a producer took a few months. Shankar met the chairman of Manipal Group and former Infosys board member Mohandas Pai in February 2015. Pai advised him to try crowdfunding through Wishberry, a crowdfunding platform. There was a problem. Never before had anyone asked for such a large amount on the platform. “The maximum amount raised during those times was Rs 27 lakh. Here, we were trying to seek a crore. We reduced the amount to Rs 40 lakh,” he said.

“There was a time when it looked like it had all come to a halt. We thought the campaign had failed, but when the campaign was going to end in three days, we noticed a surge in crowd-funding and made a record. Nobody had raised Rs 41 lakh through a platform like this.”

Just when he had raised enough money to start off, problems began to pop up. Some people in the team were in Thiruvananthapuram, some moved to Pune, a few were in Bengaluru. There was no coordination and no deadlines. “Back then, I shifted to the BPO sector. I applied all the knowledge of workflow management and the like, to film-making. Every shot was put in a different folder so it could be handed over to a different person.”

The Mechanics Of Movie Making

Everyone said “you can’t do it without a studio”. Shankar did not know the technical terms. “For long, I was taken for a ride by people who had been assigned tasks”, he said. Those working on different chunks would give him excuses. This prompted him to come up with the idea of “hanging out”. Google Hangouts is where everyone would come and meet and discuss everything in real time.

Shankar’s house transformed into a workspace. He took to “crowd sourcing talent” and looking for people online.

He got people on board and work was slowly taking off, but funds were getting exhausted. “The year 2017 was nightmarish. I was getting work. Most work was being rejected by the creative director Girish. So, every day, I would say this is the last day I am working on this project.”

Then, he thought that this was probably the only movie he would make in his life. “I then began to meet people once again for funds. I met a lot of ‘rich people’, only to realise that they don’t help. This was my biggest learning out of Punyakoti,” said Shankar. People who have given money to this dream project are middle-class. “Richness has nothing to do with money. It has to do with the heart. The rich were not giving me money but were trying to make money out of me. They would ask me, how much I would sell the movie for, or offer me loan,” he says. He rejected all such offers. His wife, whom he accords maximum credit, gave him a much-needed financial push. “If we had a third child, would we not bring that child up? So, let us regard Punyakoti as our third child and use whatever savings we have to see this through,” she said. “That day I stopped meeting people and asking for funds,” Shankar says with pride. It is now been around seven months since then and the film saw its trailer released on 22 May.

He has recently launched another crowd-funding campaign on Wishberry to raise funds for the completion and promotion of the movie.

Wishberry is running an online campaign for the next 60 days to fund the promotion of the movie. Please donate and share generously within your network through Whatsapp. I am not a big marketer. I am depending on friends... https://t.co/XkAfxI4opm

His children, too, have been an active part of the film-making process. Daughter Sneha has dubbed for the voice of the character Putta and his son, Abhay, according to Shankar, is the “quality check expert”. He would note the difference in details, like the shape of the earrings that a particular character has worn in two frames.

Shankar has given almost 6,000 to 7,000 man hours to this project. “I won’t make another film,” he says. People in his family and social circles have probably forgotten what he looks like. “I have not stepped out for anything but work.” He has slept after long hours of virtual meetings, perfecting every frame, and often woken up to a whiteboard that has details of pending tasks to bring Punyakoti to life.

Top actors like Roger Narayan and Revathy have lent their voices to the film. Maestro Ilayaraja himself has offered to compose music for Shankar’s brave retelling of an Indic story in Sanskrit.