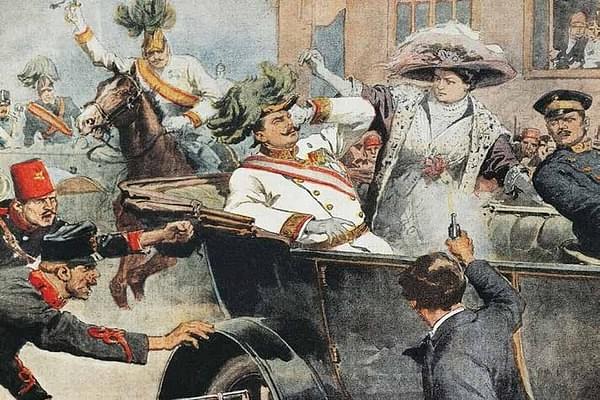 Both India and Pakistan think they are on a roll. This may be a good time, therefore, to remember 1914, when both Austria and Serbia were on a high, leading to disastrous consequences.

India is on a high. We have the highest growth rate in the world. We may have fiddled our time series statistics a little bit and of course we are nowhere near the scorching double-digit growth rates that China enjoyed for three decades. But we are happy with our growth rate. We are also thrilled that our Prime Minister has become a pal of the CEOs of Facebook, Google, Microsoft and so on. NRIs all over the world are very happy. And being the kind of fellows they are, they say so in Madison Square, in Dubai and in Wembley, apart from of course inundating social media with their proud messages.

We have some problems with tur dal and with law and order in rural Karnataka and rural UP. But then, for us, that is just par for the course. Low inflation, high growth, increasing FDI, declining current account deficit—come on, let’s not be churlish, let’s feel good about all this. We also have some newfound respect in the world. Obama came to Delhi for the Republic Day; Cameron is flattering us; the princes of the UAE turned up on the tarmac to meet and greet our leader. Everyone wants us to join the UN Security Council. Never mind that somehow we never end up joining that defunct and comical body. Our soft power, which is not just about NRIs, is unmatched. Just look at Bollywood. My friends: We are on a Roll.

Pakistan is on a high. Decent growth rates, an active Karachi Stock Exchange, an improving power situation (you can bet that just before the next election, power cuts and brownouts will drop dramatically) and above all, significant foreign policy successes. The US has been driven out of Afghanistan, like the Soviets were before them. Pakistan, its proxies, its allies and its friends are there and getting stronger by the day. Our God-given obligation to dominate the hills and valleys on both sides of the Durand Line cannot be denied or wished away.

Who was Durand anyway? He was just another ignorant infidel.

Most importantly, Pakistan’s all-weather alliance with the rising hegemon of the world—China—gains strength even as the declining hegemon—USA—keeps smacking Pakistan on the wrists. Who cares? China is willing and able to supply Pakistan with uranium, nuclear plants, bombs, missiles and much more. China is building awesome roads and awe-inspiring ports in Pakistan. The sun of the US has set. China is on the ascendant and Pakistan is now a closer friend, comrade, ally and protégé of the new giant—closer even than North Korea, which of course is also a dearly beloved friend of Pakistan’s.

The strategy of cracking down on some violent groups, while nurturing other groups like the LET, is paying off. Others may call them terrorists, but we know that many of them are Soldiers of Faith, chivalrous Knights of our great nation. People criticize Pakistan. But mere words cannot hurt a great country. No one does anything. No one will do anything. No one can do anything. We have atom bombs—plenty of them. And now that we have miniature bombs, we are that much stronger. We have definitely arrived. Chinese leaders visit us and that makes up for the fact that other world leaders are too scared to come to our country. And what if the English cricket team will not come to Pakistan? Did we not beat them handsomely in the UAE? We are simply the best! The best!

Going back to 1914, as a purely academic exercise, one can think of something similar.

Austria-Hungary is on a roll. Vienna is the centre of the artistic world (think Gustav Klimt), the world of the mind (think Freud) and the world of music of course. We are the torchbearers of Soft Power. But that’s not all. Austrian banks are doing well. The Austrian Stock Exchange is vibrant. Austria is the friend and ally of Germany, the rising star of Europe and indeed of the world. There are undoubtedly parts of the empire which are a tad unsafe, a tad poor and a tad forgotten (think Bosnia, or for that matter, Herzegovina)—but let’s not be churlish—Austria-Hungary is a power to reckon with.

Serbia is on a roll. After centuries, we have a country that is ours. And we are hell-bent on making sure that our companions (in race, in ethnicity and in faith) across the silly borders that still exist, join us in the great Pan-Slavic dream. We will not rest until the Slavs achieve their God-given obligation and destiny of being united and defeating the Turks on one side and the Austrians on the other. In order to do this, we encourage violent groups. Others refer to them as terrorists and assassins. We know that they are Soldiers of Faith and Knights of the great Slavic nation. We are not afraid of silly countries like Britain. The power of Mother Russia stands with us. Is not the Tsar the champion of all Slavs? We will continue with our strategy of funding and directing terror attacks against the effete Austrians. We will provoke them into a fight—and then teach them a lesson. We have the power, the army, the weapons. We are simply the best!

The denouement of 1914-18 left the Austro-Hungarian empire chopped into pieces and turned Vienna into a provincial city where Orson Welles found dubious drug dealers. It also left the Pan-Slav dream underachieved, only to be repeatedly cruelly defeated in 1941 and then again in 1990.

Obviously, no two situations are identical. No two countries can be made to fit a simple historical pattern. The only lesson one can pick up is that “being on a high” is simply not smart.

Whatever we may say to ourselves, the Indian growth rate is not all that great. We need sustained double-digit growth rates—sustained for two decades, not for a year or two. Without that, we are not going to make an appreciable dent in our poverty. We need a less predatory State—one which encourages business and entrepreneurship, both domestic and foreign, which does not use the taxman to attack and destroy wealth-generating activities, which does not stifle the economy with hostile actions at the ground level, even while sounding positive from 30,000 feet up in the air.

We need to be realistic about China and Pakistan. Preaching moral sermons to either of them will get us nowhere. With China, we can and we should figure out where our interests overlap, even if that’s only in some limited areas. We should strengthen those spheres. With Pakistan, we can and probably should maintain a symbolic level of cordiality—certainly not attacking their visiting musicians, but allowing them to sing. We should keep our rhetoric levels low and work on our economy, without hysterical distractions. Beyond this, we can and we should expect no positive outcome.

The fact is that they are on a high. And when they are on a high, it is unlikely that they will bother about what the world says. It will take them years to work it out that their new ally, China, is as unreliable and selfish as their old ally, the US. If and when that happens, perhaps our relations with Pakistan will improve.

Understanding the complacent arrogance of the Austrians, the love of terrorism on the part of the irredentist Serbians and their mutual inability to get beyond childish rhetoric and meaningless truisms should help us in navigating through the difficult decade ahead of us with wisdom, humility and a relentless focus on what really matters—our economy, which, let us face it, should be chugging along twice as fast as it is today. We should not be on a needless high. Heads-down intelligent decisions that help us liberate our own economic energies, and hard work—this and this alone should be our mantra.

There is every possibility that terrorist attacks will increase with the specific intent of derailing our economic story. We can and should prevent these attacks. When we fail in preventing them, which doubtless will sometimes happen, we must respond efficiently, not clumsily. We must then get back to building our economy, shrugging off the cowardly attack. If Austria had not responded in anger to the act of a Serbian terrorist group, the beneficiary would have been Austria. We must always remember this.