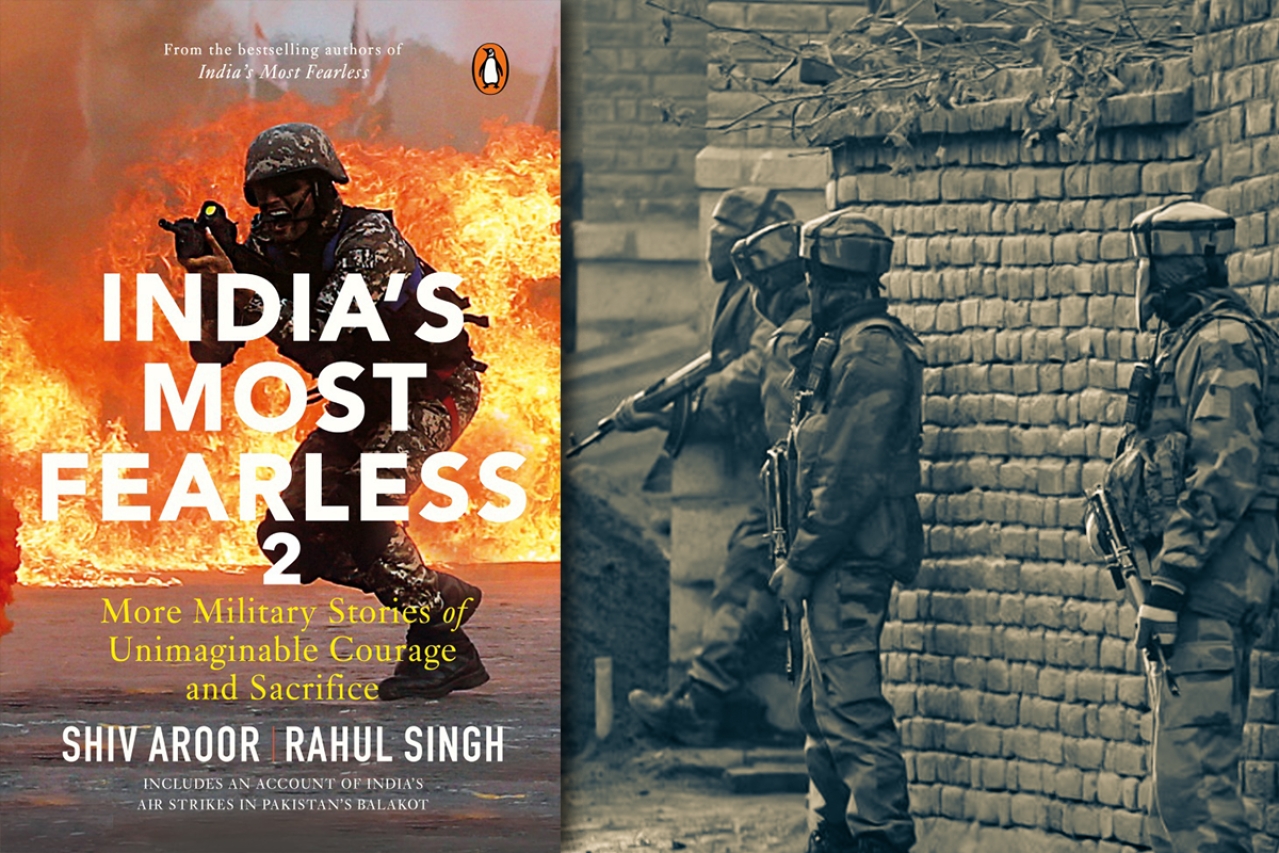 The book cover on India’s superheroes

What does it mean to be a soldier in the Indian armed forces? We have all heard words and phrases like ‘duty’, ‘honour’, ‘valour’, ‘chivalry’, ‘indomitable courage’ applied to our soldiers to the point where they have been worn down to smooth cliches. Is it possible to talk about the soldierly life to a new generation without once again resorting to familiar cliches?

Shiv Aroor and Rahul Singh do not answer this question. Instead, they begin the sequel to their popular book India’s Most Fearless: True Stories of Modern Military Heroes by telling us a love story.

Major Sashidharan Vijay Nair fell in love with Trupti when he was 27 years old. A few months into their engagement, Trupti was diagnosed with autoimmune disease of the central nervous system that left her confined to a wheelchair.

From here on, they were told, the disease would only get worse, and never be cured.

Despite insistence from friends, family, and by Trupti herself, Major Nair was adamant that nothing would stand between him and the woman he loved, least of all the prospect of a hard life ahead.

The couple got married soon, and with Trupti now paralysed from waist below, Major Nair dedicated his life to both his uniform and to caring for his wife.

On 11 January 2019, six years after their marriage, Major Nair was killed in an improvised explosive device (IED) blast in Nowshera along with Rifleman Jiwan Gurung.

Why would someone choose a life so hard and willingly give it up so early? There are no ready answers, and one is forced to take refuge once again in those familiar cliches — duty, honour, chivalry, valour, and indomitable courage.

But this is not what India’s Most Fearless – 2 is about. The book is about something bigger.

We know the histories of the great wars that India has fought — 1947, 1962, 1965, 1971 and 1999. We know the names of the heroes too, Lt Gen Harbaksh Singh, Sam Maneckshaw, Arjan Singh, Vikram Batra, Manoj Pandey, Albert Ekka, Abdul Hamid, Kulidp Singh Chandpuri — all names that the passage of time has engraved upon our memories. They have been celebrated in cinema and venerated in the media.

With each passing year, it appears increasingly certain that full-fledged wars of the previous century will become a remote possibility. But like the rest of the Third World, our borders still remain tense.

We do not have the luxury, like the nations of the Anglo-Saxon New World, to have inherited a clean slate upon our birth as a modern nation-state, having wiped out the burden of the past and begun anew. Like our brethren in Africa and rest of Asia, we have had to forge a nation upon the smoldering embers of generations of tribalism and inter-ethnic conflict made worse by poverty, overpopulation, dwindling natural resources, and now climate change.

And so even though the great wars are behind us, and today they appear like they may never return in our lifetimes, the nation continues to bleed through cuts and wounds.

Fortunately for us, men and women of steel continue to gush forth to defend it.

This is what makes this project by Rahul Singh and Shiv Aroor stand out — it comes at the precise historical moment when these new heroes need to be rescued from forgotten news cycles and committed to the nation’s memory.

In years to come we’ll read more about them, watch films on them, listen to conversations of their heroic deeds. That is just the way a nation’s historical memory works. We will know then that it all started with this book.

India’s Most Fearless is a meticulously researched book. In reconstructing scenes of battle, the authors have drawn on various sources, including award citations, interviews with colleagues, commanding officers, and family, and extensive on site field experience, all of it narrated with the skill of an experienced raconteur.

As one reads about the ambush laid out by Lieutenant Navdeep Singh, only five months into his army career, waiting for a party of infiltrators in the dead of the night to walk within his range of fire, one can feel one’s own heart race as the tension builds to its final, terrible climax.

Or about Captain Pawan Kumar who gunned down a militant and enabled the capture of two others who had taken an entire building hostage, despite having a bullet enter his chest and rip off a piece of his heart.

Or the awe-inspiring deeds of Major Mohit Sharma of 1 Para who went undercover posing as a militant and killed two terror recruiters in Shopian in 2004.

Each chapter in the book is a rollercoaster ride of emotions. You can feel the adrenaline rush as you read vivid descriptions of counter insurgency operations in inhospitable terrain brought to life before your eyes. This is followed inevitably by the gut wrenching tragedy of the dreaded phone call that would be made to the young soldier’s home, informing them that the brave soldier has fallen in the line of duty.

A son and a husband lost, a hero born.

Each of the 14 stories in this book stands out as a tale of exceptional valour. Among the 15 soldiers who find mention in the book there are three Ashok Chakras, two Kirti Chakras, nine Shaurya Chakras and one Sena Medal awardees.

Not all heroes have names though. As the prologue to the book describing the planning that went behind the Balakot strikes makes it clear, much of the business of keeping the borders safe happens below and beyond the public gaze, by countless men and women whose names and faces must forever remain hidden from history.

Their heroism, must, of necessity go unacknowledged by those for whom they risk their all.

For readers interested in the nuts and bolts of special forces operations, the book is a treasure trove. We learn about the intricacies of setting up a cordon around a populated area where militants are holed up and about spotting a group of armed infiltrators trying to cross a border in a dinghy.

The reader learns how infiltrators walk single file in snow, each person stepping only into the footmarks of the person ahead of him to prevent security forces from guessing their numbers, and about the Fatal Funnel — a term used in close quarter combat to describe the cone shaped path leading from the entry, where the assaulter is most vulnerable, to the defenders in the room.

The stories collected in this compilation cover acts of exceptional bravery and fortitude from all the three services and different theatres of operations — from Kashmir, to Manipur, to Mumbai.

One could be forgiven for thinking that the book is a dry chronicle of a nation at war with its own people.

It is anything but that. The writers peel back layers to bring forth the various dimensions of an internal conflict — the loss of civilian lives, and the pain suffered by innocents caught in the crossfire; as also the rapport that security forces share with people on the ground, often going out of their way to win their trust.

An interesting anecdote in the chapter on Captain Rishi Rajalekshmi (Sena Medal) who was to lose the bottom half of his face after being hit by two bullets in the jaw in an encounter with militants in Kashmir recounts how the young Captain pacified a stone-pelting agitation in Tral protesting against power outages.

The Captain walked upto the elders among the crowd and assured them that he would not leave the scene until their problems were solved. True to his word, the Captain left only after the local administration had swung into action and addressed the locals’ concerns.

However, as the authors themselves caution, these tales of valour “are not a romanticisation of conflict. If there’s one thing we’ve learnt in telling these stories, it is the silent and humble trust of every soldier that India will not send them into combat unless absolutely necessary. That their heroism comes at a premium. And that the country would rather its soldiers were safe, than forced into a situation where they have to decide between life and death.”

Whether or not you are interested in military history and operations, India’s Most Fearless 2 is a book that is bound to thrill you, to tear you up, to break your heart, and at the end of it all leave you with hope and a warm heart.

Get Swarajya in your inbox everyday. Subscribe here.
Tags:
93 Shares