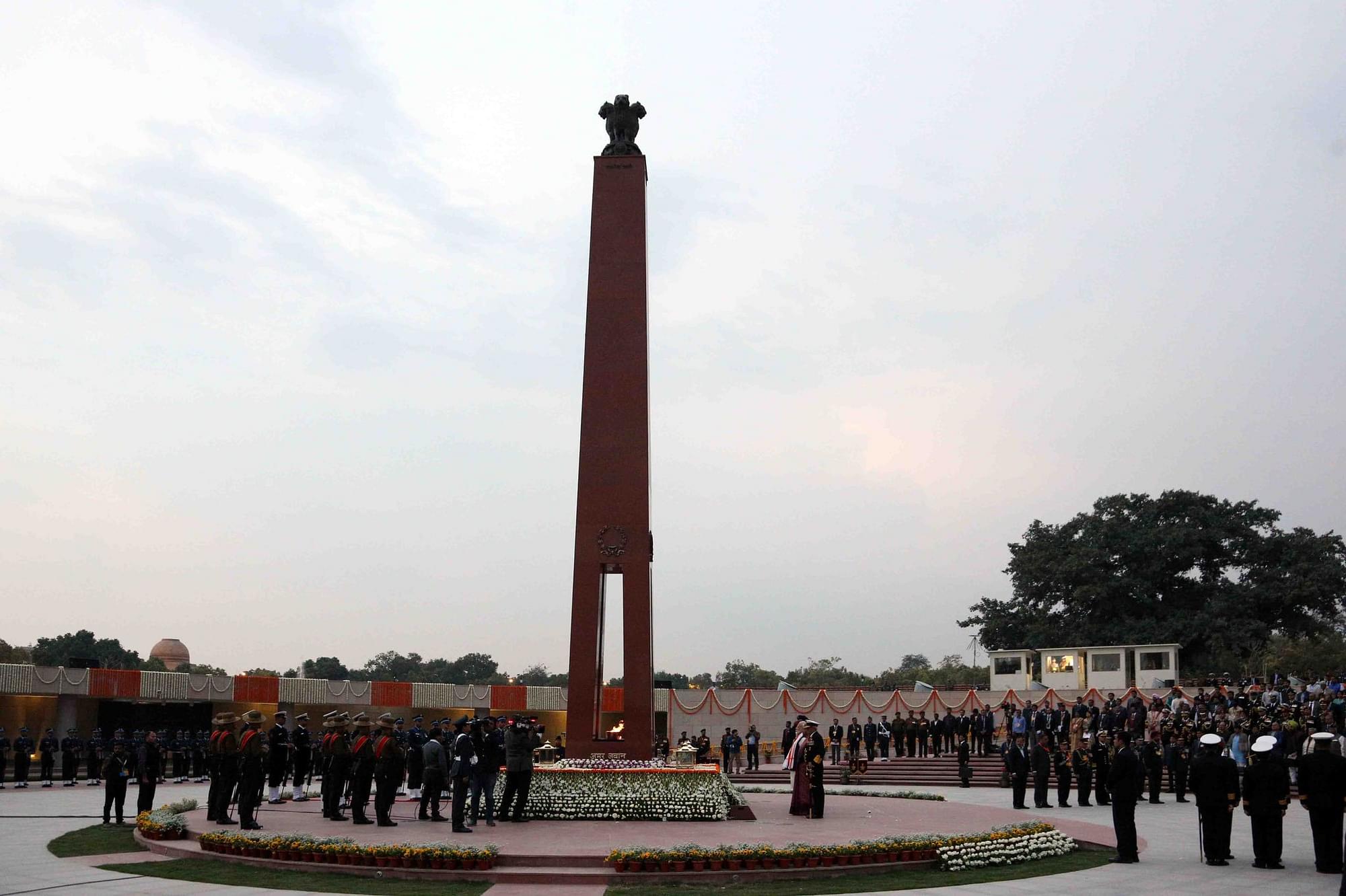 The soldier above all other people prays for peace, for he must suffer and bear the deepest wounds and scars of war — General Douglas Macarthur

It was six decades in coming, but independent India finally has a war memorial to honour its fallen heroes. Inaugurated by Prime Minister Narendra Modi on 25 February 2019, the memorial is spread over an area of 40 acres and is located right behind India Gate  — another war memorial, albeit one built by the British to honour soldiers of the British Indian Army who fell fighting for the British Crown in the First World War. The irony arising from the proximity of the two memorials is not lost even on the casual observer. The British built their memorial four years after their war ended. Independent India took 60 years to build its own.

Do We Really Need A War Memorial?

War memorials are nothing new. Throughout history they have been built by kings and emperors to commemorate victories in battle. For instance, the famous Vijay Stambh at Chittor, built by Rana Kumbha in 1448 CE to commemorate his victory over the armies of Malwa and Gujarat sultanate contains Hindu, Muslim and Jain iconography to honour the religiously diverse composition of the Rana’s army and empire.

But with the arrival of representative democracy, the nature of war memorials changed. They no longer represented the glorification of an empire, but the grief, gratitude and pride of a community that gave up the flower of its youth to defend a nation it called its own.

In the UK for instance, hundreds of war memorials were built by local communities at the end of the First World War. Today, there are over 2,000 listed war memorials in the UK — with thousands of other smaller community-built structures scattered across small towns and communities.

What the modern war memorial stands for is a sense of collective ownership, of belonging together to one community, one family, one nation. It reminds us that the pain suffered by those, whose names are inscribed on the memorial is not theirs alone, but is ours too, and it reminds us, that someday, we too may be asked to sacrifice things we hold dear for the family we belong to. It is nothing short of a chronicle of a nation’s journey — from one adversity to the next; one that all citizens must read and remember.

A war memorial, then, is a solemn place. It is not a glorification of war but a quiet reminder to us of what war means. As much as we may dislike war, it remains, to use E O Wilson’s words, “humanity’s hereditary curse”. In times of peace, we would do well to remember those who suffered this curse so that we may live without it.

The National War Memorial is designed in the form of four concentric circles that characterise the journey of a soldier from birth to martyrdom. The outermost circle called the Rakshak Chakra or the ‘circle of protection’ is made up of a ring of dense trees that symbolises the soldier’s promise to the nation that they stand in protection on the borders at all times. A plaque at the entrance guides the visitor through the layout of the memorial concluding with the following words:

Either Slain thou Shalt go to Heaven;
Or Victorious thou Shalt Enjoy the Earth.

The second circle called the Tyag Chakra or the ‘circle of sacrifice’ is a series of granite tablets in circular pattern. It is based on the Mahabharata war formation of Chakravyuh. Upon these granite tablets are inscribed in golden letters the names of all soldiers who made the supreme sacrifice in the wars that India has fought, starting from the India-Pakistan war of 1947 to Kargil 1999. There are a total of 16 such circular granite walls which display the names of 25,942 soldiers.

• Battle of Gangasagar  — remembered as one of the most intensely fought battles of the 1971 India-Pakistan war. Located on India’s border with Bangladesh in Tripura, Gangasagar witnessed the engagement during which the only Param Vir Chakra of the 1971 war was awarded — to Albert Ekka of 4 Guards for his gallant action in clearing out enemy positions in the face of heavy machine gun fire.

• Battle of Tithwal — the Battle of Tithwal was the longest battle of the 1947-48 India-Pakistan war. Pashtun militia backed by Pakistani Army launched a massive attack on the Indian post at Tithwal. Lance Naik (later Honoray Captain) Karam Singh of 1st Sikh won the Param Vir Chakra in this battle for fearlessly engaging the enemy in hand-to-hand combat and inflicting demoralising losses on them, despite being severely wounded himself.

• Battle of Rezangla  — a battle that went down literally to the last man, Rezang La was fought in the inhospitable terrain of Ladakh against a vastly superior Chinese force. Major Shaitan Singh of 13th Kumaon won the Param Vir Chakra for his indomitable courage in refusing to leave his post till his last breath.

• Battle of Longewala  — perhaps, the most well-known of independent India’s battles, immortalised by J P Dutta in the Bollywood classic, Border. Maj (later Brigadier) Kuldeep Singh Chandpuri of 23rd Punjab was awarded the Mahavir Chakra for inspiring his small band of soldiers to hold off an entire Pakistani Brigade over the course of a night. The battle is also one of the finest moments of the Indian Air Force whose Hunter and Marut aircraft destroyed close to 40 Pakistani tanks in the engagement, taking the fight out of the enemy completely.

• Operation Meghdoot — Operation Meghdoot was launched by the Indian Army to take control of the Siachen Glacier. Soldiers of the 8th J&K Light Infantry including Lance Naik (later Honoaray Captain) Bana Singh and Naib Subedar Chunni Lal scaled a sheer wall of ice 500m high to capture the strategic Quaid Post from Pakistan. This post was later renamed Bana Post in honour of Bana Singh, who was also awarded the Param Vir Chakra for the feat, considered unparalleled in high-altitude warfare. Major Varinder Singh won the Vir Chakra, while Naib Subedar Chunni Lal was awarded the Sena Medal during this operation. Without Meghdoot, India would have lost control of Siachen with disastrous strategic consequences.

• Operation Trident — Operation Trident was a naval battle during the 1971 India-Pakistan war in which Indian Navy attacked the Karachi harbour sinking four enemy ships and damaging another. Commander B B Yadav was awarded the Mahavir Chakra for this operation. Navy Day is held on 4 December each year in commemoration of this important naval battle.

The fourth and innermost circle of the memorial is called the Amar Chakra or the ‘circle of immortality’. It features an obelisk along with an eternal flame symbolising immortality of the spirit of the soldier.  The eternal spirit flame is also a reminder of our duty towards those who laid down their lives for us — our duty to reassure them and their families that they will never be forgotten.

In addition to the above, the memorial contains a landscaped garden called the Param Yoddha Sthal, where busts of the 21 Param Vir Chakra — India’s highest military decoration — are displayed.

As one exits the memorial, there is a small souvenir shop managed by the Army Wives Welfare Association that sells beautiful memorabilia. Entry to the memorial is free for all but make sure you buy something from the souvenir shop. Not only will it add a quiet dignity to your home, the proceeds from the purchase go towards the welfare of soldiers and their families. War memorials after all are meant to remind us of the human cost of war — they remind us of the heavy price that was paid by some for the peace we enjoy today.

Watch: India’s National War Memorial Is Important For What It Reminds Us