Ten Things That Are Wrong With Indian Agriculture 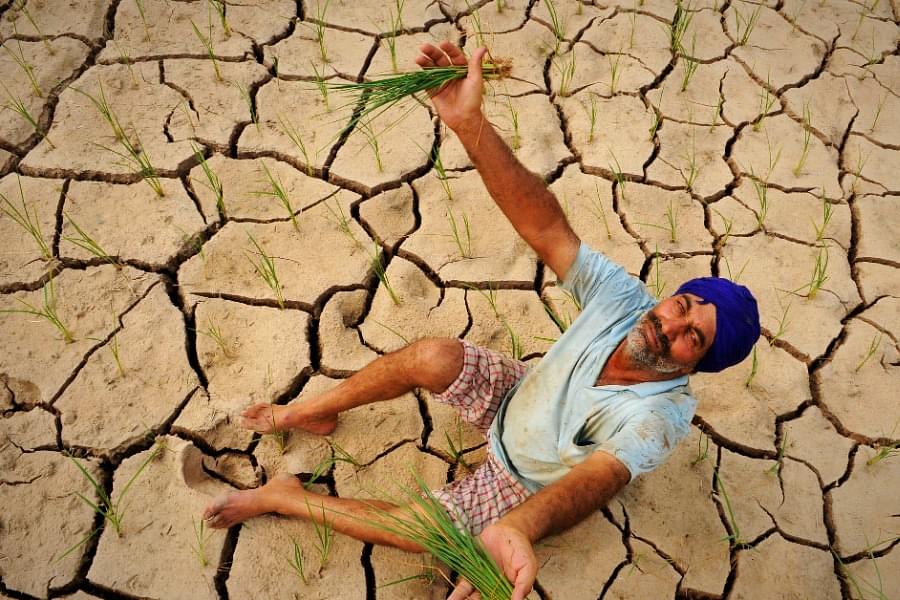 It is the farm policies that are failing the Indian farmer. (Bharat Bhushan/Hindustan Times via Getty Images))

Sins of omission and commission have plagued Indian agriculture for as long as one can remember. This is a perversity, for — at least in terms of popular beliefs — India lives in its villages, and villages are essentially about farming even today. This over-dependence on agriculture for livelihoods should have spurred the creation of competent policies that serve both farmers and the country well. But over the last 70 years, we have got almost everything wrong in terms of agricultural and land policies. Even where we got things right, we have managed to snatch defeat from the jaws of victory.

So, what’s gone wrong, and what can we do to fix it? More important, what should we avoid doing in future? Here’s a laundry list.

First, the most obvious things that are wrong relate to two numbers: agriculture’s share of gross domestic product (GDP) is one-third the size of the population dependent on it. The other number that should worry us is the shrinking size of farms. According to the 2010-11 agricultural census (the next five-year census will take some time to be unveiled), 67 per cent of farms are marginal (under one hectare); small farms (under two hectares) are another 18 per cent. In short, 85 per cent of farm land is small or marginal, with those tilling it having minimal capacity to invest in improving productivity. The only logical solution is to speed up the dependency on farms, by creating non-farm jobs, and investing in agro-industry, cold chains and rural warehousing, which will allow farmland to be sold and consolidated to larger sizes. But politicians love small farmers, for it gives them two advantages: they can use the large numbers of poor farmers to advocate loan waivers before elections and obtain a bulk vote; second, they can use the same logic to obtain higher support prices which will benefit large farmers. Most Members of Parliament (MPs) and Members of the Legislative Assembly (MLAs) are in cahoots with large farmers, though they use the shoulders of small farmers to shoot from. This is what we need to fix: break the nexus of big landowners and lawmakers by enabling small and marginal farmers to make a living outside farming.

Second, there is an obsession with subsidies, and a conspicuous lack of investment in irrigation, cold chains, and warehousing and interconnection of markets. In the last central budget, agriculture and agriculture-related subsidies, including food and fertiliser subsidies and interest rate subventions, amounted to over Rs 2.61 lakh crore. And remember, this amount does not include the subsidies provided by states for seeds, power, diesel, procurement bonuses, et al. India had around 160 million hectares of land under cultivation, according to the 2010-11 agricultural census. This works out to a total subsidy of over Rs 16,300 per hectare annually. It would make a lot of sense to abolish half the subsidies and give each operational holding a direct annual subsidy of Rs 8,000 per hectare, or Rs 4,000 per crop season. The remaining subsidies can be used to keep urban food prices reasonable, and for buffer stocking operations. This will not only help farmers but also recreate a vibrant market for farm produce.

In some areas, subsidies have even been counter-productive. A case in point is urea. Its overuse has debased millions of hectares of land in many parts of the country.

Third, there is huge distrust of the market. While politicians are right to worry about food becoming too expensive for consumers, or procurement prices being unremunerative for producers, there is simply too much intervention in the working of the agricultural marketplace. We have inter-state restrictions on movement in farm goods, we have farmers being forced to sell their produce in mandis where traders can exploit them, we have export and import duties being imposed arbitrarily whenever domestic prices are too high or too low. We need to create one market for India, and a small amount of money for price stabilisation schemes at the state level, so that neither the farmers nor the consumers are too badly hit by yo-yoing prices. Agriculture would benefit from vibrant markets, including forward markets, where farmers can sell their produce in advance without fear of prices crashing just after harvest time.

Fourth, our farm and land-related policies are too centralised and far removed from state-level realities. India does not need a single minimum support price for any farm product, or uniform food subsidies, or a national-level Food Security Act or Land Acquisition Act. Each state faces a different problem on food security, and land availability is not the same everywhere. The agricultural problems of flood-prone Bihar are not the same as those in the drought-prone districts of Maharashtra, Rajasthan, Gujarat, Karnataka or Telangana. The food security needs of people in Odisha’s Kalahandi are not the same as those in agriculturally prosperous Punjab, Haryana and western Uttar Pradesh.

Each state must have its own variation of the Food Security Act, and land acquisition policies should be state-needs-driven, not decided by non-governmental organisations (NGO) and do-gooders in Delhi. The United Progressive Alliance (UPA) era centralisation of pro-farmer schemes have damaged real food security and put a roadblock on land sales. The Narendra Modi government has continued the follies. There is a case for limiting central procurement schemes to only buffer stocking requirements and leaving states to set their own procurement targets for local crops. The same applies to land acquisition laws. They must be legislated at the state level. Land acquisition laws, if they are too expensive, prevent farmers from selling easily when they have other career options, or when in distress.

Fifth, the wrong crops are encouraged. India has nearly a sixth of the world population, but barely four per cent of its water resources. But our agricultural policies wrongly support water-intensive cultivation, whether it is in terms of encouraging sugarcane or rice, or high-yielding wheat or cotton. The pursuit of yields and profits has ensured that farmers are now focusing on exotic hybrids, which also use more water. Since most states subsidise power to agriculture, farmers use more groundwater to feed thirsty crops. This is not only lowering the water table in most states but also building up to a new agricultural crisis. According to one estimate, Indian agriculture uses 90 per cent of total water drawn, but produces only around 15 per cent of GDP. The future of Indian agriculture is about shifting away from water-intensive crops like sugar and rice and going back to more coarse cereals.

Sixth, the logical answer to the problem of low agricultural incomes is to enable farmers to take to dairying and animal husbandry. This means, as economist Ashok Gulati wrote last year in The Indian Express, prosperity depends on both the plough and the cow. That is, more investments are needed to raise agricultural productivity, and animal husbandry policies must facilitate dairying, which helps farmers earn an income when crops fail. But illogical cow protection laws, where farmers can’t get rid of cattle past their productive age, result in farmers shifting away from maintaining cows. In fact, cow protection laws — and more recent threats from vigilante groups — have made farmers reluctant to buy cows, and India is now more buffalo country than cow country. Less than 45 per cent of the country’s milk production now comes from cows, and Indian cow breeds are slowly dying off. To make the cow important again for Indian farmers, anti-cow slaughter laws either need to be reformed, or more investments made in cow shelters after their useful lives are over. Merely banning cow slaughter makes no sense without the support system to facilitate a retirement and exit policy for superannuated cattle.

Seventh, we need to expand corporate and contract farming by allowing farmers to easily lease fragmented landholdings. They should be able to collect not only lease rentals, but also a share of the revenues from higher productivity. While this will help land owners, farm labour will need to be upskilled so that they can find non-farm jobs. Again, this action needs to be facilitated at the state level. Agriculture has to be driven by states, and not the Centre.

Eighth, land laws need to be changed to allow farmers to change the land-use pattern without waiting for their areas to be notified for urban expansion, infrastructure building or industrial use. Currently, the intrinsic value of the land farmers hold is often higher than market prices for farm land, since our policies only allow farmers to buy farm land. Thus, rising land values go largely to middlemen and land aggregators, who buy farm land well before they are notified for other uses. In short, poor farmers sell meagre pieces of land to other farmers, and the bigger ones grab the premium when land values soar because a road is to be built or a municipal area expanded. The law should allow farmers to sell land for any use, so that they get the real value and not middlemen. The only safeguard we need is to designate no-development zones (or moderate development zones) in advance, and after that, any farmer should be able to sell his land for any use.

Ninth, producer cooperatives and marketing and branding need to be encouraged in all areas of the country. When farmers cultivate, say, rice, they get Rs 15-16 per kg of paddy. The same rice, when packed and branded, sells for twice or thrice the price at the mall. It should be common sense that farmers should be adding value to their produce and not selling paddy. This is what Amul does with milk producers. We need Amuls for all farm products, so that the value is captured not just by retailers and factories, but farmers themselves.

Tenth, farmers need financial products tailored to their needs. At one level, this means good crop insurance, but at another level, it also means investment opportunities tailored to their needs. For example, when farmers sell meagre amounts of land for road-building, it may make better sense for the government to pay them in the form of annuities, so that the money is not squandered in expensive weddings or even liquor. Reverse mortgages for superannuated farmers should be considered.

As the far-from-exhaustive list above shows, the problems of Indian agriculture do not begin or end with the farm. The entire ecosystem needs change; the farmer needs less financial mollycoddling and more sensible policies drawn up closer to where he lives.

Delhi’s babus, or even their counterparts in state capitals, do not have all the solutions. They have crippled agriculture by offering it crutches like farm loan waivers and humongous subsidies when it is capable of standing and walking on its own. Indian farm policies have psychologically and physically made a cripple out of a potentially healthy sector. Those whose hearts bleed for farmers need to get out of the way and let Indian agriculture bloom.