The Gorgeous Geometry Of Gender 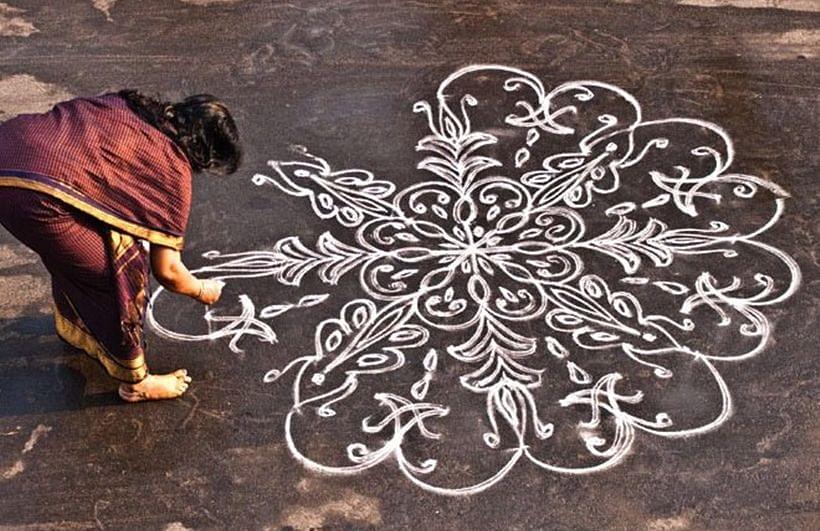 A woman works on a kolam in front of her house.

“Masanam marga-sirso ham,” says Sri Krishna in the Bhagavad Gita when listing his opulence. In Tamil Nadu, it is called Margazhi — one of the most important months in the Tamil calendar, as it takes the greatness of Tamil culture to the zenith through many art forms. Of course, the most well-known element of this month for the residents of Chennai and other regions is the music concerts that are held in the sabhas of the metropolis. However, this is a later day phenomenon. The real significance of Margazhi, though, lies in its intense manifestation of multiple art forms, literary and spiritual traditions.

Let us start with kolams. The Margazhi month ushers in an informal competition between households over kolam designs, drawn at the entrances of their homes, on the streets. The contest is played in good spirit, never becoming a subject of envy. Kolam is different from rangoli. It is drawn by joining dots symmetrically that gives shape to aesthetically pleasing forms. Kolams can be abstract forms of flowers, birds, Shiva linga, chariots and Vishnu’s conch. Most are decorated with pumpkin flowers mounted on a clump of cow dung.

An insightful description of kolam has been given by, hold your breath, none other than Wendy Doniger, before she discovered the (academic) market value of being a shallow Hindu-phobic. She says:

“The women who make these rice power (sic) designs sometimes explicitly refer to them as their equivalent of a Vedic sacrificial hall (yajnashala). ...(T)he visual abstraction of designs such as the South Indian kolam is the woman's equivalent of the abstraction of the Vedic literature, based on geometry (the measurement of the sacrificial altar — one reason why mathematics developed so early in India) and grammar (the central paradigm of order out of which all commentary on Indian sacred text develops). The rice powder designs are a woman's way of abstracting religious meanings; they are a woman's visual grammar.”

In fact, one does not need a Doniger to tell that the kolams embed in and encode in themselves divinity and vedic yagna respectively. However, Nehruvian India and Dravidianist Tamil Nadu have often discouraged the study of such indigenous phenomena like kolam that we need a David Shulman or Wendy Doniger to tell even such simple truths about us, and thus transfer the power of narratives about ourselves to them.

Krishna being the process of yagna as well as its ultimate end is the personification of Margazhi, and thus kolams naturally start representing him through designs. Today, mathematicians are showing interest in these designs. In Chennai, Professor S Naranan, an astrophysicist for more than four decades, had been inspired by recreational mathematician and maths-educationist in his own right Martin Gardner, and has been studying kolams for years. It was only before his eightieth birthday in 2010 that Prof Naranan, at the spur of the moment, sent his work to Gardner. Gardner, who at that time had stopped writing his famous column in the Scientific American, was so impressed by the work that he responded saying had he been still writing he would have devoted an entire column for Prof Naranan’s work on kolams. As Sudhakar Kasturi, a well-known Tamil science fiction writer, showed this author, the Hemachandra-Fibonacci patterns Prof Naranan discovered in groups of traditional kolams can also be discerned at ancient temples in Tamil Nadu known for their architectural work.

Margazhi simply fills the front space of every household in villages and towns, which are not yet lost to values of the West or alien monocultural cults, with these enigmatic, geometric kolams embedding in them the divine.

In the early hours of the morning, young women sing Thiruppavai of Aandal, the only woman among the 12 alvars, who, in praise of Lord Vishnu, proclaimed that this dynamic web of life as the body of Vishnu. Her celebrated Thiruppavai sung as wakeup-call hymns in the month of Margazhi (December-January), speaks of the agriculturist homestead, fish-filled paddy fields and the dynamic hydrological cycle. Vishnu is the lord of deluge and the very seed of all life forms. Thiruppavai can also be seen as the act of calling the person immersed in inner spirituality to serve the society guided by spiritual equanimity. Combining bridal mysticism with keen observations of nature and call for collective participation, the songs are perhaps unique in world devotional literature. Here, there is also a vibrant form of Hindu ecological thought, apart from the well-known advaitic basis of Hindu ecological thoughts as held by Norwegian philosopher Arne Naess.

Traditional commentators have revealed in these hymns of Aandal, without any text-torture or convoluted interpretations, various levels of interpretations, which are quite astonishing. For example, in the eleventh hymn, Aandal stands at the doors of a sleeping girl companion and sings to wake her up, to join her and her companions to visit Vishnu. Here, Aandal describes the girl as a ‘peacock having snake-hood shaped hip’. Kanchi Prathivathi Bayangaram Annangaraacharya, in his commentary, points out that this description of a female has been done through a male's eye by Aandal. Here, he points out that such fluid gender transition moments are quite common in high emotional states as many males consider themselves as females with respect to Vishnu. The possibility of such a state, where the gender barriers become flexible, is hinted at here, says the traditional Vaishnavaite commentator. The fearless and in-depth treatment of the subject is astonishing to say the least. It also shows how the traditional Hindu approach is far more original and bolder than the shallow Freudian deconstruction the amateurish scholars from the West and their Indian copycats attempt at.

And we, of all generations, even a few decades ago, learnt these melodious hymns by heart as children and recited them every morning in the month of Margazhi. Surely, the hymns have the miraculous ability to grow with us once they were sown in the heart. Today, as Margazhi comes, kolams are there, but the pumpkin flower is missing. Thiruppavai is no longer taught as was done just two generations back. Gradually, we are diluting our heritage and Margazhi is becoming synonymous with the musical concerts of the city dwellers — with all its behind-the-stage power politics, not to mention the obsessive compulsion with secularism rearing its ugly head.