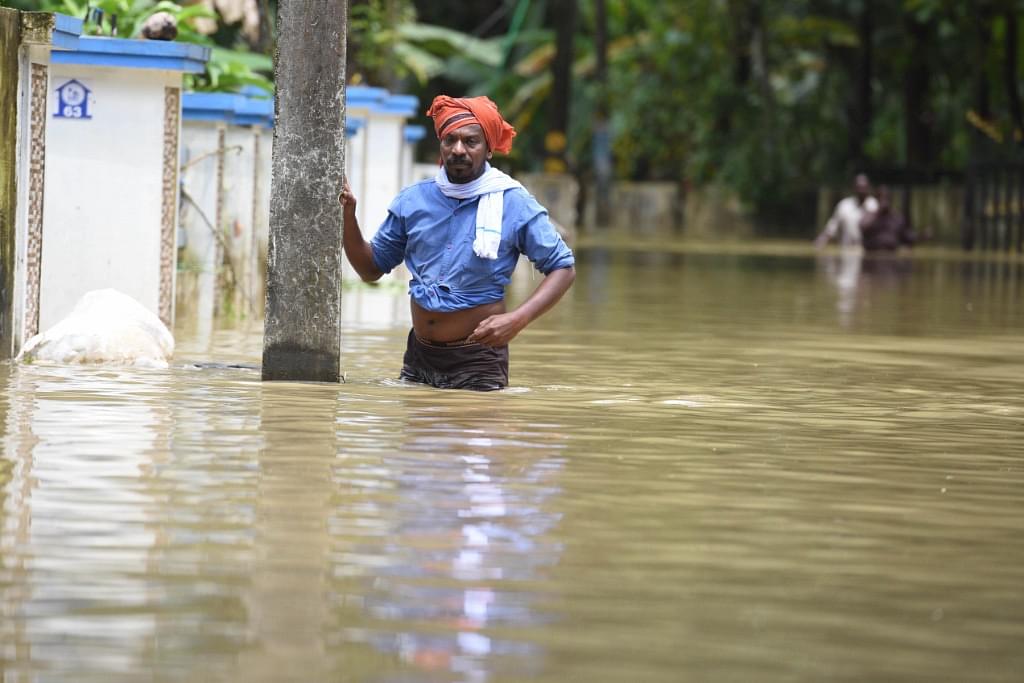 Residents wade through flood water on the outskirts of Chengannur Taluk on August 19, 2018 in Alappuzha (Raj K Raj/Hindustan Times via Getty Images)

From the depths of the floods, the kind of which were not seen for a hundred years, a new Kerala emerges – with a resolve to rebuild.

Every Malayali has heard of “Thonutiumpathile Vellapokkam” (The floods of ‘99), referring to the deluge that submerged Kerala in 1924 CE, the year 1099 in the Malayalam calendar. Whenever it is referred to, Malayalis speak of it with sadness and fear, though most today have only heard stories about it. However, now they have faced a similar calamity. Another great deluge that matches the floods of ‘99 – the floods of ‘94.

Floods are not a new phenomenon in Kerala. The topography of many areas in the state is such that water levels invariably rise knee-high almost every monsoon, and everyone has waded through it at some point. When monsoon reached Kerala on 29 May this year, all indications were that the state would receive a normal south-west monsoon. In fact, a state which experienced deficits in its past two monsoons expected the same to continue.

That was not to be.

Two weeks into the season, it was clear that it was not going to be a normal monsoon: more than 40 were dead and the Idukki dam reservoir reached a record level. By the end of July, the reservoir touched 2,395 feet, prompting the Kerala State Electricity Board (KSEB) to open the shutters of Cheruthoni dam, one of the three dams of the Idukki hydroelectric project. The shutters were being opened after 26 years, when for the first time the reservoir had been filled to capacity during the south-west monsoon, and there was still a month of rains remaining. The situation in the state turned bleaker than before.

In Malayalam calendar, Karkkidakam is the last month of the year, and generally known to be the one in which rains lash the state the hardest. The month is also known as Ramayana Masam, for it is in this month that the Hindu households in Kerala start the customary reading of the Ramayana which finishes by the end of the month. The goal is to retain faith and purpose through the ‘toughest’ month of the year. This time, Karkkidakam did not start with the intensity many expected. However, by the end of the month, the rains had acquired a ferocity that Kerala had not experienced since the floods of ‘99. The Malayalam New Year passed by without much celebration on 17 August, as the Kollavarsham (the Malayalam calendar) entered the year 1194 (2018). Onam passed by without much fanfare too, the floods being the worst calamity to have hit the state in recent times.

On 8 August, the 23rd day of Karkkidakam, the state received 12 inches of rain in 24 hours.

By the time the third week of August went by, it had turned into a week that no Keralite would ever forget. Starting from 15 August, Independence Day, it rained continuously in many parts of central and southern Kerala for three days straight. The shutters of 35 dams were opened, one of the dams on the Chalakkudi river overflowed. Most of the rivers in the state breached their banks, flooding surrounding areas. The Bharatapuzha, Kerala’s iconic river, which is normally sanguine and calm unleashed a fury that was primordial. Many places in the hill districts of Wayanad and Idukki were cut off from the outside world due to landslides. All the districts of Kerala, except for the northern-most district of Kasargod, were under a ‘red alert’. Many towns in central and southern Kerala were flooded. Periyar, the largest river in Kerala, flooded almost all the towns on its downstream. The Aluva town, on the banks of Periyar, was almost submerged. The low-lying areas of Kuttanad in Alappuzha also experienced unprecedented flooding. But no place was so affected as Chengannur town on the banks of Pamba river. Hundreds, if not thousands, were trapped in many localities in the town as flood waters rose rapidly.

The Symbolism Of The Idukki Dam

The story of the Idukki dam is in many ways tied to and reflective of the state and its recent history and struggles. The idea of a dam at the location was first proposed in 1932, when two British engineers, guided by a local tribal chief, Kolumban, arrived at the ‘Kuruvanmala’ and ‘Kurathimala’, the two mountains that straddle the dam. The construction of the dam began in 1969, and when it was completed in 1975, it was the first arch dam in Asia. The dam became a symbol of the aspirations of the small state: to modernise and be self-sufficient. Initially, the first stage of the project was commissioned in 1975, adding a capacity of 390 megawatts to the state grid. In fact, at this time, the state was power surplus, the KSEB was in profit and sold 543 million units of electricity to other states. Contrast this with the current state of affairs: Kerala barely meets 30 per cent of its energy requirements in a year, and the KSEB is deep in the red.

Many more hydroelectric projects and dams have been constructed in the state since then. The mining and quarrying industry has extended their reach deep into the lush forests of the Western Ghats. Undoubtedly, this has had an impact on the ecological system of the state.

The reasons for the flooding are varied and multi-faceted. A variety of factors came together to cause the floods. To assign blame at this stage would serve no purpose. What is required at this point is a proper inquest to identify the causes of the flood and suggest plans to avert such a calamity in the future.

The story of the Kerala floods is that of the resilience of Keralites, of Indians, of humans. The stories of heroism and courage are aplenty, that it would rattle the mind of any cynic. When the town of Chengannur was submerged, it was the fishermen of Kerala who loaded their boats on lorries, took them to the flooded areas and rescued and distributed relief material to those who were trapped. All this, out of their own volition and goodness in their hearts – they came as a huge relief to the National Disaster Relief Force that was stretched too thin. The helicopters of the Indian Navy and the India Air Force – as well as the rescue teams of the Indian Army were an omnipresent sight. The buzzing of the navy helicopters was constant, and it was to many a sound of hope and immense relief.

Youngsters were at the forefront of relief work too. Social media sites and messaging applications – such as Facebook, Instagram, Twitter and WhatsApp became networks for information gathering and sharing. There were many ordinary citizens, who took the time and effort to meet the demands of those who had been displaced. Many raised whatever relief material they could from friends and family to deliver food condiments, medicines and other requirements to those in relief camps. There were many supermarkets, shops and pharmacies that waived their own margin. WhatsApp was awash with details of any requirement that the displaced had.

To many, the daily press conference by Chief Minister Pinarayi Vijayan became the symbol of resolve of the state to overcome this calamity. His conduct during the third week of August was undoubtedly exemplary. There are, of course, those from the left and the right who have attempted to use the calamity to their own advantage; but on the ground, there was no such differentiation, for it was a question of survival. Even the Malayalam media, which is normally criticised for its bias and incongruities, set aside sensationalism for a brief period and attempted to coordinate rescue activity and relief work. The disaster affected everyone equally without bias or favour: young and old, rich and poor across divides of caste and community. For those few weeks, Keralites had one purpose: to endure.

The road ahead for the people of the state is long and arduous. To emerge from the floods misery, much work lies ahead. The dreams and aspirations of many may have been momentarily swept away by the waters, but their resolve has only buoyed. There is a burning desire that one can see in the eyes of those who lost everything: to rebuild and to renew.

Here’s to a new Kerala.