The Left In Self-Destruct Mode 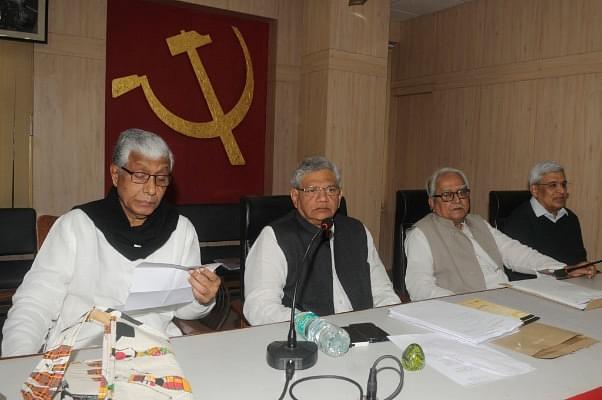 CPI-M leaders seeing the writing on the wall?

In all probability, the Left is likely to be mauled in Kerala and West Bengal in the ongoing Lok Sabha elections, thanks to the rise of the Bharatiya Janata Party (BJP) as a strong third force.

After being ousted by Mamata Banerjee in West Bengal in 2011, and by the BJP in Tripura in 2018, Kerala is the last bastion of the Left. While it is too premature to forecast the impending demise of the Left in India, it is worth analysing the reasons for its sad state now after being a strong force in at least three states, not to speak of some industrial pockets in Maharashtra and Tamil Nadu.

Understanding the rise of the Left

Before we analyse the reasons for the Left’s decline, we need to understand why it even rose in the past. There are three broad reasons why.

First, it was at the forefront of social reform movements in Kerala, including temple entry and upliftment of the Ezhavas, though the latter was more the work of Sree Narayana Guru than the Left.

Second, it implemented agrarian reforms in both Kerala and West Bengal, thus creating a rural base to supplement its urban base in organised labour. In Tripura, the Left provided security and shelter to persecuted Bengalis, who left post-Partition East Pakistan in droves.

And third, it got the Hindu vote by default everywhere. With the Congress choosing minority appeasement post-Partition, the average Hindu naturally saw the Left as an alternative and provided it the numbers to keep winning elections in all three states.

Reasons for the Left’s decline

The Left’s fall from grace is obviously related to its failure to stand for any of the things that brought it to power in three states, and the increasing alienation of the leadership from its essentially Hindu mass base.

The first, and most obvious reason for the Left’s decline is simply that it has no ideas on economics beyond the stuff peddled by Karl Marx and Friedrich Engels. Marx made egregious errors by utilising his rear-view analysis of European history to predict the world’s future. While improving our understanding of the role played by materialism and production techniques in the shaping of societal power relationships, he forgot that man does not live by bread alone. Religion may be the opium of the masses, but so is ideological Marxism. Once basic bread-and-butter issues are behind us, identity matters. But the Left could not see this simple reality and bought into Marxist claptrap lock, stock and barrel.

Marx saw the alienation of workers from their tools in a rapidly industrialising England, and concluded that the interests of workers and capitalists will never be congruent. He failed to see that in a future knowledge economy, the worker carries his tools with him (his intellectual capital, his skills, etc).

Today, capital chases the knowledge worker as much as vice-versa. The other big boo-boos of Marx relate to India and Asia. Without coming anywhere within a hundred miles of this continent, he wrote utter rubbish about the so-called Asiatic mode of production and even defended British colonialism in India. He had no understanding of the underlying plural Hindu ethos. He exhibited a crass Hegelian form of racism that would have shocked modern-day liberals. And his true believers bought into this racism without seeking to question its morality or relevance. Worse, Marx’s ideas led to the rise of mass murderers like Lenin, Stalin, Mao, Pol Pot (Kampuchea) and Enver Hoxha (in Albania), who used his basic ideas of dictatorship of the proletariat to justify their extreme authoritarianism and violence against political rivals.

India’s Left leadership borrowed such bankrupt ideas, and even today Stalin and Mao are their leadership ideals. They love to label their BJP-Sangh rivals as fascists and Nazis, without understanding the irony of hero-worshipping the Left’s own mass murderers. The line separating fascism from communism is a thin one.

The Left in India (from the moderate CPI and CPI-M to the hyper-Left ML and Maoist varieties) learnt nothing from Communism’s worldwide disasters. It went along with the same ideas that failed spectacularly elsewhere. It is often said that the Indian Right lacks quality intellectuals, but the Left has exhibited mind-boggling intellectual bankruptcy despite controlling huge academic resources and institutions.

It could only produce pale copies of Eurocentric ideas (secularism, subaltern history, class ideology), with no modification or adjustment for Indian realities, especially caste. This is one reason why regional parties rose in large parts of India, from Mayawati’s Bahujan Samaj Party to the Yadav parties of Mulayam Singh and Lalu Prasad, not to speak of various other caste-based outfits in the south, especially in Tamil Nadu.

Left is the last bastion of arrogant Brahmanism

Logically, the Left should have been the first to discover the importance of caste identities before coalescing the idea with class, but it simply did not understand the real India. And when true subalterns rose to power, like Narendra Modi, it exhibited the same Brahmanical disdain for him as a traditional casteist upper caste person would have in the past. The Left is the last bastion of arrogant Brahmanism.

Thus, even as the non-Left parties (Congress, BJP, various regional parties) expanded by including the excluded by launching populist schemes, the Left slipped on its exclusivist ideas of class war. Today, both mainstream parties are talking the language of the poor and the excluded, leaving the Left with no purely class-based constituency to rebuild itself on.

The Left is kicking its core Hindu constituency

On the other hand, the Left is busy kicking its core Hindu constituency on the shin and still hoping to remain in power. Nothing illustrates the Left’s low emotional quotient (EQ) than the way the Keralite branch of this deracinated sect betrayed the devotees of Swami Ayyappa in Sabarimala.

In an exceptional temple with its own strong tradition of worshipping the deity in the form of a naisthika brahmachari (eternal celibate), the Left found an issue of gender exclusion. And this when there are over a hundred other (but less known) Ayyappa temples in Kerala itself which do not worship the Lord in this form and hence do not bar women in the 10-50 age group from entry.

If the Left had understood this simple fact of diversity in tradition, it would not have made such a huge blunder. It gave the BJP an opening where it almost had none. The Left had no cojones to take on the mullah-dom that keeps Muslim women in fear of triple talaq, but it unleashed its furies on a tradition where no true woman devotee truly felt excluded by Swami Ayyappa!

Can the Left revive itself?

The question remains: can the Left revive? The answer is yes and no. It is yes, if it waters the roots of its base, essentially the Hindu masses, and reinvents its economic ideology for the twenty-first century, leaving Marx in the dustbin of history. It will be a big no if it does neither.

To start with the economic ideology first. The Left needs a commonsense approach where it rejects dogma and figures out what works in the real world, where both capitalism and communism are seen to be seriously flawed.

The essential economic dilemma is the same in every society: what policies do you follow to generate wealth, and second, what must you additionally do to ensure that the wealth thus created does not accumulate excessively at one end. In short, how do you redistribute wealth without killing the animal spirits that help create it in the first place. Once the Left answers this question honestly, it will have its economic strategy ready.

Second, there is the reality that there can be no nation, no society, without an accepted core identity. India’s core identity is Hindu-Buddhist-Jain-Tribal, and without accepting this as the core of our nationhood, you cannot deliver rights to the other minorities, including their fair share of the economic pie.

A nation at perpetual war over its identity cannot progress, and the deracinated Left, by denying its essential Hindu-ness (we use this term in case the Left does not like the word Hindutva) can never make a comeback. By denying this core identity, the Left is essentially embracing minority communalism by default, when the minorities actually have no love lost for the Left.

The Left’s predicament is no different from the story of Kalidasa, a man who was too busy cutting the branch he was sitting on to notice that he will be the first victim of this foolishness.