The Silent Resentment: In Bengal, Saffron May Just Be The New Green 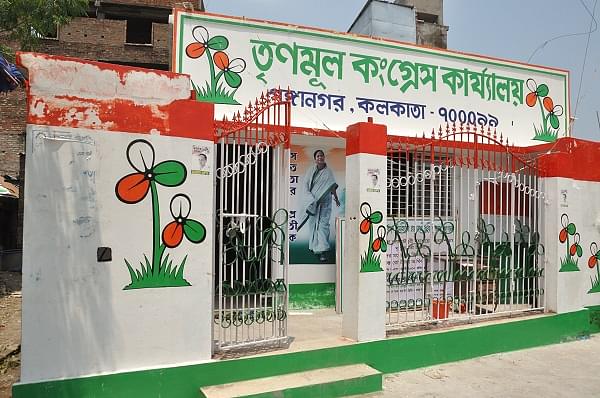 The chorus against Muslim appeasement is turning louder by the day in Bengal.

There is something blowing in the air in Bengal, and it has even taken seasoned politicians of all hues by surprise. It’s running deep and silent, and it’s not quite discernable on the surface. But no one can deny its presence. What’s visible on the ground, and across the state, is a sea of saffron: the saffron of the BJP flags and saffron dhwajas with images of Shri Ram and Hanuman on them. Or just plain saffron flags, triangular and rectangular in shape and in varying sizes.

The full-throated cries of ‘Joi Shri Ram’ that reverberated throughout Bengal during Ram Navami continue to rent the increasingly hot and humid air of Bengal, and please and alarm politicians and others (depending on their political leanings) in equal measure. Bengalis have at last, and truly, taken to mouthing ‘Bharat Mata Ki Jai’ with uninhibited abandon. Bengali youngsters have taken to waving the tricolour and saffron flags, and tying saffron bandanas on their heads or saffron scarves around their necks.

On the face of it, this growing and recent display of nationalism that one witnesses across the state, coupled with the assertion of Hindu identity, can be interpreted as a sign of Hindu consolidation in the face of the blatant minority-appeasement policies followed by Bengal chief minister Mamata Banerjee. But that would be too superficial and simplistic an explanation. There is no doubt that the BJP and its sister organisations have been working hard to consolidate the Hindus and is now benefiting from this wave of Hindu assertiveness and consolidation. However, there is something more to it.

Beneath the saffron cover that people have donned lies a deep undercurrent of anger against the Trinamool and, quite often, against Mamata Banerjee herself. Anger not only over her appeasement of minorities, but also against many other policies pursued by the current dispensation in power in the state. Of them, the throttling of democracy in the state seems to be the most important reason behind Bengal’s masses wielding the saffron shield to protest, and protect themselves against, the Trinamool’s acts.

The 34 years of Left Front rule since 1977 was marked by repression and suppression of the masses. Dissent was dealt with heavily and anti-Left voices were suppressed. The Left created and perpetuated an ecosystem that stifled democracy and contrarian political views. The ruling (left) party apparatchik at the local level would even dictate social behaviour and dictate individual choices. For instance, and especially in the rural and semi-urban areas, local CPI(M) bosses would decide on matrimonial matters and settle family disputes, besides telling people what to do, what to wear and what to read.

Obviously, such a regime could not rule perpetually. A little over a decade ago, people’s anger and resentment started gaining critical mass and this provided a tail wind to Mamata Banerjee and propelled her to pole position in the 2011 Assembly polls. The opportune spark was provided by the Singur and Nandigram agitations, and the masses rallied behind Mamata Banerjee to ultimately vote out the Left.

They rallied behind Mamata Banerjee not because they felt she could turn Bengal into a land of milk and honey, but because they wanted to throw off the yoke of state repression and (Left) party dictatorship that they had suffered for so long. They rallied behind the Trinamool Congress because that party could provide them protection from any retribution (for daring to shift their allegiance) from the Left. They saw in Mamata Banerjee a gutsy woman who could take on the Left.

But the freedom that Bengal’s masses hoped for was very short-lived. Bengal’s long-suffering masses soon realised that the regime they had booted out in 2011 had been replaced by a similar one. In fact, even a worse one. The CPI(M)--and this party is representative of the Left--was, for all its faults, disciplined and structured.

The party’s district committee secretary was the ultimate satrap of the district and all party apparatchik used to scrupulously follow the chain of command. Thus, there was no confusion (among the masses) about whose dictates to follow and who to approach for getting work done or for favours.

The Trinamool, on the other hand, is riven by deep factionalism. Different sets of leaders and factions make competing demands on the masses. The intense rivalry and even animosity among Trinamool leaders and within its ranks--from top to bottom--has deeply and adversely affected all sections of the people of the state.

Along with this, the Trinamool has ushered in the ‘syndicate raj’ (extortion racket aimed at primarily the realty sector) that has driven builders, promoters and even the ordinary man wishing to undertake repairs in his home up the wall. Extortion by different factions within the Trinamool is rife and has angered businessmen and traders.

The Trinamool, in popular perception, has also become a deeply corrupt party. Mamata Banerjee’s image--an honest politician who lives simply in a small tiled-roof hut--has been sullied. The Trinamool, believe people, has been the prime beneficiary of the chit fund scams that rocked the state and deprived lakhs of poor and lower middle class people of their life’s savings.

The sorry images of many Trinamool leaders accepting wads of cash (the Narada sting operation) has got deeply embedded in people’s collective memory. Allegations of Mamata Banerjee’s own family members and her anointed successor (her nephew Abhishek Banerjee) amassing wealth have found resonance among the people of the state.

More than the corruption among the higher ranks of the Trinamool, it is the alleged extortion by the party’s cadres and lower-level leadership that has sparked anger and anguish among the masses. So widespread is this extortion that even petty traders, like a puchka-seller, has to shell out a good part of his meager earnings to local Trinamool leaders.

This, along with the repression and the suppression of dissent, is what has triggered deep anger and antipathy towards the Trinamool. The deep disappointment with the Trinamool, which ascended to power in 2011 riding on a wave of hope--hope for freedom from oppression, hope for clean and good governance, and hope for deliverance from the 34 years of suffering under the Left--has only accentuated the anger against Mamata Banerjee and her party.

The Left had politicised the bureaucracy and the police force. Mamata Banerjee followed in the Left’s footsteps and, today, the lower-level bureaucracy and the police function as extensions of the Trinamool. Thousands of workers and supporters of opposition parties have been arrested on allegedly false, frivolous and trumped-up charges. Many in the bureaucracy are disgruntled, especially since they find it impossible to meet the demands and dictates of competing Trinamool leaders. Officers who want to play by the book are often relegated to unimportant posts.

The Trinamool government’s image has taken a terrible beating in recent years due to the stifling of dissent through various overt means. The frequent subversion of democratic norms, especially during elections, has distressed even the middle class Bengalis. The unabashed use of the police to settle political scores has caused anger and disgust in equal measure.

In towns and villages across Bengal, reports suggest that the police act even in routine matters like accepting FIRs for thefts only after getting clearance from the local Trinamool bosses. Petty bureaucrats wait for clearances from local Trinamool leaders for routine administrative work. Thus, not only are ordinary people affected, but many upright officers and cops harbour deep resentment.

And then there is the blatant appeasement of Muslims by Mamata Banerjee which has had an adverse fallout on the lives of ordinary Hindus, especially in the rural areas. This appeasement has led to growing assertiveness and even aggression by the Muslims. Starting with the Kaliachak riots when riotous Muslim mobs attacked police in Malda to the stone-pelting on Ram Navami processions, this Muslim assertiveness has triggered a Hindu consolidation against the Trinamool.

Even the middle class Bengalis--the Trinamool’s core support base--is extremely distressed over this appeasement. The revision of school textbooks to insert Muslims names in essays, renaming ‘ramdhenu’ (rainbow) to ‘rongdhenu’ since the original Bengali term contains ‘Ram’ and other such steps has led to popular anger.

In the rural and semi-urban areas, crimes and atrocities committed on Hindus by minorities are rarely acted upon. The grant of special favours to Muslims, like monthly doles to imams and muezzins, has angered and anguished Hindus.

Thus, widespread extortion by Trinamool workers and lower-level functionaries, the corruption and feuds within the ranks of the ruling party, stifling of democracy and dissent, high-handedness of and repression by a politicised police force, an unresponsive bureaucracy working on the dictates of the ruling party politicians and appeasement of Muslims has led to a groundswell of resentment against the Trinamool.

The resentment has been building up for the past few years and with the BJP emerging as a strong force that can, in popular perception, take on the Trinamool, Bengal’s masses are rallying behind the saffron party. The saffron dhwaja (and the BJP flag) are being brandished by the people of Bengal to display their anger against the Trinamool. That this is benefiting the BJP politically is just a corollary.