The Utter Hypocrisy Of Leftist Thought 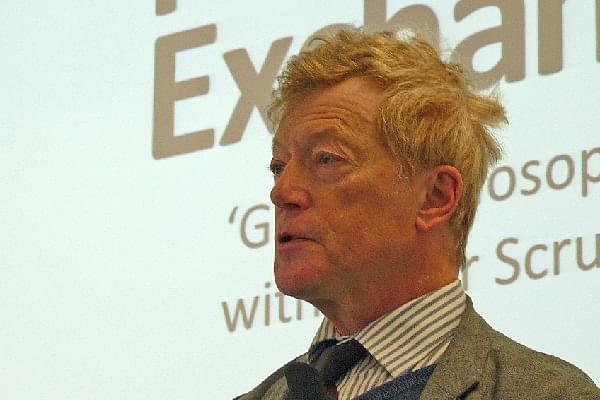 A damning indictment of the lies, delusions and bigotries of leading Western Leftist thinkers, Roger Scruton’s “Fools, frauds and firebrands” is essential reading to understand the “Left”, while determining the role of an Indian “Right”.

The raging firestorm in India ostensibly over “intolerance” with academics, activists, artists and public intellectuals of a certain persuasion at the forefront has been well covered.  The shrill outrage at the alleged subversion of “freedom”, “liberalism”, “the(ir?) idea of India”, “secularism”, “democracy” was even exported to foreign governments and companies through letters and campaigns. The tragedy is, that increasingly, academia around the world and those that are influenced by it is becoming conformist with a particular intellectual high ground view of the world and society couched in “liberty” and “social justice”.  In other words, being politically incorrect and stating uncomfortable points isn’t acceptable. There is no room for context, purpose, understanding, debate and compromise.

Roger Scruton, the seventy-one-year-old old British philosopher, and unusually, right-wing intellectual and academic should know! In 1985 he wrote Thinkers of the New Left that was greeted with “derision and outrage, reviewers falling over each other for the chance to spit on the corpse. Its publication was the beginning of the end for my university career… the sudden loss of status led to attacks on all my writings, whether or not they touched on politics.” His publisher, Longman, under pressure soon withdrew the book.

Post 1989 with the collapse of communism, when “it is now common to accept that not everything said, thought or done in the name of socialism has been intellectually respectable or morally right” with even the British Labour Party dropping clause IV (the commitment to state ownership) from its constitution, Roger Scruton has returned, without mincing words, with an updated book cutting through the “nonsense machine” with the addition of the “mad incantations” of the current intellectual hero of the left, Slovenian Slavoj Zizek (who interestingly holds a position at Birkbeck College where Scruton too taught) who is covered in a new last chapter titled The Kraken Wakes, and the late British historian and supporter of the Soviet Union Eric Hobsbawm whose case  “illustrates just how far you can go in collaborating with crime when the crime is committed by the left.”

While being provocative and direct, Scruton is also prone to almost lyrical flashes when he dismisses Louis Althusser thus “The axioms of Marxist theory appear in Althusser’s prose like blinding flashes of total darkness, within clouds of grey on grey!” and the impact of Sartre on the radical violent revolutionary ambitions of students like Pol Pot. He appreciates Galbraith’s becoming aware – thanks to his 1961 stint as Ambassador to India – that political institutions, not economic ones, determine the character of the country. To his credit, Scruton is also quick to acknowledge the elegance of language and talent as a scholar of the likes of Hobsbawm.

The very idea of “left” and “right” as a single dimension of political opinions isn’t acceptable to Scruton. Yet he uses the word left to describe anarchists, Marxist dogmatists, exuberant nihilists and American style liberals because the thinkers discussed in the book have identified themselves as such and because it is a remnant of an “enduring outlook on the world.”

Scruton challenges the self-view of the left as champions of a new order that will rectify the ancient grievances of the oppressed. The self-view of the left “allows for nothing to stand in its way. No existing custom, institution, law or hierarchy. No tradition, distinction, rule or piety can trump equality if it cannot provide independent credentials. Everything that does not conform to the egalitarian goal must be pulled down and built again and the mere fact that some custom or institution has been handed down and accepted is no argument in its favour. (There is no room, for instance, for understanding Jallikattu and the context of the Sabarimala case).

In this way, “social justice” becomes the barely concealed demand for the clean sweep of history that revolutionaries have always attempted.” The ideas of “liberation” and “social justice” are not compatible any more than liberty and equality are. “If liberation involves the liberation of the individual potential, how do we stop the ambitious, the energetic, the intelligent, the good-looking and the strong from getting ahead?” The left therefore summons old resentments rather than examines what would happen from constraining liberation, and obscures the conflict between them by declaring war on traditional hierarchies and institutions. He shows Marx’s scientific socialism (“laws of historical motion”) to be a utopian joke, its fraudulent claim of being a science where the benefits of legal order exist without law; and social cooperation exist without property rights, and the violence of a totalitarian government therefore required to impose socialist utopias.

He cogently and powerfully makes the case of how language aka Orwellian Newspeak has been appropriated to make “right” a term of abuse and how the intellectual and moral high ground has been occupied by leftist intellectuals. How the human individual has been rendered immaterial by “class struggle”, the only lens through which human interactions are viewed; where abstract “forces” and “classes” and various “isms” collide. Individual aspirations, achievements, ambitions, movements, associations and memberships should, but don’t matter at all.  The role of civil society, institutions and personality (a religious need, Christian in Scruton’s case) are therefore key, in Scruton’s estimation, to preserving liberties and harmony and that is what the Right should work towards.

This is a book that will require careful reading to understand the “Left”, a global force with a largely similar Indian version, while determining the role of an Indian “Right” which has less in common with the Western “Right”.

This piece was published in the February 2016 issue of our magazine.