The World In Her Pocket 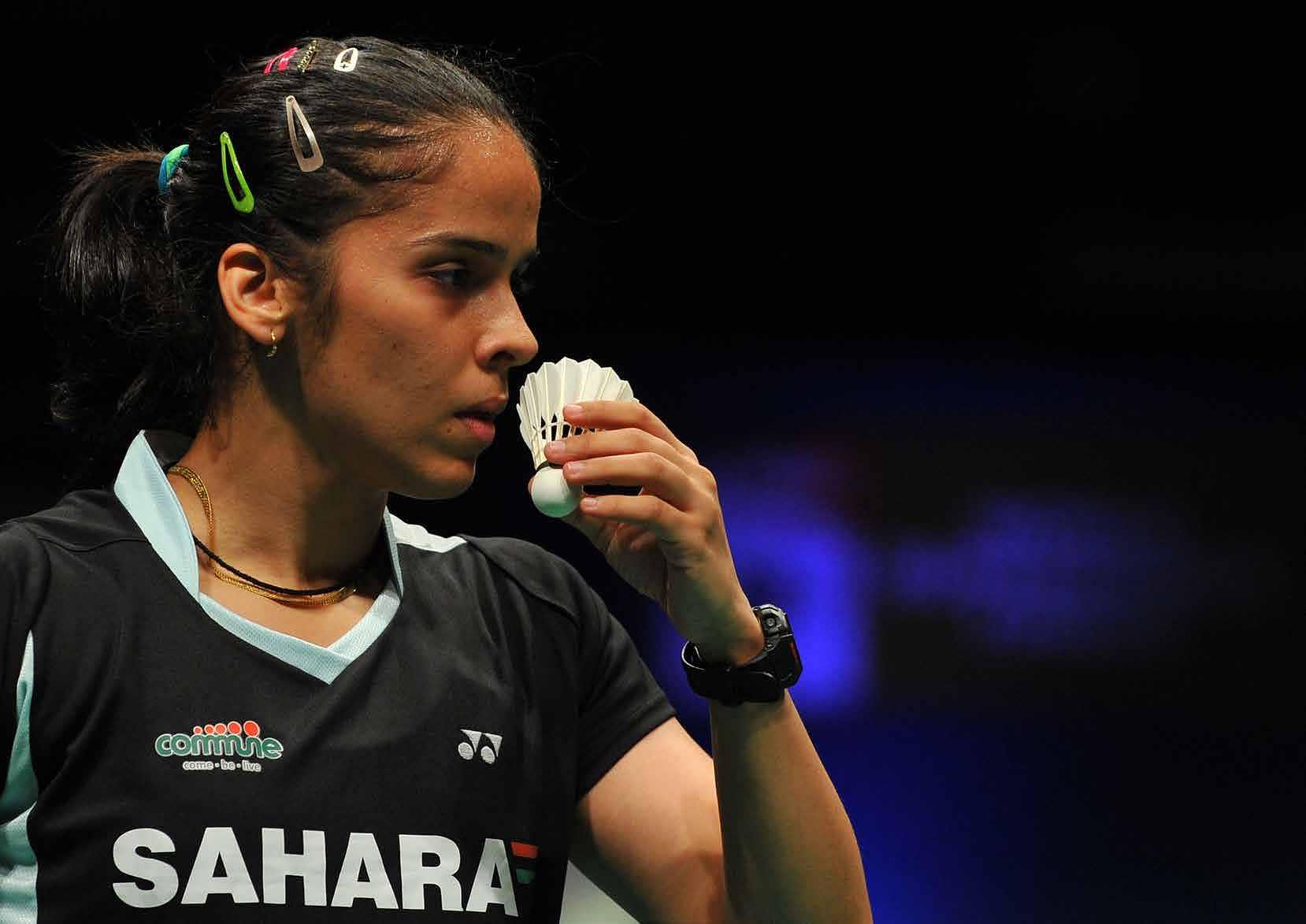 Saina Nehwal is the world No 1 in badminton. Along with Mary Kom and Sania Mirza, she continues the fabulous story of Indian women sportspersons in the 21st century.

Foodies delight in the cuisine offered by Hyderabad. Remarkable is the tenderness, with which the city has preserved its culture. Any mention of the Charminar evokes two associations, one of the monument and the city where it stands, the other, of its diminution into an illustration in red on a pack of cheap cigarettes.

Lost in this crowd of interconnected metaphors is the story of Hyderabad’s contribution to women’s sport in the 21st century. Two among the three most famous names in India come from the city, the third being the Manipuri pugilist Mary Kom, whose twin triumphs of the human spirit and championship-winning performances make for an astonishing story.

Her bronze medal at the 2012 London Summer Olympics transformed her into a pop culture phenomenon. Her autobiography Unbreakable happened not much later. Coincidentally, director Omung Kumar was already working on a film on her. There is something about Mary, agreed actor Priyanka Chopra. She underwent rigorous training to try and become her for the eponymous biopic that released last year.

In 2003, a year after Kom had won her first world championship title, a Mumbai-born girl brought up in Hyderabad suddenly became a sensation in tennis. Using sublime forehand ground strokes and raw power, Sania Mirza rocked and rolled her way into the fourth round of the US Open in 2005, before losing to top seed Maria Sharapova. Her game was error-prone and she didn’t seem to move well enough to be able to beat the best in the business. But her studied nonchalance and natural beauty turned her into a darling of the media and advertisers. She became a star.

But a decade later, it is easy to see that Sania promised more than she delivered in the singles department, which is where the toughest battles are fought. She has three Grand Slam titles in her cupboard, all in mixed doubles. Having quit singles in 2013, Sania is today the third highest ranked player in doubles. Consistency while playing with a partner makes her the third most significant Indian woman sportsperson in the 21st century with Mary Kom a step ahead of her.

Nicknamed Steffi after tennis champion Steffi Graf, Saina took to sports very early in life. Only, she started learning karate and even acquired a brown belt before a particular incident made her move towards badminton. When she was all of eight, she was asked to hold her breath and “take a heavy weight” on her stomach. The weight was of a 90-kg man.

Unable to deal with the pressure, she exhaled, which led to an agonizing stomach ache for several days, she would recollect in Playing to Win, her autobiography. She quit karate, and badminton entered her life. Within a few years,  she would be representing India and win the world under-19 tournament in 2008 (the first Indian ever to achieve this). Seven years later, in the first week of April 2015, Saina is the highest ranked woman badminton player of the world. Second place is also the “first place loser”, golfer Tiger Woods used to say. At the time of writing, Saina possesses what Woods had made his own in golf for more than 500 weeks between 1999 and 2010: the crown of the first place winner.

But then, Saina is no Woods. When the young Spanish talent Carolina Marin who beat her in the All England Open final this year, and China’s Wang Yihan, have arrived at the court against her, they have done so as favourites. In spite of being ranked No 1, Saina knows that triumphant encores against these players will be difficult to earn. Her most significant achievement, one that surpasses all those trophies in her home, is the calmness with which she has resisted Chinese dominance. Those who know the game well are aware that China is to badminton what United States has been to tennis.

In a way, those who play badminton in China are lucky. Countless youngsters do what they wish to do: which is, focus on the game with the government taking care of their expenses. The reservoir of talent, well looked after, gives rise to a string of brilliant players.

In India, Saina’s father had to withdraw money from his provident fund to support his daughter when she was growing up as a badminton player. It was an ordinary middle class household. The money had to come from somewhere. Savings had to be sacrificed. But she repaid his trust, and how.

Young P.V. Sindhu, who also comes from Hyderabad and seems to reserve her best for the Chinese, has emerged as a significant talent in recent years. However, Sindhu can beat the best on a good day, but experience its opposite against a player ranked much lower than her 24 hours later. Saina, on the other hand, can lose to Li Xuerei who’s ranked second at the moment. But she won’t surrender to a player ranked 50th after the latter had drubbed Sindhu, who might have been ranked 40 places higher at that time.

“One medal doesn’t make one a celebrity,” Saina had said in her autobiography. The consistency with which she has been performing lately,  shows that she has learned to attach more value to that thought. Of course, she has experienced her share of injuries and untimely exits, but what makes her stand out is the determination with which she has always come back.

A player’s ranking is calculated on the basis of the top 10 performances in the last 52 weeks. Saina’s ascent has been partly aided by a foot injury to Xuerui, the leader of the pack since December 2012, who has an excellent record against the former. But let there be no doubt about Saina’s brilliant form when Xuerui was forced to take it easy.

She finished as the runner-up at the All England Open, the traditional pinnacle of glory. Her past inability to win the India Open Super Series was an albatross around her neck she would have wanted to get rid of. That she did, by thrashing former world champion Ratchanok Intanon of Thailand in a straight-set win in the finals this year.

Her victory in the China Open Super Series Premier towards the end of 2014 made her the first non-Chinese person to win the tournament, while playing in the country where kings and queens of the game are manufactured on regular basis. These performances propelled her to the top spot in women’s rankings, a critical one step ahead of her previous best in 2010 when she was ranked second in the world.

Having scaled the highest peak which every quality player aspires for, Saina believes that she is now playing the best badminton of her life. Her recent track record seems to suggest she is, although, if she improves even further and holds on to her new acquisition for a long time, her fans certainly won’t mind.

Ranked in the top 10 for the last five years, Saina has been to the Chinese, what the latter have been to her: a constant, irritating threat. She hasn’t had the best of records against everybody in the world; yet, she seems to know that they can be beaten. The Indonesia Super Series Premier, which she has won thrice, has been a happy hunting ground. Hong Kong, Denmark, Australia, Switzerland, Thailand: she has been there, won there.

Trained for a long time by the former All England champion Pullela Gopichand, with whom she parted ways to work with another former player U. Vimal Kumar, Saina’s game reminds us of the man she has respectfully called Gopi Sir all her life.

After returning the shuttlecock to the opponent’s half with a deft placement or a timely smash, she seems to know how to be at the right place at the right time. Easy? Hardly.

Raw power is not her asset. Her class originates from an instinctive awareness of what to do and when. Those who understand the language of her game have also learned to expect a few new words and phrases whenever they play against her.

Seldom do her art and craft go to pieces, when her inspired opponent seems to be running away with the match. But when she makes a point, she occasionally lets it show. A shrill squeak or the clenching of the fist, an expression of a craft person’s joy in the moment, the moment which takes her work one step forward.

Gentle and humble, soft-spoken but at ease with herself, Saina has allowed the makeup man to add a touch of glamour to her before appearing in commercials. On camera, she has shown that she has a charming smile: and wavy hair cascading to her shoulders. But she is where she is because of her gifts as a player that she carefully nurtures.

Maybe, a film on the story of her life will get made someday. But playing her won’t be easy, and training an army of opponents and coaches, among whom will be one Gopi Sir, just as tough. A masterclass act playing a highly competitive sport, who has captured the No 1 ranking in the world: her success story goes way beyond that of any other Indian woman sportsperson.

So what if the 25-year-old is unable to keep the crown for long? So what if she slips a few rungs down the ladder before fighting her way back to reclaim the glory? She will be always known as the girl who once became Queen.

[/level-subscriber]
Having started out as a journalist at 18, Biswadeep Ghosh let go of a promising future as a singer not much later. He hardly steps out of his rented Pune flat where he alternates between writing or pursuing his other interests and and looks after his pet sons Burp and Jack.
Get Swarajya in your inbox everyday. Subscribe here.
Tags: