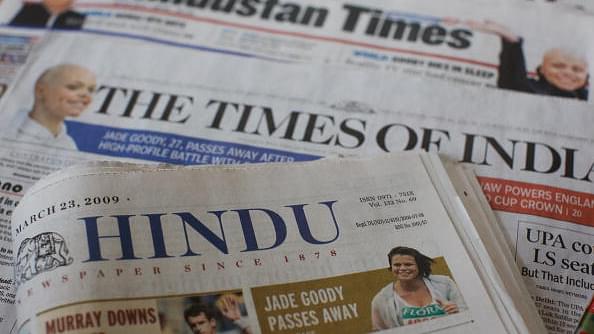 Today, 3 May 2017, is World Press Freedom Day. Many ‘eminent’ journalists of India have tweeted about it, lamenting the fact that India’s ranking for press freedom dropped by three points in 2017. Apparently, India now stands at the 136th position, behind countries like Palestine and Afghanistan. Now, I would treat any ratings that would pit places like Afghanistan and Pakistan ahead of India as highly suspect, but even if the ratings were to be considered true, maybe it is time for the Indian press to introspect and think about why it is being constantly attacked by the people of India.

As per a report in the Indian Express, the agency that gives out the press freedom ratings claims that journalists in India face a threat from “Modi’s nationalism”. First of all, ‘nationalism’ is defined as ‘a feeling of allegiance/loyalty to one's country’. It is a feeling of love and loyalty towards one’s nation, not towards a political leader or a party. By describing the feeling of patriotism of the average Indian as “Modi’s nationalism”, the rating agency, Reporters Without Borders, has exposed its bias, which many Indian journalists seem to echo.

The agency also interprets ‘press’ in India in a very conservative way, including only traditional media like newspapers and electronic media in its definition. Truth is, the term media in India is no longer limited to newspapers or their online versions. It includes a vibrant, if slightly chaotic, world of independently run news websites and blogs and even citizen journalism, practised by millions of independent social media users. The established ‘press’, which is headed by a close-knit group of elite with similar backgrounds and qualifications, however, does not want to let go of its privileges. They are feeling threatened by the relentless assault by new media users. New Media in India is fast emerging as a credible alternative to the traditional mainstream media. In fact, it is the established ‘press’ that has been running a systematic campaign to intimidate and gag the social media voice, by dismissing anyone who is critical of their narrative as ‘trolls’.

It was therefore heartening to see the Prime Minister tweet in support of social media and state categorically that “social media has emerged as an active medium of engagement & has added more vigour to press freedom”. This assertion is exactly what the traditional established ‘press’ in India is afraid of, because it means a challenge to the hegemony of the established ‘press’.

Any disagreement voiced by social media users with the narratives peddled by the mainstream media is dismissed as ‘trolling’, regardless of how civilly or politely it is done. Much has been said about the ‘language’ used by trolls by established journalists. But if one does a rudimentary analysis of the Twitter feed of many of the established journalists, you will find the exact same abuses raining there as you can see in the feed of the alleged trolls. So it is not the language that differentiates the ‘trolls’ from the ‘scribes’. So what does? Well, for most part, it is the ideological slant that separates the ‘journalists’ from the ‘trolls’, as per the journalists. According to journalists working in the mainstream, trolls are typical new media users who dare to have a different opinion from theirs.

The mainstream media believes that it alone should enjoy unfettered freedom of expression. The trend has always been to lie big and retract small. Before the advent of New Media, such lies were allowed to spread unchecked, but now they are caught, often in real time. The problem in India is not of restrictions on press freedom, it is of the restriction the so-called free press imposes on alternative narratives. Facts are deliberately distorted, and politically motivated versions of news are spread by the mainstream media with impunity. When they are countered with facts, they hide behind the fig leaf of ‘freedom of press’.

Even today, as many journalists were paying lip service to ‘press freedom’, the Hindu was merrily peddling a story about an alleged scam in the railway catering services, which was based on an incorrect Right to Information (RTI) reply. Even after the railway ministry clarified with pictures of the invoices, many newspapers and journalists still continue to propagate the false story.

Another sterling example of the misuse of ‘press freedom’ is a story by a news website ‘remembering’ Osama bin Laden on his ‘sixth death anniversary’ by gushing about what a wonderful father and husband he was! These are the same people who demonise all gaurakshaks as ‘terrorists’ because of a couple of stray incidents of violence.

Some weeks ago, India Today reported that external affairs minister Sushma Swaraj had requested the help of Congress member of Parliament Shashi Tharoor in drafting a resolution condemning Kulbhushan Jadhav’s death sentence by Pakistan. The story was taken up by several other publications. Swaraj herself later clarified that the story was “completely false and mischievous” in her tweet. She also said, scathingly, that “There is no dearth of talent in my ministry.” However, despite the minister’s denial, the story was still live on India Today’s website at the time of writing this article.

One of the worst examples of the misuse of ‘press freedom’ was by the Indian Express, when it tried to communalise the issue of uniforms in municipal schools in Ahmedabad. The sensational headline read ‘Divided colours of Ahmedabad: Saffron uniform for Hindu kids, green for Muslim’, making it out like children from the same school were being segregated on the basis of their faith. However, the fine print of the story clarifies that these are two different schools in two different areas of Ahmedabad. One school has orange shirts as uniforms for all students, regardless of their faith, and the other has bluish green shirts as uniforms for all students.

The trouble is, the established ‘press’ in India demands full freedom, minus any accountability. There is no mechanism of self-restraint or regulation, and any move by the government to hold the press accountable is fought tooth and nail as an ‘attempt to curb press freedom’.

If the Indian mainstream media wants unfettered freedom, it also must uphold itself to public scrutiny. There is a difference between reporting facts and presenting views under the guise of facts. The day the mainstream media realises and accepts the fact that there is a difference between news and views, it can claim to be free, regardless of rankings given by any external agency.