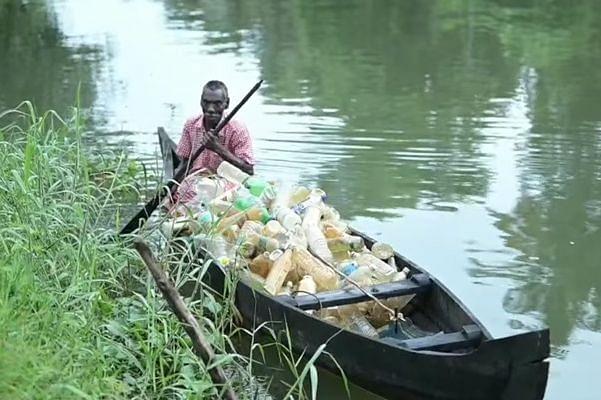 N S Rajappan, the 72-year-old physically-challenged person, hailed by Prime Minister Narendra Modi for his efforts to clean the Vembanad Lake by collecting plastic bottles floating on it in Kerala’s Kottayam district has got a mechanised boat as a gift.

In his “Mann ki Baat” address to the nation on 31 January, Modi lauded Rajappan for his efforts despite being affected by paralysis from the waist down.

“There is a differently-abled person, N S Rajappanji, in Kottayam. Though he is unable to walk as he has been paralysed, his commitment towards cleanliness has not been diluted. For the past several years, he has been taking out his country boat to Vembanad Lake and collecting plastic bottles thrown by visitors. Think, how great is Rajappanji’s thinking! Taking a cue from Rajappanji’s deeds, we must also do whatever is possible to maintain cleanliness,” the Prime Minister said in his address.

Rajappan got afflicted with polio when he was young but has not allowed his physical problems to prevent his noble efforts.

If the 72-year-old hailing from Kaipuzhamoodu in Kottayam district was surprised by Modi’s mention in "Mann Ki Baat", more surprise was in store within 24 hours as the mechanised boat was gifted to him.

Rajappan was given the boat by an expatriate industrialist Sreekumar on 1 February. The boat was handed over to him by Cochin Shipyard director K K Sivasankaran at a function, reported Malayalam daily Mathrubhumi.

Rajappan, who lives with his brother’s family, goes out for a daily round of the lake to collect the plastic bottles since he “can’t stand filth”.

He began collecting plastic waste from the lake 15 years ago as a means of earning a livelihood.

Earlier, he used a rented boat before he was given the one he used until last week by a Malappuram resident.

He had been using the boat for picking the bottles from the inlets of the lake, where they pile up but was on the look out for some help.

Fortunately, the Prime Minister acknowledged his service and the rest, as they say, is history.