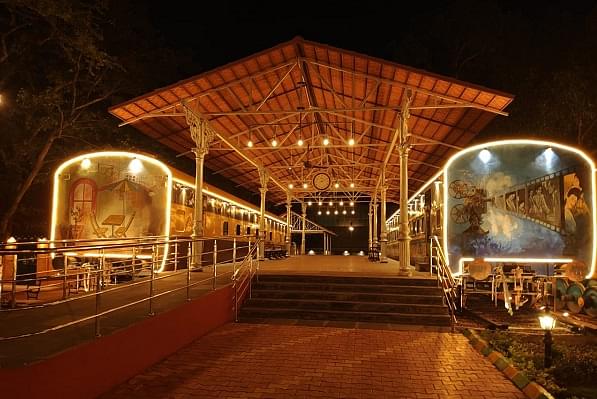 Trains at the Hubbali Rail museum.

Aiming at preserving and portraying the glorious heritage of Indian Railways, a rail museum came into existence near Hubballi station in Karnataka, displaying the gradual evolution of advanced systems in all spheres of growth of the national transporter.

The rail museum, first-of-its-kind in North Karnataka and second in South Western Railway after the historic Mysore Rail Museum, is expected to be a big attraction for both children and adults with its Toy Train, rolling stock of yester years and other heritage items.

Presided over by Railway Minister of State Suresh Angadi, the event was attended by other dignitaries and senior officials.

Centrally located next to the second entry of Hubballi Railway Station on Gadag Road opposite Central Railway Hospital, the museum is set to enthrall visitors with its beautiful surroundings.

Speaking on the occasion, Goyal said, “Railways has an emotional connect with all of us. Railways has played an important role in our lives and has been witness to our personal journeys of life in different phases."

He referred to Mahatma Gandhi and said that Gandhi Ji also preferred to understand India through trains.

"Railways itself has gone through great transformations. The story of the evolution of the Railways from the steam era to the modern bullet trains era is truly remarkable. This museum is a monument of tribute to that extraordinary change. Moving into a post-Covid era would also see many changes. The museum will help in sensitising society to shared history and culture. It will tell us about our roots and our foundations. We must preserve memories and our legacy," he said.

"We are now making Railways fully electrified and 100 per cent green. It will be a world class passenger and freight services organisation. Railways will continue to change and transform. Its legacy will continue to be great and would require to be constantly preserved," Goyal added, and congratulated all the Railway officials for extraordinary work during the lockdown.

He also mentioned that the Railways has pledged to contribute to the USD 5 trillion economy and Atma Nirbhar Bharat mission.

Speaking on the occasion, Joshi said, “This museum is most relevant as Hubballi is an important Railway junction historically as well. This will become another prominent tourist destination in the region.”

Joshi thanked Goyal for the new museum. He also thanked Railways for running 229 special shramik trains from the region.

Joshi also conveyed his thanks to the Indian Railways for undertaking renovation of Hubballi Railway Station.

Addressing the gathering, Angadi said it was a great occasion for the people of Hubballi. He suggested that, in the museum, one coach be portrayed with people wearing masks, and another coach portraying shramiks, as a record of the times.

At Hubballi Museum, the artefacts are broadly arranged in three sections at the two cottages named Malaprabha and Ghataprabha, and the outdoor section.

A grand arch at the entrance welcomes one to a bygone era.

At the outdoor landscape, two narrow gauge locomotives (train engines) are the prime attraction in the museum.

All the exhibits that run on track and are related to tracks, such as engines, coaches, wagons, tankers, permanent way materials like rails, sleepers, level crossing gates, signals et cetera are provided in the galleries set up amidst soothing greenery.

A narrow gauge coach, which depicts “Unity in diversity”, with life-size statues of passengers from various parts of the country is an added attraction.

Two beautiful cottages constructed in 1907 have been converted into two parts of the museum named Malaprabha and Ghataprabha after the two rivers of the region.

The history of locomotives, wagons, and coaches is presented along with antique books and plants.

Glimpses of the working of Railways in medical and security fronts can be seen.

A colourful children's activity room with fun facts is also part of Ghatprabha.

A memorabilia counter, where souvenirs can be bought, and a history corner, where the history of Railway companies is covered, is present in the cottage.

Malaprabha Cottage features a series of beautiful charcoal sketches that constitute an art gallery at the entrance of Malaprabha.

Booking offices with ticket counters, printed tickets, and iron cash chests reflect reminiscences of the ticketing of a few decades back.

A station master's room is simulated with panels, apparatus, registers, furniture and even life-size statues of the station master and a pointsman.

The adjacent room is designed on a theme of a waiting room with antique furniture.

A parcel office set up is also recreated with a 150-year-old parcel weighing machine.

The evolution and progress of permanent way, rails, sleepers, track fitting, telecommunication, electrical items along with time in tune with technology, is illustrated in the museum.

There is a majestic platform with ornate pillars providing access to restaurant cars and theatre cars.

Short movies and videos that are both entertaining and educative are planned to be played at fixed show hours in the coach theatre.

The museum also offers a ride in a toy train which has colourful carriages steered by steam engines that are sure to amuse children and elders alike.

The toy train is manufactured by Hubballi workshop. Boarding and taking a short trip in this toy train that is equipped with sound and steam effects will transport visitors to the vintage era and awaken the child in us.

In order to satiate the taste buds of visitors, Suruchi Cafeteria provided in the museum offers a menu of regional delicacies in aesthetically designed exteriors with antique pillars.

The unique feature of this museum is that everything is being done with available resources by mobilising materials and manpower.

In view of the precautions to be taken in the wake of Covid pandemic, entry for visitors to the museum is restricted to only 30 at a time.

Visitors will be requested to sanitise their hands frequently, compulsorily wear face mask and maintain social distancing when visiting the museum.

The theatre coach will remain closed until complete relaxation of lockdown and return to normalcy.