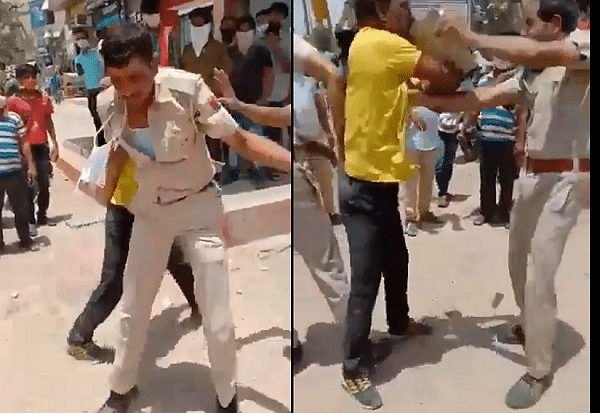 A video from Rajasthan’s Jodhpur district has gone viral on the social media with a claim that it’s ‘India‘s George Floyd moment’. The video shows cops throwing a person on the ground and pressing his neck with their knees.

However, unlike the unfortunate incident in Minneapolis, Minnesota, the cops in Jodhpur reportedly acted after the person, said to be mentally challenged, turned violent after being confronted by the police over not wearing a mask.

Dumb TV media is playing the initial part of this video as 'India's George Flyod moment'. Doesn't matter to them that the same video shows the man beating the cops back badly pic.twitter.com/vGSaON6oii

George Floyd, a 46-year-old black man, died after being arrested by the police outside a shop in Minneapolis in the US. Footage showed a white officer, Derek Chauvin, kneeling on Floyd's neck for several minutes while he was pinned to the floor. He was pronounced dead later in the hospital, triggering widespread protests across the US.

However, in the Jodhpur incident, the man, identifed as Mukesh Kumar Prajapat, did not die but instead started fighting with the policeman.

Jodhpur police officers confirmed that the video was shot in the city on Thursday (4 June) after the police wanted to issue a challan against the man for roaming on the streets without wearing a mask before he started manhandling the police.

Another video of the incident later went viral where the man, when approached by the cops, threatened them by saying, “Aankh phod dunga (I will gouge out your eyeballs)“.

Meanwhile, the SHO of Dev Nagar police station, Somkaran, said that the police were issuing a challan to Prajapat when he attacked them and tore their uniform. An FIR has been lodged against Prajapat on a complaint lodged by the Pratap Nagar police station. He will be produced in the court later in the day.

Prajapat is said to be mentally challenged and had damaged his father's eye earlier for which a case was registered against him, the police said. Action is being initiated against Prajapat under the Epidemic Act, they added.

It should be noted that the case is in stark contrast to the George Floyd case in the United States. While the former complied with the police directive, the latter not only threatened the cops but also got involved in a scuffle with the police. Moreover, in the former case, the person was subjected to assault presumably due to his race, the latter incident bears no such resemblance.