AAP Leader Calls Slain Intelligence Bureau Official ‘Thulla’, Kejriwal Has Used This Derogatory Term Against Delhi Police In The Past 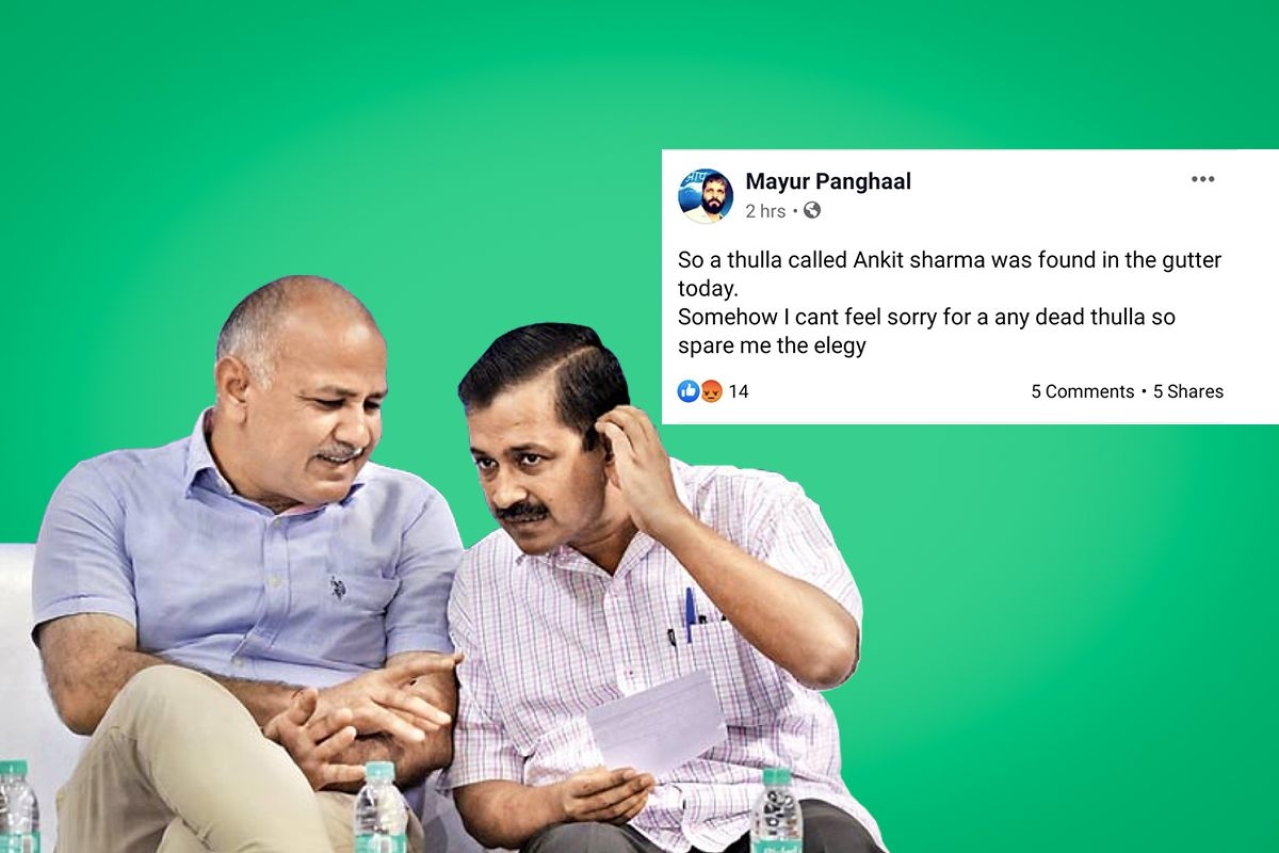 Yesterday (26 February), Aam Aadmi Party (AAP) leader Mayur Panghaal, while commenting on the killing of Intelligence Bureau official Ankit Sharma referred to him as a "thulla" in a Facebook update.

Panghaal said in the post: “So a thulla called Ankit Sharma was found in the gutter today. Somehow I cant feel sorry for any dead thulla so spare me the elegy.”

@ArvindKejriwal @msisodia @AamAadmiParty this is what one of your men has said, you should know. Show us you are different. #ankitsharma we mourn you and each person who died in this insane #DelhiViolence but we stand by @DelhiPolice #Isupportdelhipolice pic.twitter.com/quMMhO1HSB

"Thulla" is a derogatory term used for Delhi police personnel and its use as a pejorative has come to light in recent years.

In a post on the social networking site, the party said:

Delhi Police has been deployed in the riot hit parts of north east Delhi, where anti-Citizenship Amendment Act clashes worsened earlier this week.

Delhi Police head constable Ratan Lal, who hails from Sikar, died on duty during one such clash. This report says that Ratan Lal "died of bullet injuries, his autopsy report has confirmed". His family remains inconsolable.

Shahdara DCP Amit Sharma was critically injured during clashes. He had to undergo surgery for his injuries. He is hospitalised.

His body was recovered from a drain, and his father himself identified the son's body. Unnerving accounts from his mother continue to pour in.

Delhi Police head constable Deepak Dahiya defiantly faced a riotor carrying a pistol during one such clash, without caring for his own safety and life. He only had a lathi in his hand. According to the Times of India, when Dahiya was asked why he confronted the rioter brandishing a gun without adequate protection, he said, “Ye mera kaam hai, karna hi hai (This is my duty and I had to do it)".

Just as Dahiya, several other policemen have been on duty facing stone pelting since the onset of the anti-CAA protests in December last year.

When Kejriwal referred to Delhi Police personnel as "thulla", the then police commissioner B S Bassi had reacted to the unfortunate use of the word. He had called the usage of the term thulla "derogatory" and "obscene". Bassi had called for mutual respect between the different institutions of the state.

Undeterred by the use of the derogatory term "thulla" for them, Delhi Police and the men in khakhi have stood their ground on duty to face worse attacks.

Get Swarajya in your inbox everyday. Subscribe here.
Tags:
896 Shares