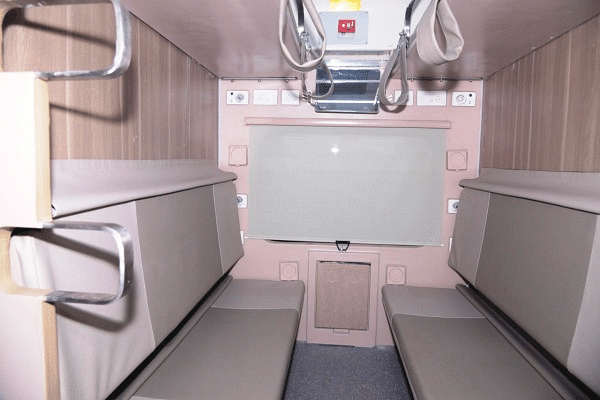 The Indian Railways is set to roll out the much-awaited and all-new "AC Economy" class of train travel, reports Indian Express.

The Railway has already readied and distributed as many as 27 coaches specifically designed for the class among various zonal units for use. These coaches boast of 83 berths instead of the usual 72 berths in the "AC-III" coaches.

The Railway Board is in the process of deciding fares for these coaches in comparison with the AC-III tier. AC-III coaches presently are the entry-level AC travel option for long-distance trains.

In terms of design, the new class of coaches is said to be an upgrade from the non-AC Sleeper and almost on a par with the AC-III tier, with an extra bay added to account for the additional berths.

Despite the added capacity, the passenger comfort has not been compromised and the added space has been created by moving the main electrical control to the coach's underslung.

AC ducting providing individual vents for all berths and modular design of seats and berths to improve comfort, reduced weight, and higher maintainability have also been added in the coach.

The new coach has also improved passenger conveniences in the form of foldable snack tables in both longitudinal and transverse bays, injury-free spaces, and holders for water bottles, mobile phones, and magazines.

Individual reading lights and mobile charging points for each berth have also provided.

Additonally, these coaches built on an LHB livery are capable of running at the speed of 160 kmph. These will permit the Railways to run the trains at 160 kmph on the Golden Quadrilateral. Currently, ICF coaches prevent Railways from running non-premium trains at more than 110 kmph.

This gains significance as the last time an "AC Economy" class was introduced with more berths over a decade ago, the project had turned out a failure. The project had merely inserted more middle berths to maximize occupancy, leading to passenger discomfort and complaints.