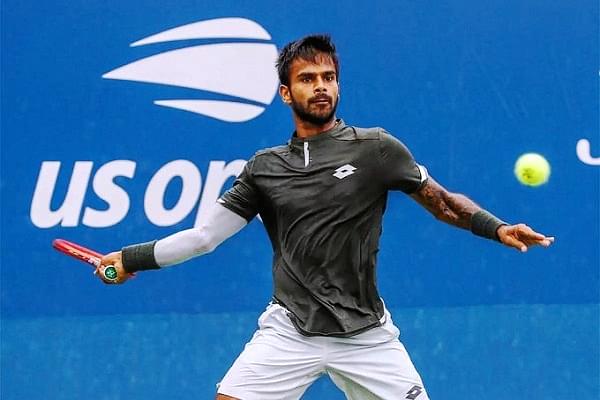 Sumit Nagal in action at the US Open (@DDNewsLive/Twitter)

The 22-year-old rising tennis star from India Sumit Nagal today etched his name in national tennis history after he became the first Indian to win a set against Roger Federer.

Here’s the magical moment for Nagal:

Nagal sent Indian sports fans in a tizzy when he won the first set against Federer 6-4 in the first round of the US Open. The 20 time grand slam winner though came back strongly and took the second and third set 6-1, 6-2.

Nagal ultimately went down fighting in a four setter game by losing the final fourth set 6-4 in a game which lasted for 2 hours and 50 minutes.

While Nagal lost the game, he gave a renewed hope that an Indian tennis player can again make it big on the singles stage.

Born in Haryana’s Jhajjar and aged just 22, Nagal is a young and upcoming tennis talent. The right-handed player considers clay as his favourite surface. Currently ranked 190 in the world, Nagal performed strongly in futures tournaments by winning a total of 10 singles titles including the Bangalore challenger in 2017.

His career highlight was winning the 2015 Wimbledon boys’ doubles title, making him the sixth Indian to win a junior grand slam.

Nagal has credited tennis star Mahesh Bhupati for his rise in the world of tennis. Back in 2008 he was spotted by Bhupati along with 13 other as part of a program to develop India’s future grand slam winners.

Bhupati oversaw his induction in the Indian tennis circuit and Nagal moved to Canada between 2011 and 2014 to hone his skills. He later moved to Germany and currently trains under former player turned coach Mariano Delfino. Bhupati mentors him till date.

Nagal started the year ranked 361 in the world but went from strength to strength to achieve the career high rank of 190. He got a chance to enter the US Open qualifiers based on his strong Challenger performance.

He won the three qualifier rounds to enter the main draw. Subsequently he was paired with a tennis player name Roger Federer. Rather than being disheartened, Nagal expressed elation that he was he was getting a chance to play against the “tennis god”.

“It’s probably the best thing that could have happened. I was hoping I get to play Roger someday. He is God of tennis, so yeah I am looking forward to it”, Nagal was quoted as saying.

But rather than wilt away, Nagal took full advantage of a rusty Federer to win the first set 6-4 which resulted in a wave of excitement among Indian sport lovers.

After the match, Federer praised Nagal for his game and predicted that he is on route to carve out a solid career for himself. Federer lauded Nagal’s consistency and the way he handled the moment.

Hope For The Future

Till date only three Indians (including Nagal) have faced Federer, the other two being Rohan Bopanna and Somdev Devvarman, with the latter battling him twice. Both Bopanna and Devvarman lost to the Swiss in straight sets.

While Indians have been a prominent presence in the doubles circuit, they have in recent years failed to make their presence felt in the much more popular singles game. Currently, there is no Indian in the top 100 with the last player there was Yuki Bhambri, who had achieved a career high ranking of 83 in 2018.

Nagal with his age and temperament is well placed to make himself a prominent name in the men’s singles circuit. But its safe to say, his exploits against Federer has renewed hopes that we might finally have another potential Ramanathan Krishnan or Vijay Amritraj on our hands.