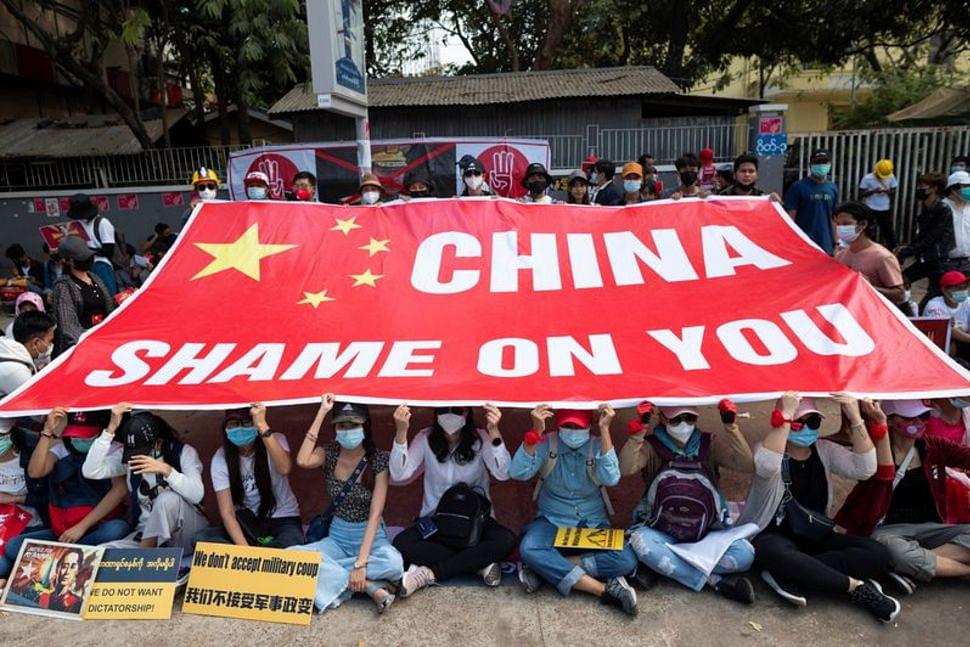 Anti-China sentiment is on the rise in Myanmar, where a large number of people are protesting against the military coup in which State Counsellor Aung San Suu Kyi was deposed by the Tatmadaw and asking for the restoration of democracy.

The protests in Myanmar have taken an anti-China tone as Beijing is seen being supportive of the military coup in February this year.

Those protesting against the military coup have been rallying outside the Chinese embassy in Yangon. Pro-democracy protesters chanted “Shame on you, China” outside the embassy, calling for the complete boycott of Chinese businesses and products in the country to send a message to Beijing.

“Chinese business, Out! Out!,” some protesters chanted.

China has not only been accused of aiding the military but also helping it in censoring the internet and supplying weapons to put down the protests against the coup.

Chinese officials in Myanmar have claimed that Beijing was not aware of the coup before it happened. But the protesters have ignored these arguments, with some raising questions on China’s decision to block the United Nations Security Council from issuing a statement condemning the Tatmadaw.

The anti-China sentiment among protesters has been on the surge in recent days as the military has tried to crush the protests throughout the country.

At least 32 factories in Hlaingthaya industrial zone in Yangon, which have Chinese investments, have been damaged in attacks. Reports say two Chinese citizens were wounded and 240 million yuan (US$37.8 million) lost in property damage.

Trying to control the rising anti-Chin sentiment, the military cracked down on protesters on Sunday (14 March), killing at least 22 protesters in the industrial area after many factories with Chinese investments were set ablaze.

At least 16 people were killed in other parts of the country.

The action taken by the State Administration Council, the title the junta has given itself, has only added fuel to fire in the current situation.

One more factory with Chinese investment was set ablaze after Martial law was imposed in Hlaingthaya and several other districts of Yangon.

Hlaingthaya is one of the largest industrial zones in Yangon and has over 100 medium and large garment factories with Chinese investments.

The imposition of martial law in the region means the military administrators have “full administrative and judicial authority” to deal with the situation.