Are We Looking At $100 Oil? Drone Strikes On Two Major Saudi Arabian Oil Facilities Likely To Half Saudi Crude Production 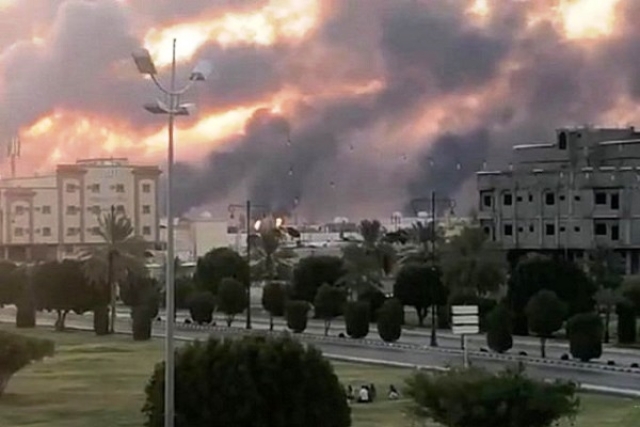 Iran-allied Houthi rebels in Yemen claimed responsibility for the attacks on Abqaiq, a trategic oil processing centre south-west of Saudi Aramco’s headquarters in Dhahran, and the Hijra Khurais oilfield.

The rebels said that 10 drones were used to launch strikes at important facilities in Saudi Arabia’s oil-rich Eastern Province. The rebels have vowed to intensify the range of their attacks on Saudi Arabia, which leads a military coalition battling them in neighbouring Yemen.

The four-year war between a Saudi-led coalition and Houthi rebels in Yemen has been described by the UN as the world’s worst man-made humanitarian crisis.

Houthis briefly took control of Yemen’s capital, San’a, in 2014 during a civil war. They ousted President Abd-Rabbu Mansour Hadi. However a Saudi-led coalition, supported by the United States, the United Arab Emirates and other regional powers, unseated the Houthis and reinstated the regime.

According to Saudi energy minister Prince Abdulaziz bin Salman, the attack could result in production shutdown leading to a loss of about 5.7 million barrels a day which is roughly 5 per cent of the world’s daily production of crude oil. Saudi Arabia supplies over 10 per cent of global crude and is the world’s largest exporter of oil.

Saudi Officials are however hopeful of restoring the production to its regular level of 9.8 million barrels a day by Monday (16 September). The lost production may also be compensated through supplies of oil already at hand.

Saudi Aramco chief executive Amin Nassir confirmed that the fire has been extinguished with no injuries. The oil major is currently working on restoring production levels.

The strikes is the latest in a series of attacks on the Islamic Kingdom’s petroleum assets as geopolitical tensions continue to simmer. among Iran and its proxies like the Houthis, and the US and its partners like Saudi Arabia.

While there was no immediate effect on global oil prices as markets were closed for the weekend across the world, energy experts have warned that the scale of the production disruption has the potential to reverberate through global markets.

The US blamed Iran for these drone attacks. Secretary of State Mike Pompeo blamed Iran for coordinated strikes saying they marked an unprecedented attack on the world’s energy supply.

The attacks on its oil facilities could not have come at a worse time for the company  as it prepares for its upcoming IPO. The company is planning to list in Riyadh stock exchange and could be valued as high as $2 trillion dollars.