In Pictures: As India Spars With China In Ladakh, Indian Army Uses IAF’s Chinooks Capable Of Use In Arunachal 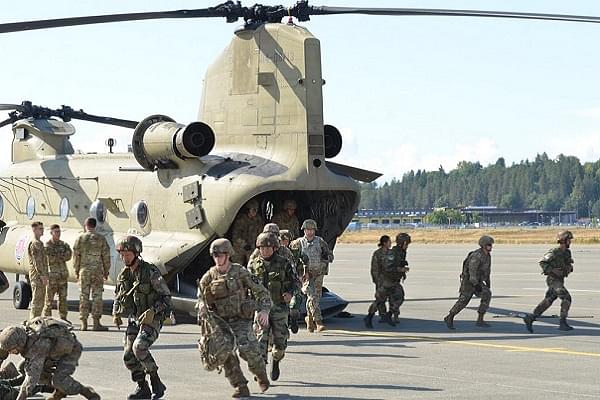 Indian Army has released pictures of its joint exercise with the US Army at the latter’s Joint Base Lewis-McChord in Washington. The Indian and US army were seen using Chinook helicopters in the ongoing exercise.

Here are the pictures from the exercise which were shared by Defence website Livefist:

A video of this exercise was also shared by Livefist.

And hereâs a video: pic.twitter.com/8EumCVwzlw

This exercise assumes significance from the fact that the Chinook helicopters are capable of lifting US made M777 howitzers.

Multiple reports suggest that the M777s will equip the new Mountain Strike Corps being raised by the Army, and the fourth artillery division for deployment along the unresolved northeastern frontier with China.

The light weight of the guns makes their deployment in mountainous areas possible.

Incidentally, this exercise with the US comes at a time when reports have claimed that the soldiers of Indian and Chinese army were involved in a face-off in Ladakh on Wednesday (11 September) morning.

The face-off is said to have happened when Chinese troops are said to have objected to an Indian Army patrol walking alongside the northern bank of Pangong lake in Ladakh.

The Indian Army refused to budge and stood its ground. Tensions were later deescalated following delegation level talks between India and China.

In another unnerving moment for China, India is set to carry out a major exercise HimVijay in Arunachal Pradesh and Assam involving 15,000 troops of newly created Integrated Battle Groups (IBGs).

The exercise will also involve the Panagarh based 17 Mountain Strike Corps. Incidentally, the dates of this exercise are expected to coincide with the proposed visit of Chinese President Xi Jinping.