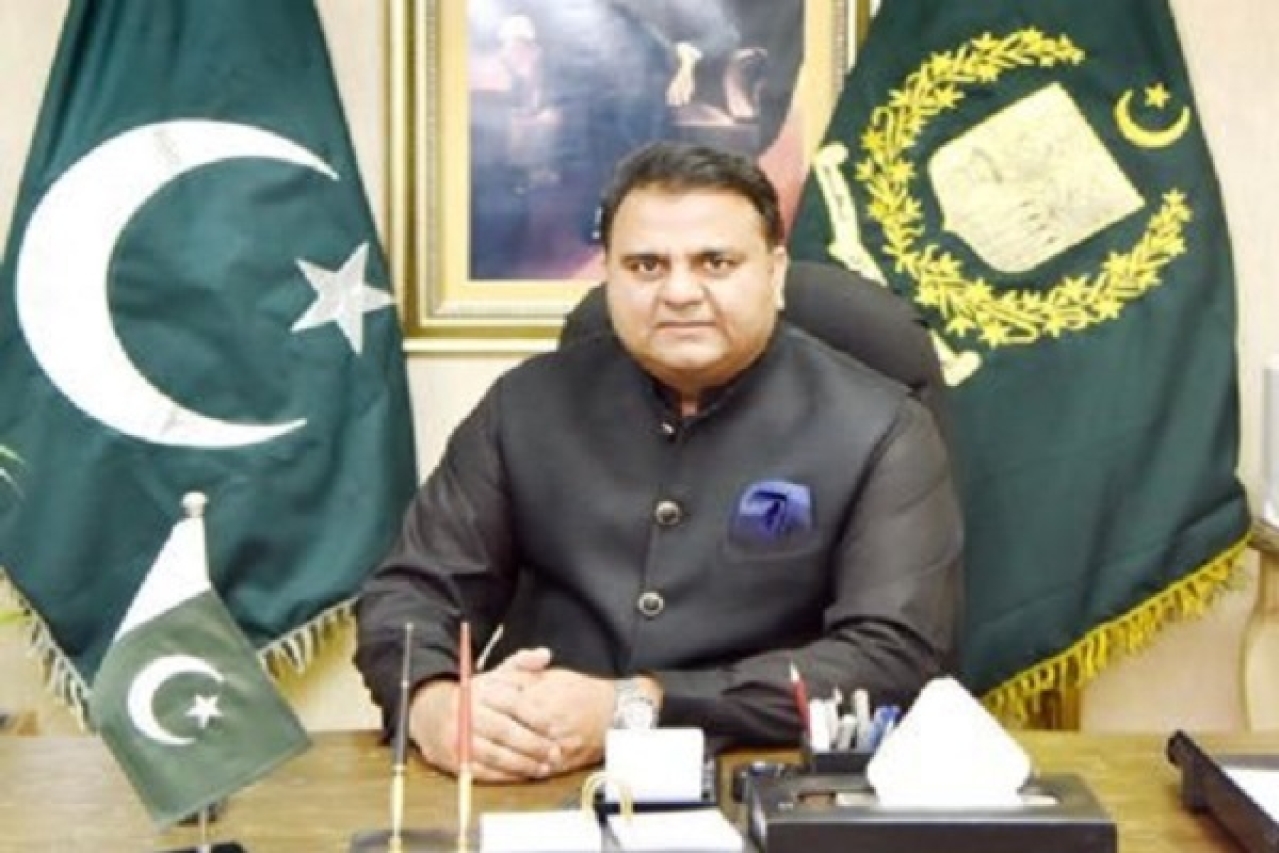 Soon after the abrogation of article 370 in Jammu and Kashmir, top Pakistani leaders took it upon themselves to spread propaganda over Kashmir in an effort to win back the narrative and pressurise India globally.

During the course of this action, various senior Pakistani politicians took help from random Twitter accounts to attack India, either via retweeting them or sharing their content in a bid to spread fake news over Kashmir.

In many cases the leaders spent precious little time in verifying the sources as long as it fulfilled their ultimate objective.

As a result, various Indian satirists and comedians on Twitter sniffed an opportunity and began pranking senior Pakistani politicians by sharing popular pictures and clips from movies and TV shows and passing them on as “suffering Kashmiri youths”.

This soon evolved into even more elaborate pranks, the latest being played on Pakistan’s Science and Technology Minister Fawad Chaudhry, who was recently mocking ISRO over Chandrayaan 2. 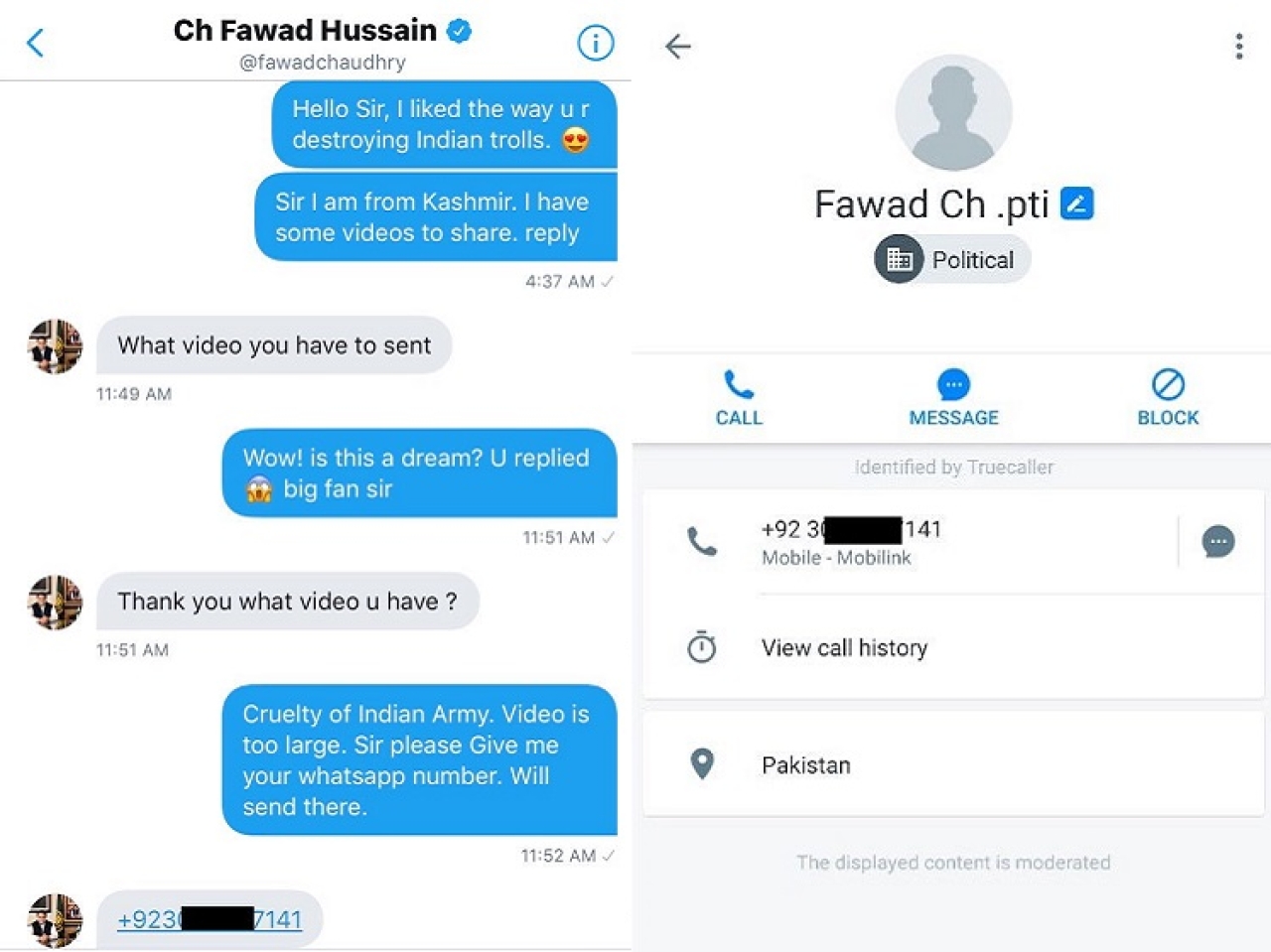 @pokershah managing to get the WhatsApp number of Fawad Choudhry

Today (10 September) he decided to prank Choudhry by claiming that India had pressurised Sri Lankan cricketers to pull out from touring Pakistan by threatening to ban them from playing IPL.

Purportedly this was blindly believed by Chaudhry who then proceeded to tweet it out.

Incidentally, this is not a one off occurance and here are five other times senior Pakistani leaders have fallen for such jokes:

1. The recent trend was started by popular parody account @being_humour who took advantage of the fact that former Pakistan Minister Rehman Malik followed him on Twitter.

@being_humour shared a picture from popular movie Singham to claim Chidambaram being tortured in CBI custody. While posing as a CBI official @being_humour managed to convince Malik about the “authenticity of the image”, who then assured to share it with the UN.

2. Unfortunately for him, Rehman Malik was again at the receiving end when another popular twitter user @theskindoctor13 pranked him by sending him pictures of Game of Thrones characters Arya Stark and Brandon Stark as kids oppressed by the Indian Army.

While Malik was wary of believing “RAW agents”, @thekindoctor13 managed to win his confidence by posing as an ISI operative from Rawalpindi. 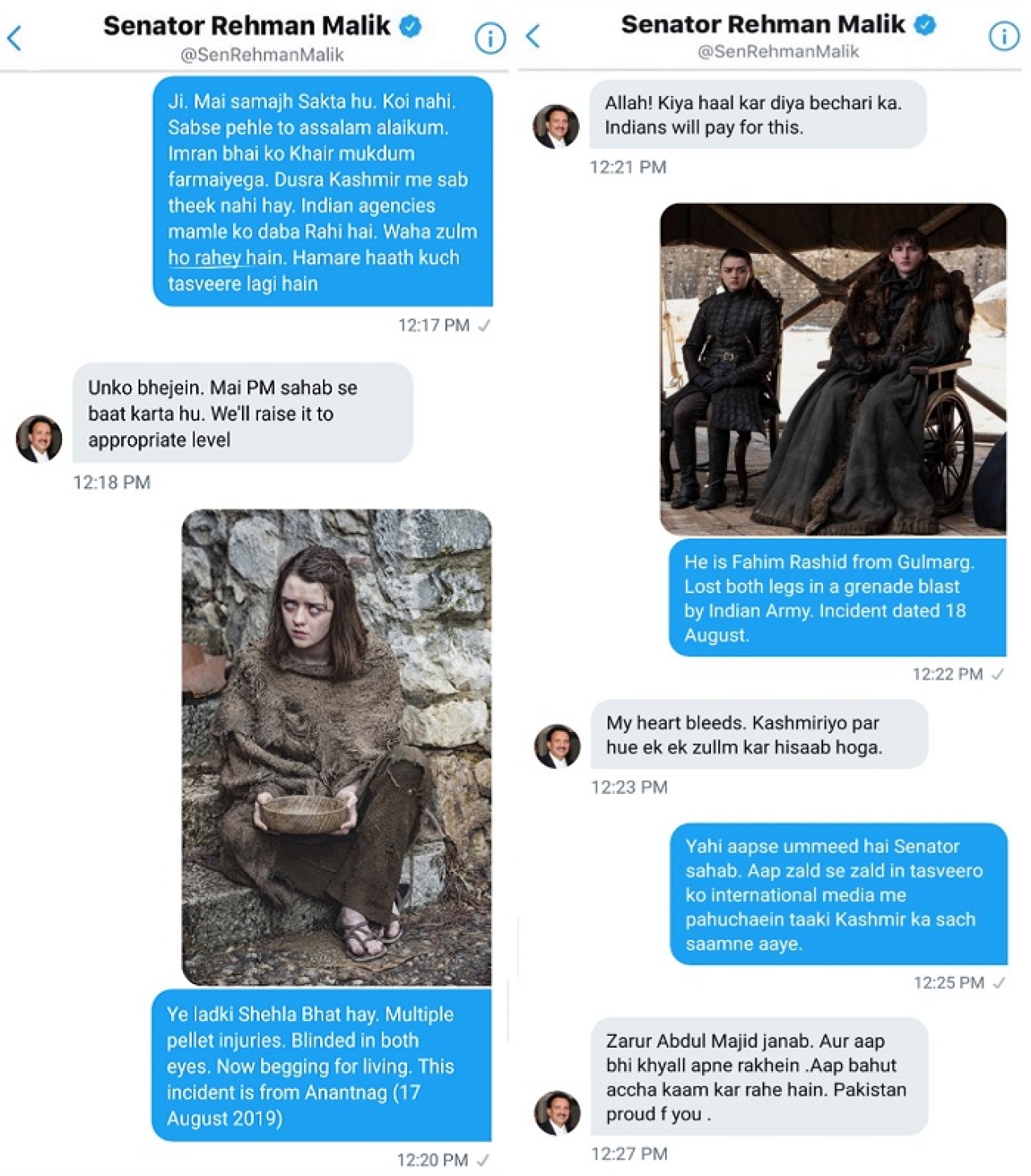 In the above screenshots Malik can be seen lamenting over the brutality against a blinded Shehla Bhat from Anantnag (Arya Stark) and Fahim Rashid from Gulmarg (Brandon Stark) after mistaking them both as the victims of Indian Army.

3. Probably the biggest story in recent days was former high-commissioner to India Abdul Basit mistaking adult film actor Johnny Sins for a Kashmiri youth who lost his eyesight after being hit by pellet guns.

Basit attempted to use a joke describing Sins as “Yousuf from Anantnag” for his Kashmiri propaganda but it badly backfired.

Basit was later trolled by Sins himself who asked him not to worry about his vision and also thanked him for sending twitter followers his way.

4. Serial prankster @theskindoctor13 made Fawad Choudhry his next victim while employing the same modus operendi. In this case the twitter user introduced Hodor as a victim of cold blooded murder at the hands of the Indian Army.

While Choudhry also fell for a different photo of Arya Stark, he creditably managed to recognise Johnny Sins and refused to fall for it. 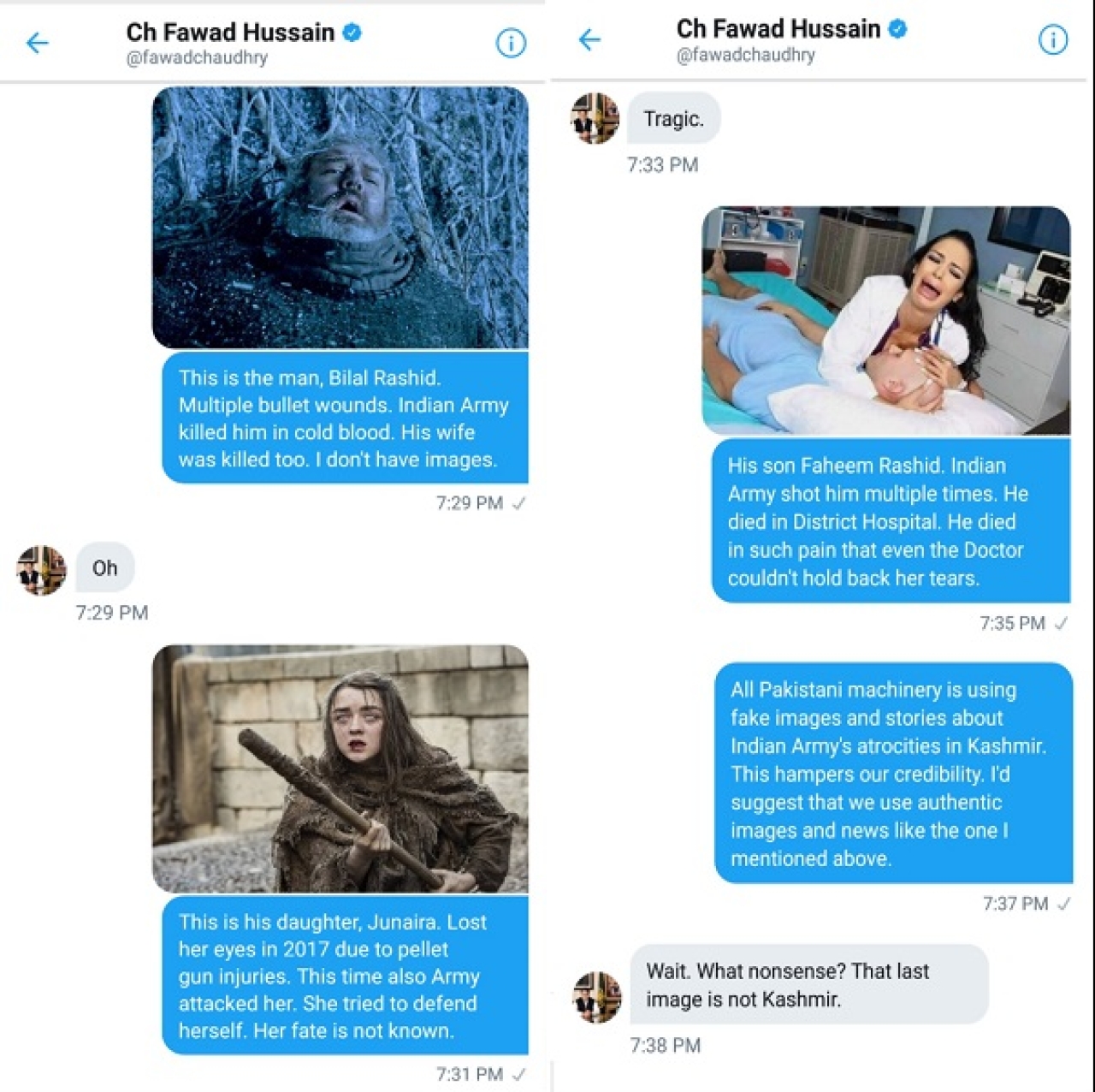 “Narrow escape of an aircraft which could have ended in a great disaster. Miraculous save by the pilot's presence of mind”, tweeted the Pakistani politician while sharing a popular clip from GTA 5.

Hemant is a Senior Sub-Editor at Swarajya. He tweets at @bija_hem