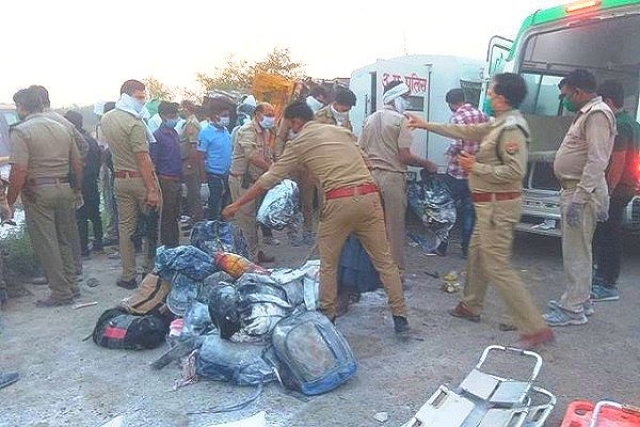 Scene from the accident (Alok Pandey/Twitter)

Last week, 24 migrant labourers returning home from Rajasthan amid the nationwide lockdown were killed and several others injured in a road accident in Auraiya district of Uttar Pradesh. The trailer truck they were travelling in collided with another vehicle.

This month has seen unfortunate accidents involving migrants returning home after facing hardships in their city or town of work during the lockdown.

Many such migrants have criss-crossed across Uttar Pradesh to be in the destination states. Yogi Adityanath administration has been working towards ensuring their safety, well being, and food needs.

The migrants travelling in the truck that met with a collision in Auraiya were headed to Jharkhand, Bihar, and West Bengal as per reports.

Adityanath pressed the administration into rescue operations, shifting the injured and wounded to the hospital and investigations.

Kanpur police have launched an investigation into the allegations by the survivors of the Auraiya accident that they were forced by Rajasthan police to board the truck laden with lime sacks.

This report mentions one of the migrant labourers as saying that the group of migrants had reached Bharatpur (Rajasthan) by bus. He has said that in Bharatpur, they were stopped by the police and told that they cannot proceed.

He has said that when the migrants persuaded, they were allowed to go ahead but without the bus, following which, they were "stuffed" in the truck laden with lime sacks coming from Alwar (Rajasthan). Investigations are on. Statements are being recorded. The Rajasthan police have denied "having put the labourers on the truck."

Yogi Adityanath announced a compensation of "Rs 2 lakhs for families of deceased persons and an amount of Rs 50,000 for the injured."

The accident in Auraiya is one of the biggest human tragedies that have unfolded on the roads amid the return of migrants to their hometowns in different parts of the country.

The Auraiya accident has seen regional politics stepped up. Leaders and parties in opposition to the Bharatiya Janata Party and Adityanath are trying to corner both.

This report mentions that Congress general secretary Priyanka Gandhi Vadra slammed the government "for failing to provide buses to migrant workers who were killed in an accident in Auraiya district and said the government remains 'oblivious' to everything.”

Bahujan Samajwadi Party supremo Mayawati has said that the Congress should send its buses to Punjab and Chandigarh to fetch the stranded migrant workers. She packed her attack on Congress and BJP in her posts on Twitter.

She said that the migrant workers were suffering in BJP-ruled states. She advised Congress to send their buses to Punjab and Chandigarh, instead of UP, to fetch migrant workers who were putting their lives at risk by travelling across the Yamuna river.

Samajwadi Party supremo Akhilesh Yadav, too, has stepped up his attack on the BJP.

The Auraiya accident has led Yogi Adityanath to direct the state administration to take strict measures against prohibited and unsafe travel.