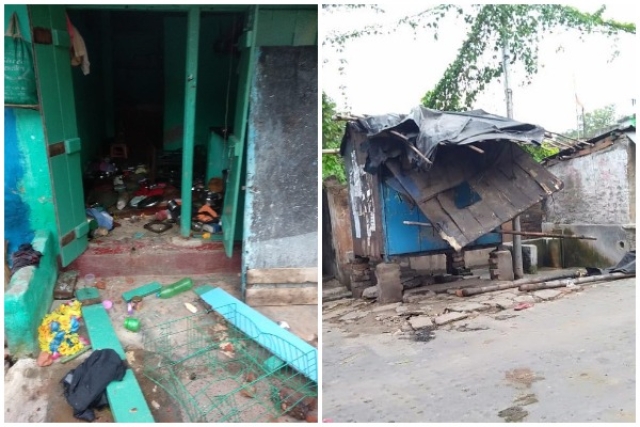 Hooghly Lok Sabha MP Locket Chatterjee has said that the situation there is tense and Hindus fear renewed attacks since the police have not taken any action against the attackers.

According to Chatterjee (see this and this tweet), Muslims of Telinipara, a township off Grand Trunk Road near Chandannagar, were enraged over enforcement of lockdown restrictions by the police. The Muslims of the area were also reportedly angry with police’s attempts to send them to quarantine centres after some people in the densely-populated area tested Covid-19 positive.

Locals say that some Hindu families objected to the flouting of the lockdown restrictions by the Muslims.

That, they say, triggered the attack on Hindu homes and establishments in Telinipara and Chandannagar.

A tweet from BJP Bengal’s official handle charged the ‘vote bank patronised by the Trinamool’ with “holding the state to ransom and flouting Covid guidelines at will without any fear of law”.

BJP state president DIlip Ghosh alleged (see this) that when authorities try to take Muslims to quarantine centres, they vent their anger on hapless Hindus. “Things have taken a communal turn and homes, business establishments and temples belonging to Hindus are being attacked and damaged,” Ghosh said.

The state BJP chief said that law and order has collapsed in Bengal. Hooghly Lok Sabha MP Chatterjee said she has written to the Union Home Ministry providing details of the attacks on Hindus and requested the Centre’s intervention.

Chatterjee said that the Chandannagar Police Commissioner Humayun Kabir had declined to meet her and the police were not allowing her to visit victims of the attacks. She also alleged that the police, instead of picking up the attackers, were arresting innocent Hindus and BJP workers for protesting the attacks on them.

According to some reports, Muslim mobs in Malda’s Harishchandrapur also attacked police and Hindus when the authorities tried to take them to quarantine centres after some people in their localities tested Covid-19 positive.

A few days ago, policemen were attacked and assaulted at Howrah’s Tikiapara (see this) for trying to enforce lockdown.