Bengaluru: Karnataka HC 'Shocked' By Unveiling Of Shiva Statue Covered With Tarpaulin After Protests By Environmentalists 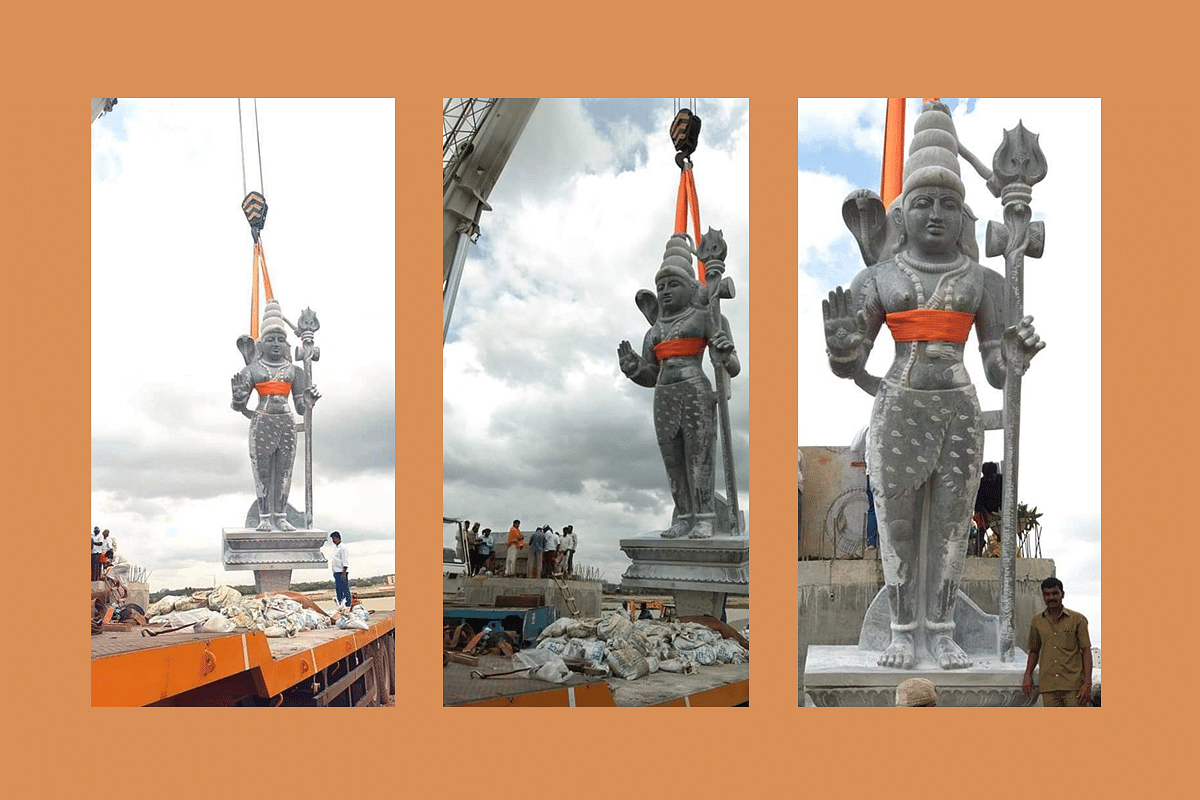 Shiva statue that was erected by the BBMP.

The Karnataka High Court expressed its "shock" at the unveiling of a Shiva statue that was installed on an island in Benguluru's Begur area, violating the court's 2019 orders.

The court ordered the City Police Commissioner to personally "look into the matter and initiate action in accordance with the law".

The statue in question was installed by Bruhat Bengaluru Mahanagara Palika (BBMP) and is part of larger redesigning of the lake area in Begur, the history of which can be traced to the Chola era.

It had stayed veiled in tarpaulin after environmentalists objected to the revamp of the lake in 2019.

On Wednesday (11 August), some activists said to be belonging to Rashtra Rakshana Pade (RRP) took the cover off the statue, inviting a complaint from the BBMP on grounds of trespassing.

The 40-feet statue that had been procured from Mahabalipuram was installed in 2019 at one of the three islands that were being created by the BBMP. It was planned as an effort to revamp the region and reclaim the heritage sites with 'rajagopuras on all four sides', a jetty, and two other islands with fruit bearing trees for birds.

As then reported, the 137.24 acre lake had been desilted at a cost of Rs 10 crore that was funded by the BBMP while the statue was built on funds raised from donors.

The work had been halted since 2019 after environmentalists raised objection to the reduction of lake area, and with the court declaring the creation of artificial islands in Bengaluru's Begur lake as illegal.

While the BBMP responded saying the cover was back on the statue and the saffron flags hoisted by the activists had been removed, the court termed the incident "sheer lawlessness" and instructed the state government to file a report of action taken to post requisite police force around the lake.

As reported by Live Law, the court in its order noted that its earlier interim orders dated 30 August 2019, 17 September 2019 and 22 February 2021, "in no certain terms prohibit the said activity".

The court also added that if anyone was aggrieved by the orders passed by it, he could avail statutory remedies and "challenged them or applied to the court for intervention seeking to modify the orders".

It also clarified that its orders are to "ensure that existing lakes within the city are protected and lakes which have disappeared over the passage of time are restored and rejuvenated".

The court issued the order in response to a memo filed before it which states that, among others, a video published on Facebook by Puneeth Kerehalli with the caption that warns Hindus of a conspiracy by Christian missionaries to remove Shiva statue.

Former BBMP member and Begur Corporator Anjanappa M Begur condemned the attempts to unveil the statue and the other Facebook posts mentioned in the memo which talk of conversions in the area that have brought about a demographic change. Begur called the posts, by various Hindu forums that talk of a 75 per cent conversion to Christianity, a display of their perversion and an attempt to rake up communal differences by spreading false news.

The court clarified that the issue is not religious but a legal one that seeks to know whether an island can be created in the middle of a lake. The state government is required to file its report by 17 August, and the matter will next be heard on 18 August.