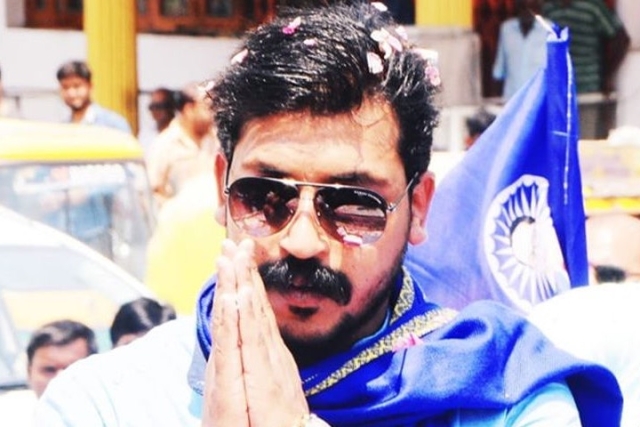 The Dalit leader said: "The farmers have been fighting for their rights in this cold. These laws should be withdrawn immediately."

Riding tractors and trolleys, farmers from Uttar Pradesh and Uttarakhand have joined the farmer protests.

Reportedly, Chilla border, which is a key route connecting UP and Delhi has been closed for daily commuters.

Azad, who was in the news for joining protests against the Hathras gangrape case, and earlier this year, in protests held against the CAA, is the latest entrant in the farmers' protests.

Farmers groups led by the Bharatiya Kisan Union (BKU) have been protesting at the Delhi-UP border.

The BKU has consolidated support from farmers across several districts in west UP, and has held sit-in protests in western Uttar Pradesh against the new agriculture laws passed by the Centre.

From Uttarakhand, farmers led by Terai Kisan Sangathan, who were moving towards Delhi, were reportedly stopped by the UP government in Rampur.

A post on Facebook mentions that the farmers from Udham Singh Nagar in Uttarakhand were stopped on the Nainital-Delhi road on UP-Uttarakhand border.

Thousands of protesting farmers, led by Terai Kisan Sangathan, moving towards Delhi stopped by UP govt on Nainital Delhi road,at Flora Hotel on UP - Uttarakhand border.

This report mentions that these farmers, who were joined by local farmers from UP have started "an indefinite sit-in protest at Rampur national highway and blocked traffic for some time."

"The Uttar Pradesh police had deployed heavy force on the Rampur highway to prevent farmers from reaching Delhi. When the UP police didn’t allow the farmers, despite several efforts, they started to sit near the barricade on the highway."

A protest by "communist party workers" under the banner of Akhil Bharatiya Kisan Sabha in Dehradun was held. The protestors said that they support the farmer protests taking place in and around Delhi.

He has said that pro-Khalistan and pro-Pakistan slogans were proof of it. He has also targeted Congress, accusing the party of instigating the farmers’ protest to “incite riots.”

Gautam has been quoted as saying: “There are Congress workers in the protest and not farmers.

They are doing so to incite riots as it is the party that evolved after the 1947 riots and then made its government after the 1984 anti-Sikh riots. Now also it wants to do the same as it feeds on riots.”

Gautam added that the new farm laws are "for the development of the farmers," and for increasing farmer income, freeing them from the clutches of middlemen.

He added, "We will never go against the farmers as they are our brothers. It was our government which solved the issue of urea supply and procured maximum produce at MSP in Punjab..."