Big Bang Diwali? How Many Of The NDA-Governed States Have Restrictions On Crackers And What They Are, Find Out Here 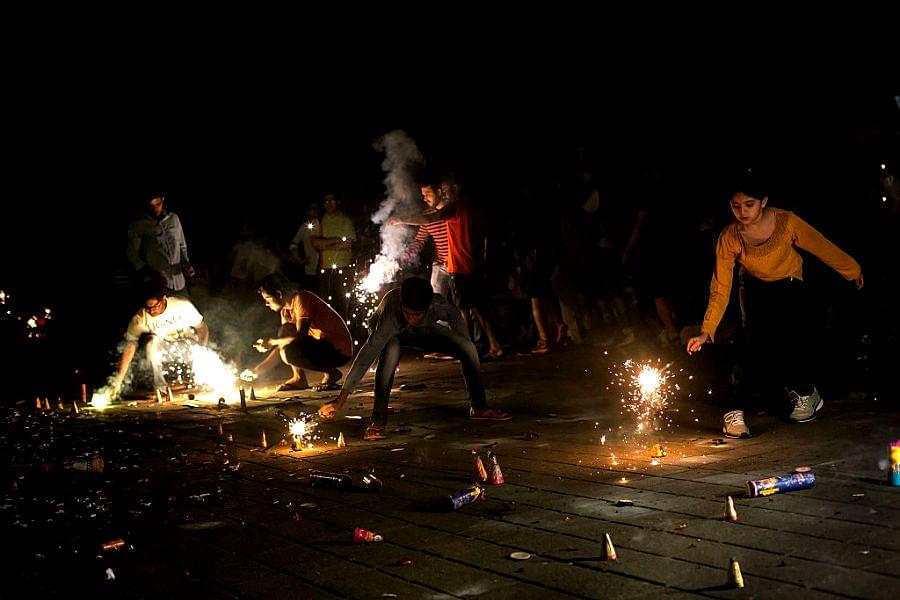 Several states have partially banned bursting firecrackers. Most have allowed the sale and bursting of green crackers or eco-friendly crackers as they cause less pollution.

How do the NDA governments fare on that count? We saw the fireworks show in Ayodhya last night and also Madhya Pradesh CM Shivraj Singh Chouhan lighting a cracker a couple of days back.

What then is the state of firecracker regulations in some of the states governed by BJP and its allies?

Ahead of Diwali, the state pollution control board put a complete ban on the sale and bursting of all firecrackers except the green ones. As per the order, the people can burst green crackers during a two-hour window on Diwali. However, three days after the order, Chief Minister Himanta Biswa Sarma tweeted that the directive was passed without consulting with the state government and it will be reviewed keeping in mind the people's sentiments.

Even as Health Minister of the state last year, Sarma had said that the state had not planned any restrictions on firecrackers, and that "Like any other religion, Hindus have the right to celebrate festivals".

As per a Gujarat government order, licensed shopkeepers are allowed to sell fire crackers even as there is prohibition on their sale/purchase through e-commerce websites. Crackers can be burst between 8pm to 10pm on Diwali and other festivals.

The order stated, “The Supreme Court has given permission for production and sale of only green or approved crackers that have less omission. Apart from such crackers, all others have been banned by the SC including series crackers and joint firecrackers as they amount to greater air and sound pollution.”

Like Rajasthan, the UP government banned the sale and use of firecrackers in the National Capital Region (NCR). It also banned it in other areas where the air quality is in the 'poor' category.

However, the order issued by the UP Home Department allowed the use of green firecrackers in areas where air quality is 'moderate' or better for a period of two hours on Diwali.

During Christmas and New Year, this window would be even shorter and green crackers can only be used between 11:55pm - 12:30am only where air quality is 'moderate' or lower.

The Uttarakhand government has permitted the sale of green crackers in Dehradun, Haridwar, Rishikesh, Haldwani, Rudrapur and Kashipur. Crackers in the state can be burst for two hours on Diwali, Gurpurab and Chhath.

While the state government has fixed a time slot of 8pm to 10pm on Diwali and Gurpurab during which the crackers can be burst, green crackers can be used from 6 am till 8 am on Chhath.

The Karnataka government has allowed green crackers during Diwali. These can be bought through sellers who have taken necessary permits from concerned departments and authorities.

Firecrackers can be burst in the state between 8pm and 10pm on Diwali. During Chhath, they can be burst from 6am to 8am. On Christmas and New Year Day, people can burst crackers from 11.55pm to 12.30am.

However, there is a complete ban on the sale and use of firecrackers in Patna, Gaya, Vaishali and Muzaffarpur. In other towns, only green firecrackers are allowed.

In the state, National Green Tribunal banned the firecrackers. However, people in areas with low Air Quality Index (AQI) can burst green crackers for two hours on Diwali.

Green crackers are allowed in Haryana for community bursting (by large groups in designated open spots) in the areas where ambient air quality is ‘moderate’ or better.

Restrictions have been imposed in other parts as per the order of the State Disaster Management Authority. For weddings and other occasions, only green crackers are permitted.

Bursting of green firecrackers is allowed in the state between 8pm to 10pm on Diwali on 4 November, from 4am to 5am and 9pm to 10pm on Gurupurab on 19 November, and from 11.55pm to 12.30pm on Christmas and New Year.

Almost all the states have the 8 pm-10pm window for when bursting crackers is allowed. All restrictions and regulations aside, the true intent of a state administration for allowing Diwali festivities will be gauged based on how strictly this time regulation is enforced.