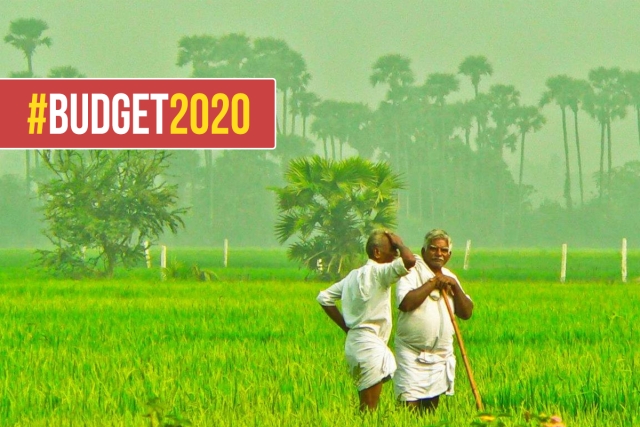 The Budget this time has focussed substantively on the farmer.

Union Finance Minister Nirmala Sitharaman has set her eyes on rural development and transformation as part of the government’s efforts to meet the demands of “aspirational India”.

Presenting her second Budget in Parliament today, the Finance Minister looks to rural India to revive and boost the country’s economy. That’s why she has come up with a 16-point action plan primarily aimed at boosting farmers’ income.

This time, the government’s focus has turned to the other unsung sectors of agriculture such as horticulture, fisheries, dairying and animal husbandry.

The Finance Minister has been wise to look at expanding the use of renewable energy sources by farmers under Pradhan Mantri Kisan Urja Suraksha Evam Utthan Mahabhiyan (PM KUSUM) Scheme.

The Budget will help 20 lakh farmers set up standalone solar pumps, while the grid-connected pump sets of another 15 lakh will be solarised.

More importantly, farmers can generate solar power in their fallow and barren lands and sell it to the grid. There are twin gains from this.

One, farmers will no longer be dependent on fossil fuels such as diesel to run their pumpsets. Two, this will also cut the demand for fuels and thus result in considerable savings in the foreign exchange spent on importing petroleum products.

Efforts to help 100 water-stressed districts in the country is another welcome initiative as also the balanced use of fertilizers, including organic and innovative ones.

Sitharaman has sent a clear signal on improving and modernising foodgrain storages in the country by coming forward to provide viability gap funding on the public-private partnership (PPP) model.

Importantly, the government wants to set up storages at the block level, while envisaging to tap self-help groups to run a village storage scheme.

What could come as a boost for the storage proposal is the move to integrate negotiable warehousing receipts, which these storage houses can provide, and the National Agricultural Market (e-NAM).

This will improve trading on e-NAM.

The Finance Minister is again looking at the PPP model to come up with a seamless national cold supply chain for perishable including milk and meat.

This will lead to operation of Kisan rail, while freight and express trains will now have refrigerated coaches to transport the perishables. Also, the government is planning to tap the civil aviation sector to help transport farmers produce quickly to the consumer.

Horticulture has been an unsung sector of Indian agriculture. The plan to support states with “one product, one district” is welcome in that a district will now entirely focus on getting the maximum gain from a single agricultural product, including tapping export potential.

While there is other routine stuff such as higher allocation or credit facilities in the Budget, the Modi government continues its focus on the fisheries sector after setting up a Department of Fisheries last year.

The Centre is looking to tap its seafood and aquaculture potential by looking to increase fish production and promoting seaweed and cage culture.

The move to set up Fish Farmer Producer Organisation is welcome as it will give the fishermen more bargaining power.

The focus on animal husbandry sector to wipe out the foot and mouth disease and other diseases besides increasing the coverage of artificial insemination are good initiatives.

The target to double milk processing capacity to over 100 million tonnes will help the dairy sector look at more value-addition.

The Finance Minister has come up with some good measures to boost the rural economy in the long run. And probably, that is why the government has set an ambitious 10 per cent GDP growth target.