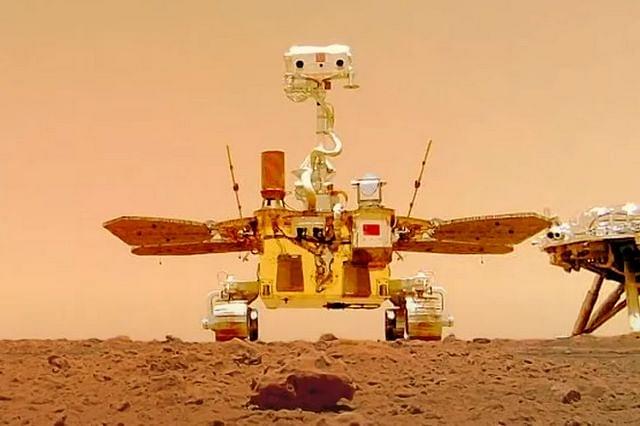 China's Tianwen-1 probe landed on the surface of Mars in May 2021, making it only the third country to accomplish this milestone. Its first interplanetary rover, dubbed Zhurong, was also on board and the same can be seen and heard when it was moving on the red planet in recently released recordings. The deployment of a supersonic disk-gap-band parachute, separation of the backshell, powered descent and a hazard-avoidance hover phase are all recorded during the entry, descent, as well as landing.

China's Tianwen-1 mission launched to Mars in July 2020 and entered Mars orbit on 10 February. Later, it landed on Utopia Planitia, a plain in the planet's northern hemisphere. Before rolling down to the dusty surface to begin its adventures, the Zhurong rover stayed atop the lander module for about a week examining its surroundings and verifying its instruments. The China National Space Administration's (CNSA) recordings, which were aired by Chinese broadcaster CCTV, shed additional light on the rover's first days on the red planet.

The first audio captured by a Chinese Mars rover, which used onboard recording equipment, includes Martian winds and the robot's machinations as it descended to the surface. The first visuals of the Zhurong in action can be seen in a separate recording, which shows the rover making its initial footprints across Mars. The audio and video were recorded on 22 May when the six-wheeled, solar-powered Zhurong drove down from the landing platform. Since then, the rover has been operating on the red planet for 42 days, travelling a total distance of 236 metre (774 feet). After the United States, China is now only the second country to have a rover operating on Mars. In 1971, the Soviet Union deployed two rovers to the planet, but both of them crashed, and communications were terminated after only 20 seconds.

However, the Chinese rover will examine Mars using cameras, a subsurface radar, a magnetic field detector, as well as other scientific instruments, while it is estimated that Zhurong will live for 90 days. A laser-induced breakdown spectroscopy sensor for analysing surface elements and minerals, panoramic and multispectral imagers, a climate station, magnetometer, and ground-penetrating radar are among Zhurong's six science packages.

Jia Yang, the deputy chief designer of the Tianwen-1 Mars probe, told CCTV: "Zhurong rover is more independent in its driving on Mars [compared with China's Yutu lunar rovers]. It can judge by itself whether there is a path ahead based on its own image analysis. It will make a judgment about everyone meter in its driving and move towards the target set by the ground".

The objective of the rover is to return data on prospective water-ice deposits, weather, geography and geology, in addition to studies conducted by other space agencies' missions. Such information will specifically help the country to prepare for the future manned mission as it is planning to put humans on the planet by 2033. Recently reports claimed that Chinese astronauts could be sent to Mars to construct a base that will help the space agency in future expeditions, as well as harvesting resources from the red planet.