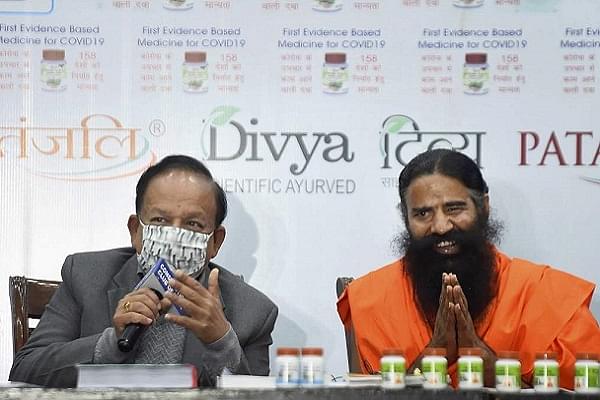 This statement came after a controversy over Union Health Minister Dr Harsh Vardhan and Union Minister Nitin Gadkari attending a 19 February event in Delhi in which Yoga Guru Ramdev released 'the first evidence-based medicine’ for COVID-19 by Patanjali.

The Health Minister in that event had said that there is a Rs 30,000 crore Ayurveda driven economy in India.

As per official data, prior to the Covid-19 pandemic, Ayurveda used to see a growth of 15-20 per cent every year, which has risen to 50-90 per cent. It's an indication that people have accepted it. There is a marked improvement in exports and FDI.

After the event, Indian Medical Association, a voluntary body of private practitioners of modern medicine, expressed “shock” and “dismay” at what it called is a “blatant lie of WHO certification” for Patanjali’s Coronil tablet.

It also demanded an explanation from Health Minister Harsh Vardhan about his presence at the event where Coronil was launched last week.

Coronil has been awarded the CoPP licence as per WHO-GMP. Dr Harsh Vardhan didn't endorse any ayurvedic medicine, neither, did he undermine the modern medicines: Acharya Balkrishna, General Secretary, Patanjali Research Foundation Trust, Haridwar over IMA on Coronil pic.twitter.com/osJQE8kO0A

The statement elaborated on the scientific credentials of the Coronil tablet and said that all the studies on the effectiveness were published in peer-reviewed journals.

The statement said that Coronil “has been validated through in-vitro in-vivo biological and chemical studies along with Randomised Controlled Trials (RCTs).”

“These studies have been conducted by following rigorous norms and regulations for biological and clinical research,” the statement reads.

It further lists research publications on the subject and says that there are 18 more publications in the pipeline.

“Coronil is an evidence-based medicine with integration of scientifically validated research evidences under pre-clinical and clinical expertise. The composition of this medicine has been revealed to the public at large, and has been thoroughly reviewed and scrutinised by competent authorities.”

“.. the contents of Coronil are clearly described on the packing, as per the regulatory requirements. Therefore, Coronil is no way a secret medicine as described by IMA officials..”

The release also gave the research publication for the randomised, placebo-controlled, double-blinded clinical trial on the COVID-19 patients.

It further stated that Dr Harsh Vardhan hadn't endorsed any ayurvedic medicine, neither, did he undermine the modern medicines. “He has done what a Health Minister should do: raise awareness of his countrymen in the face of a persistent crisis. We believe there is nothing unethical about it”.

The Indian Medical Association is often accused of advocating for the interest of big private hospitals over the common good.

In a statement it said that “IMA has fabricated the facts to make a sensational case against the health minister only to achieve cheap publicity by abusing a sincere dedicated and honest member of IMA who has brought laurels to the whole medical community by occupying the position of the union minister of health by his sheer hard work, sincerity and integrity”.